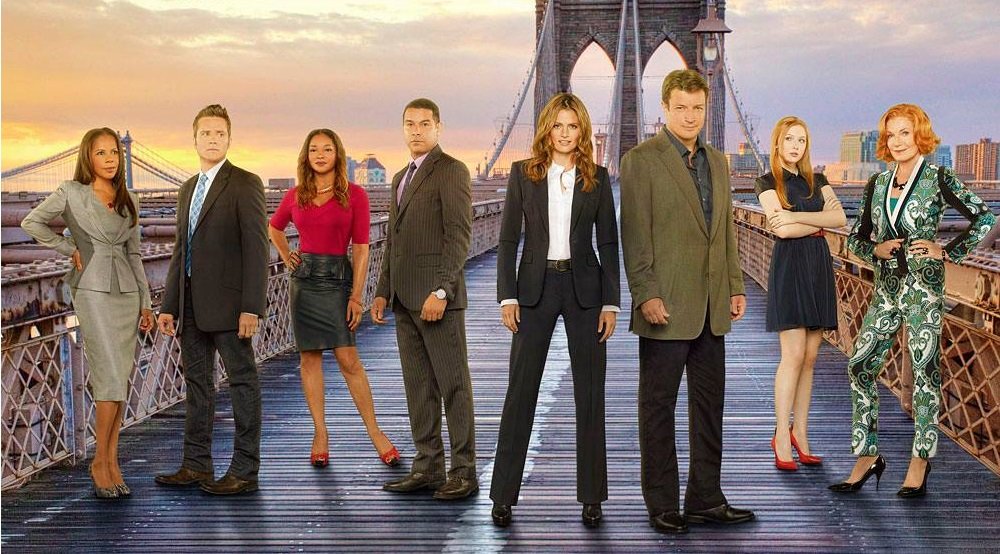 At first glance, Castle (2009-2016) might look like just another crime procedural that arrived in the midst of a culture CSI spin-offs and knock-offs, many of them centered in a genius with a particular skill that turned out to be essential to solving the crime of the week. Close, but not quite.

The “fresh twist” to the familiar genre is that the particular expertise of Richard Castle (Nathan Fillion) is the free-wheeling creativity of a fiction writer who looks at every mystery as a plot and looks for the motivations and structure that would make it into a great story. He meets Detective Kate Beckett (Stana Katic) when a serial killer starts reenacting murders from his novels and she brings him in for questioning. It’s the beginning of a beautiful partnership.

Fun-loving celebrity novelist needs ideas for a new book series. He finds his inspiration is the tough, talented (and yes, gorgeous) squad leader Beckett and his fame and connections get him a spot (as “consultant”) on her team. She’s reluctant at first and is often exasperated—his boyish enthusiasm and complete lack of discipline clashes with her professionalism, complete with banter right out of an old Hollywood romantic comedy—but they immediately make a likeable duo. Meanwhile he quickly develops his own just-us-guys style with junior detectives Esposito and Ryan (Jon Huertas and Seamus Dever, who click as Beckett’s team) and he even grows on the obligatory tough but paternal boss, Captain Montgomery (Ruben Santiago-Hudson).

In a TV crime show culture of geek-speak procedurals filled with jargon and dubious science, this leans on personality and lighthearted character-based writing. The colorfully improbable plots are really just entertaining backdrops for the characters to banter and spar their way through, but they each carry moments of whimsy and many inspire Castle to let his inner geek loose. Creator Andrew W. Marlowe took his inspiration from seventies detective shows and pays tribute to his inspiration by casting Stephen J. Cannell in the show (as himself, a mystery-writing buddy to Castle), along with real-life authors James Patterson and Michael Connelly.

But I also appreciate that Castle is the single father of a devoted, smart, responsible daughter (Molly Quinn) growing up way too fast for his comfort (“At least one of you is,” remarks his equally self-absorbed drama queen of a mother). Their chemistry gives the cute scenes a familial devotion; you can buy Castle as her father and Quinn as a teenage daughter who is more adult than he is. And while Katic may look like a model (she dresses awfully well for an NYPD detective), she has the strength of presence to hold her own against Fillion’s devil-may-care energy.

The show finds its balance through season one as they settle into an odd couple partnership with a touch of flirtation. Behind the romantic tension is a winning friendship between two very attractive people who clearly enjoy one another’s company and that rapport makes the show and it homes in on the chemistry even more in the second season. The mysteries are still more like puzzles than real police cases and the writing is terribly cute but the show adds an undercurrent of drama with the continuing investigation into the murder of Beckett’s mother.

Season four introduces a new Captain (Penny Johnson) who is a stickler for procedure, not that it will in any way douse the enthusiasm of Castle, Adam Baldwin (Fillion’s Firefly costar) appears in a couple of episodes as the colorful and reckless maverick Detective Slaughter, and James Brolin appears late in the series as Castle’s long-absent father. The show continues to revisit the unsolved murder of Beckett’s mother, which winds into a dangerous conspiracy, but otherwise, it’s a lighthearted procedural that scores stronger on character and banter and enviable chemistry, and not just between the leads. Huertas and Dever establish themselves as essential members of the team as their characters are given room to grow and Sullivan evolves the character of Castle’s mother from flighty comic relief to reflective and supportive mom. And, of course, the slow, simmering romantic dance between Castle and Beckett catches fire and burns through the obstacles the show tosses in their way.

Sadly, the eighth and final season loses much of the magic when Stana Katic takes a smaller role in the show and a new character—former British special agent turned private contractor Hayley Shipton (Toks Olagundoye)—joins the cast to give Castle someone to work with and bounce off of.

Castle is at its best when the writing leans into the self-awareness with mysteries built around increasingly playful situations and gimmicky twists. There’s a missing mummy in “Wrapped Up in Death” (Season 2), a possible zombie in “Undead Again” (Season 4), a murder at a science fiction convention in “The Final Frontier” (Season 5), a twist on Hitchcock’s Rear Window in “The Lives of Others” with Castle stuck in his apartment with a broken leg watching what he’s convinced is a murder play out across the street (Season 5), and a honeymoon spent solving a murder in an Old West town in “Once Upon a Time in the West” (Season 7).

This is crime TV at its breeziest, a self-aware show with a lively team camaraderie and a sense of humor about itself. The crimes all have some kind of clever twist right out of a supermarket mystery paperback and the alchemy of witty dialogue, colorful mysteries, romantic tension, and stylish action makes them bounce. It’s a lot of fun.

A bit of trivia: the show’s production designer Alfred Sole was a director before embarking on a career in production design on TV shows, and among his films is the cult horror thriller Alice, Sweet Alice (1976) with Brooke Shields.