For Kung Fu Yoga (China, 2017), Jackie Chan returns to the Indiana Jones-inspired adventure comedy of his 1986 hit Armour of God, albeit as an older, more modest archaeologist adventurer, for this co-production between China and India. Jackie is Professor Jack Chan, ostensibly the same character he played in The Myth, who is lured back […]

Snake in the Eagle’s Shadow / Drunken Master (Twilight Time) Boyish, baby-faced Jackie Chan trained at the famed Peking Opera Academy, had an early career as a stunt man, supporting player and fight choreographer in scores of Hong Kong films, and was unexpectedly chosen as “the next Bruce Lee” in a series of stiff, serious […] 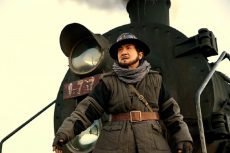 Jackie Chan stars in Railroad Tigers (China, 2016) as the leader of a scruffy band of rural railroad porters who stage raids on Japanese trains running through occupied China in World War II. They drop into moving trains, steal food for the villagers, and leave their mark by drawing flying tigers on the bodies of […]

It took so long for Hollywood to finally find a way to harness the unique mix of martial arts mastery, dance-like grace, playful humor, and giddy charm that had made Jackie Chan a superstar throughout the rest of the world that he was almost too old to show off the extent of his physical prowess […]

Come Drink with Me (Hong Kong, 1966) is a landmark of Hong Kong cinema and a classic of the wuxia pian (“martial chivalry” genre), a genre that director King Hu redefined with this delightfully spry mix of action, humor, and costume spectacle. Cheng Pei-Pei stars as the pixie-ish Golden Swallow, a determined young female warrior […]

Ong-Bak 2: The Beginning (Thailand, 2008) is a prequel in name only to Ong-Bak (2003), sharing only the title and star Tony Jaa from the original international martial arts hit from Thailand. Set some 500 years ago in 15th Century Thailand, this revenge thriller stirs up almost non-stop action with a swirl of flashbacks, a […]

Tony Jaa, the stocky Thai stuntman turned action hero in Ong-Bak: The Thai Warrior (Thailand, 2003), harkens back to an earlier kind of screen martial artist. Jaa has an impressive physique, a steel snap to his delivery, and a gymnastic prowess to his style, and director Prachya Pinkaew puts it all on display in an […]

Sword Master (Hong Kong, 2016) – Before he stepped behind the camera, director Derek Yee was the star of scores of martial arts dramas, among them the 1977 Shaw Brothers epic Death Duel. He directs the remake, which is produced by Tsui Hark, which evokes the romantic chivalry of the wuxia genre in a lavish, […]

A lavish but derivative martial arts action drama, Call of Heroes (Hong Kong, 2016) stars Sean Lau (Lau Ching-wan, Life Without Principle) as the sheriff of a village left unprotected by the army as a warlord advances and Louis Koo (Drug War) as the warlord’s sadistic son, a grinning psychopath who kills with impunity until […]

The Bodyguard (2016), originally titled My Beloved Bodyguard, is directed by Hong Kong martial arts legend Sammo Hung, who also stars as a retired special agent in a small town who is roused back into action when mobsters threaten the life of a young girl (Jacqueline Chan). He’s become a kind of adopted grandad; her […]