Splice (2009) – Professional partners and happily unmarried couple Clive and Elsa (Adrien Brody and Sarah Polley) don’t need children. They procreate with genetic experiments—splicing DNA from a dozen animals into a lab-created life-form they hope to harvest for pharmaceutical properties—and their masterpiece is a pirate side-project involving human DNA spliced into their zoological genetic […]

Cloud Atlas (2012) wants nothing for ambition. Jumping between six distinctive stories in six different eras, with a cast that plays different (yet connected) parts in the various storyline, it’s at once literal and evasive, a film that wears its heart on its beautifully stitched sleeve and its meaning in its design and yet finds […] 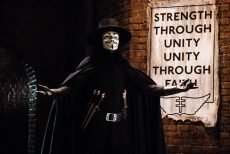 V For Vendetta (2005) – “People shouldn’t be afraid of their government. The government should be afraid of the people.” His name is nowhere to be seen in the credits but this futuristic thriller about an authoritarian government out of 1984 and a lone revolutionary who takes them on comes from Alan Moore’s acclaimed graphic […] 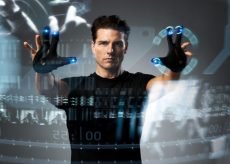 Steven Spielberg’s future shock crime thriller Minority Report (2002), based on a story by sci-fi visionary Philip K. Dick, offers law enforcement as a preventative force managed by drugged-into-submission psychics: they predict a murder and the cops arrest the perpetrator before he perpetrates anything. The names of the potential killers and victims roll out of […]

Rogue One: A Star Wars Story (2016) is exactly as the title promises. Set in the margins of the original Star Wars, it stars starring Felicity Jones as Jyn Erso, an orphaned survivor living on the fringes of Empire-controlled territory. Part scavenger opportunist and part scheming survivor, she’s been raised in hiding by a revolutionary […]

X-Men: First Class (2011) is both a reboot and a prequel to the big screen comic book series about a team of mutant superheroes with new, younger models of the series elders Charles “Professor X” Xavier (James McAvoy as a flirtatious, precocious incarnation of Patrick Stewart’s more professorial figure) and Erik “Magneto” Lehnsherr (Michael Fassbender, […]

E.T. the Extra-Terrestrial (1982), Steven Spielberg’s suburban fairy tale for kids who think they are too hip to believe in fairies, is as glorious as ever 35 years after its debut. Henry Thomas is Elliot, an emotionally bruised kid suffering under his parents’ separation who finds another lonely, lost soul, a benevolent alien left behind […]

The aliens arrived almost thirty years ago, their crippled spacecraft hovering to a halt over Johannesburg, where it remains floating over the city. That defining image hovers over the entirety of District 9 (2009), a savagely whipsmart satire of first contact with an alien species that has been reduced to repressed immigrant population stranded in […]

Alice Woodard (Emily Beecham) is a single mother and a top plant breeder at a corporate bio-engineering lab. She is so focused on her work that her teenage son Joe (Kit Connor) is used to being second in her life, so she breaks protocol and takes home one of her new creations: a beautiful but […]