Steve Carell heads up Space Force, an original comedy created by Carell’s The Office-mate Greg Daniels, and Ryan Murphy offers his take on Hollywood in his 1940s period piece series starring Darren Criss, Patti Lupone, and Samara Weaving, two of the new shows launching on Netflix in May. Other new shows include the limited series […]

Rocketman, a rock and roll musical retelling of the life of Elton John starring Taron Egerton and Jamie Bell, and the Hulu Original Series The Great, a satirical look at the life and reign of Russia’s Catherine the Great starring Elle Fanning, debut for Hulu subscribers in May. Also coming next month is Solar Opposites, […]

Rocketman, a rock and roll musical retelling of the life of Elton John starring Taron Egerton and Jamie Bell, and The Goldfinch, an adaptation of the Donna Tartt novel with Nicole Kidman and Jeffrey Wright, will debut for Amazon Prime subscribers in May. Also coming next month are two new original series: Upload, a science […]

Chris Hemsworth is a black market mercenary who takes on an international drug lord in Extraction from the Marvel Universe filmmaker Joe and Anthony Russo, and Sam Claflin and Olivia Munn star in the romantic comedy Love Wedding Repeat, two of the many original features debuting on Netflix in April. Also new are the comedy […]

Rebecca Hall, Paul Schneider, and Jonathan Pryce star in Tales from the Loop, a mix of science fiction and family drama inspired by the work of Swedish artist Simon Stålenhag. The new Amazon Original series debuts in April along with the sixth season of the crime drama Bosch, based the novels by Michael Connelly. Movies […]

Bong Joon-ho’s Parasite, the South Korean social satire that won five Academy Awards, and Mrs. America, the FX on Hulu limited series about the battle over the Equal Rights Amendment in the 1970s starring Cate Blanchett as Phyllis Schlafly and Rose Byrne as Gloria Steinem, debut on Hulu in April Also coming in April are […]

Two of the most popular foreign language shows return to Netflix in March: the German murder mystery series Babylon Berlin, set during the end of the Weimar era against the rise of the Nazis, returns for its long-awaited third season (delayed from the previously announced February debut), and Kingdom, the South Korean historical drama that […]

Amazon continues to mine the classic mysteries of Agatha Christie with Agatha Christie’s The Pale Horse, a limited series starring Rufus Sewell as a murder suspect who embarks on his own investigation. It’s new to Prime Video viewers in March along with the sprawling international crime drama ZeroZeroZero with Dane DeHaan, Andrea Riseborough, and Gabriel […] 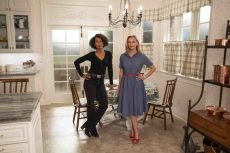 Reese Witherspoon and Kerry Washington produce and star in Little Fires Everywhere, the new Hulu Original Limited Series based on the novel by Celeste Ng. It debuts on Hulu in March along with Hillary, a documentary series on the former first lady and presidential candidate. Hulu also becomes the streaming home of the FX cable […]

Locke & Key, a supernatural family drama based on the graphic novel by Joe Hill and developed for Netflix by “Lost” showrunner Carlton Cuse, is the big Netflix debut for January but it’s not the only one by far, or even the most exciting. Anthony Mackie takes over the lead in the hit science fiction […]