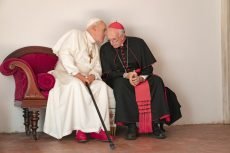 Here’s what’s new and ready to stream now on Netflix, Amazon Prime, Hulu, HBO Now, video-on-demand, and other streaming services …  The weekly column is featured in The Seattle Times, The Spokesman-Review, and other newspapers. Anthony Hopkins is Pope Benedict XVI and Jonathan Pryce plays Jorge Bergoglio, the Cardinal from South America who became his […]