Akira Kurosawa Ran (Japan, 1985), the story of an aging warlord who hands power to his sons is loosely inspired by the story of sixteenth century warlord Mōri Motonari, who conquered his rivals and extended his kingdom with the help of his three sons. The script is firmly built on King Lear, with sons taking […] 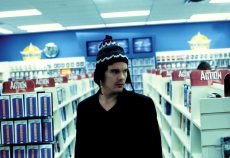 This is not your father’s Hamlet (2000). This melancholy Dane is son of the deceased Chairman of Denmark Corporation. His castle is a sleek but alienating New York high rise dotted with omnipresent surveillance cameras, his kingdom city streets lined with paparazzi and tabloid reporters. Ethan Hawke is the youngest actor to tackle the role […]

Joss Whedon shot Much Ado About Nothing (2012), his modern-dress take on the Shakespeare farce, in two weeks at his own house during down-time in the middle of making The Avengers, and his invited old friends and collaborators to join him. Angel co-stars Amy Acker and Alexis Denisof take the lead roles of Beatrice and Benedick […]