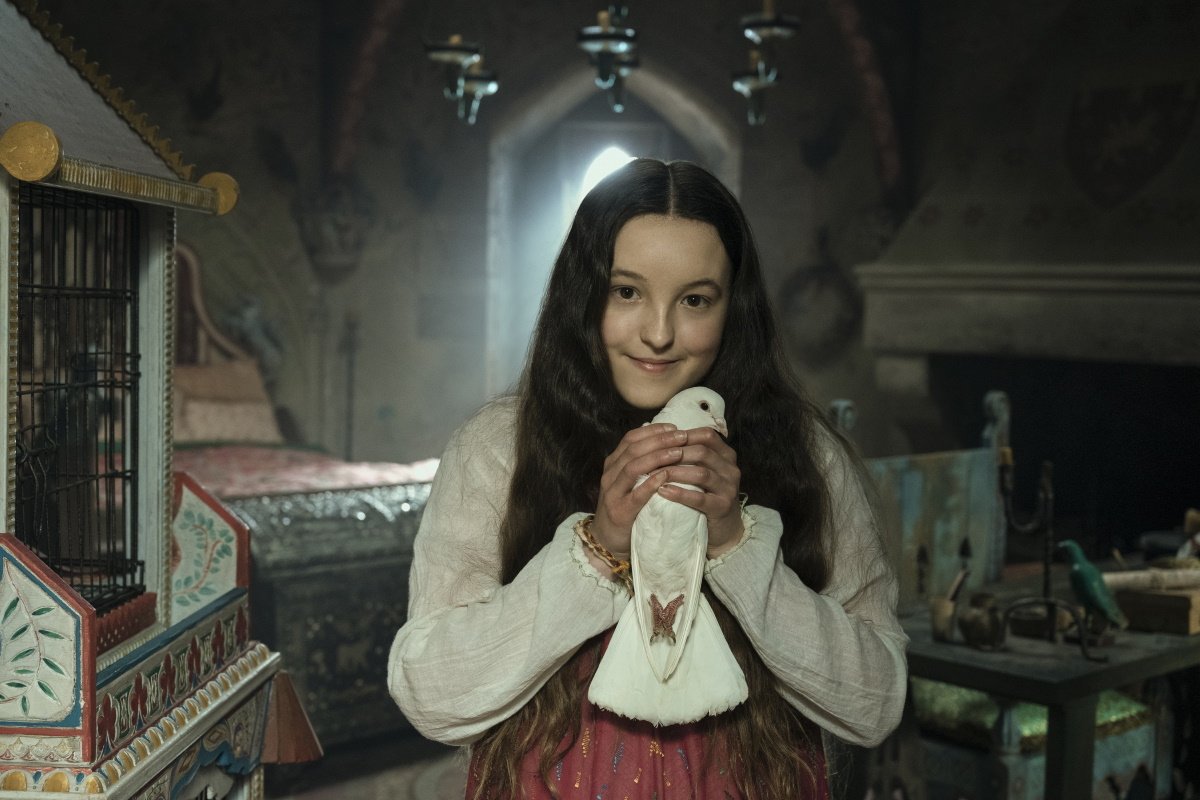 A coming-of-age story set in Medieval England, “Catherine Called Birdy” (2022, PG-13) stars Bella Ramsey as the spirited 14-year-old daughter of a penniless aristocrat (Andrew Scott) who hopes to marry her off to a wealthy husband. Birdy is a clever, curious, and headstrong young woman in a culture with no respect for women’s lives or desires, and director  Lena Dunham (who adapts the young adult by Karen Cushman) brings a witty, insightful, and raucous quality to her story. Billie Piper and Joe Alwyn costar. It streams a month after its debut at the Toronto International Film Festival. (Prime Video)

An eighties horror landmark gets revived and reinvented in “Hellraiser” (2022, R), a new take on the Clive Barker classic about a puzzle box that summons the sadistic Cenobites, interdimensional beings who feed on intense pleasure and pain. Jamie Clayton takes on the role of androgynous, interdimensional torture-master Pinhead and David Brucker (“The Ghost House”) directs. (Hulu)

The animated action comedy “DC League of Super-Pets” (2022, PG) sends Krypto the Super-Dog (voiced by Dwayne Johnson) on a mission to rescue Superman with a menagerie of super-powered but untrained animals. This family-friendly superhero movie also features the voices of Kevin Hart, Kate McKinnon, Diego Luna, and John Krasinski as Superman. (HBO Max)

Gael García Bernal is a “Werewolf by Night” (2022, TV-14) in the 52-minute “special” based on the Marvel Comics series. It’s a horror movie carved into the MCU, directed in black and white by Oscar-winning composer Michael Giacchino in tribute to classic horror movies. (Disney+)

“Anne Rice’s Interview with the Vampire: Season 1” (TV-MA) revisits the gothic novel in a new adaptation set decades after the 1994 film, with Eric Bogosian as the journalist and Jacob Anderson as the vampire. This one flashes back to 1900s New Orleans, where the black businessman has his life changed by an encounter with Lestat (Sam Reid). It debuts alongside the last eight episodes of “The Walking Dead: Final Season” (TV-MA). Both stream new episodes on Sundays. (AMC+)

Classic pick: “La ronde” (France, 1950, with subtitles) is a lovely, lyrical roundelay of couples swapping partners in a romantic dance that comes full circle with a continental flair. (HBO Max)

A young mollusk (voiced by Jenny Slate) goes in search of his family in the heartwarming comic odyssey “Marcel the Shell with Shoes On” (2022, PG).

“Minions: The Rise of Gru” (2022, PG) offers an origin story for the “Despicable Me” animated movies.

Jaeden Martell and Donald Sutherland star in “Mr. Harrigan’s Phone” (2022, PG-13), adapted from the Stephen King novella about a friendship that lasts beyond death by director John Lee Hancock.

A traumatic incident from the past resurfaces in “Luckiest Girl Alive” (2022, R), starring Mila Kunis, Finn Wittrock, and Connie Britton.

Streaming TV: “The Midnight Club: Season 1“ (TV-MA) follows teenagers at a hospice for the terminally ill who make a pact to send a sign from the other side. Also new is a reboot of the reality series “The Mole“ (TV-MA) and the Irish comedy “Derry Girls: Season 3“ (TV-MA)

True stories: survivors of natural disasters tell their stories in “The Trapped 13: How We Survived the Thai Cave“ (Thailand, TV-14, with subtitles) and “Aftershock: Everest and the Nepal Earthquake“ (TV-MA).

A young married couple on the brink of divorce resort the brutal honesty on a weekend getaway in “The Wheel“ (2021, TV-MA)

Intelligence agents from Denmark and England team up to stop a terror attack on British soil in “Red Election: Season 1“ (Sweden, not rated), an English language espionage thriller set in an alternate version of London.

More streaming TV: the Emmy-winning sitcom “Schitt’s Creek: Complete Series“ (TV-14) moves to Hulu this week and the animated “Abominable and the Invisible City: Season 1“ (TV-Y) is an adventure fantasy for kids.

“Spotlight“ (2015, R) (HBO), the story of the Boston Globe reporters who revealed the Catholic Church’s systematic cover-up of abusive priests for decades, won Oscars for best picture and original screenplay.

A young couple (Maika Monroe and Jake Lacy) backpacking in the Pacific Northwest woods discover they are not alone in the science fiction thriller “Significant Other“ (2022, R).

“Prince Andrew: Banished“ (2022, TV-MA) looks at the controversies in the life of the disgraced royal.

The horror comedy “Deadstream“ (2022, not rated) sends a disgraced internet personality to a haunted house where he livestreams his showdown with an angry spirit. (AMC+ and Shudder)

The 16 features by “Ishiro Honda: King of the Monsters,” director of the original monster movie landmark “Godzilla“ (1954), in this collection features two of the best monster mashes of the original film series, “Invasion of Astro-Monster“ (1965) and “Destroy All Monsters“ (1968), and two trippy science fiction invasion movies, “Matango“ (1963) and “Space Amoeba“ (1970). All from Japan, with subtitles.

“Three by Denis Villeneuve” includes the early French Canadian features “August 32nd on Earth“ (1998, not rated) and “Maelström“ (2000, not rated).

Barbara Bel Geddes stars in the film noir double feature “Panic in the Streets“ (1950) with Richard Widmark and Jack Palance and “Caught“ (1949) with James Mason and Robert Ryan.