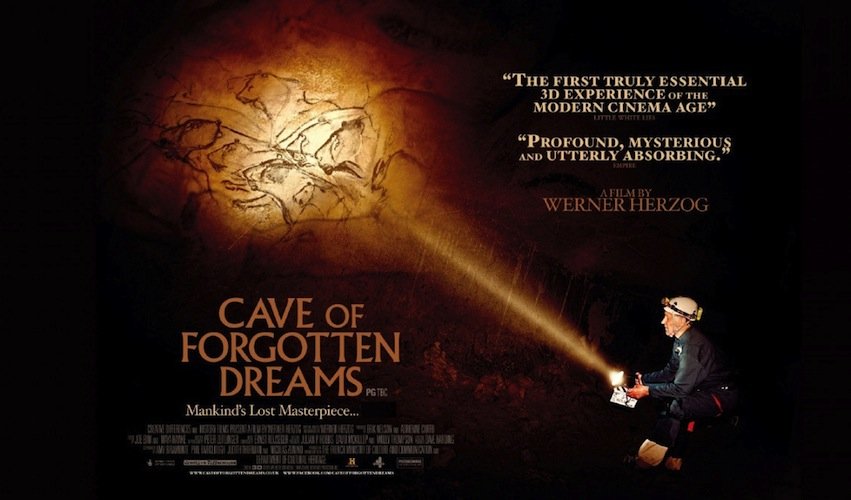 It didn’t make the final cut for the Oscar documentary shortlist but Werner Herzog’s Cave of Forgotten Dreams (2001) is a beautiful and breathtaking work of non-fiction and one of the best films of 2011.

The film is built around an exploration of the ancient Chauvet Cave, home to the oldest human artwork known to exist. Yes, we’re talking cave paintings which survived because the cave was sealed off and preserved for centuries upon centuries. It’s the cavern that time forgot and only a handful of people are allowed inside each year to maintain the conditions that have preserved these artifacts, some as old as 32,000 years. Herzog petitioned to be one of the few and brought his camera with him to share the visions with the rest of the world.

Restricted to a thin catwalk through a cave deep inside a mountain, a skeleton crew and minimal light, he does just that: capture the space, the texture, the quality of color of these ghost-like paintings, like shadows of the past captured on the cave walls. He communicates a sense of awe and wonder without any contrived dramatics and between visits to the paintings he profiles the scientists, archeologists, historians and technicians who have also been granted access. As usual, he finds great stories in these individuals.

The film was originally shot and presented in theaters in 3D (and with this one film justified the technology) but is just as revelatory in standard format.

Herzog, the most eccentric and elemental maverick of the New German Cinema, has become one of the great documentarians of our day, and he specializes in exploring the wonders of the world and the fascinating people he meets. Along with Grizzly Man (2005), which I reviewed a few months ago when it arrived on Amazon Instant Prime, here are two more stand-out non-fiction films available on Netflix.

Encounters at the End of the World (2007) opens on eerie and otherworldly underwater footage under the Antarctic ice shelf, a wet desert of sparse visible marine life cast blue by sunlight glowing through the ice above, and goes on to explore an active Antarctic volcano spewing magma into a deep lava lake. But Herzog’s encounters have less to do with the natural world than the scientists and mechanics and adventurers who live in and around McMurdo Station, the biggest human settlement in Antarctica. It looks like a muddy Alaskan mining camp, but to Herzog it’s the last frontier town, built in an environment so hostile that survival training is mandatory for any trip outside. Herzog, who narrates with his familiar blend of odd humor and curious wonder, is completely taken with these “professional dreamers” and turns his project into an engaging and generous profile of the fascinating folks who have chosen to live at the end of the world. Queue it up!

Into the Abyss (2011) grapples with the death penalty in America through a profile of the human beings on both sides of a death penalty verdict in Texas. Michael Perry, convicted of triple homicide in the course of a car theft, is clearly no innocent man and Herzog lays out the senseless brutality of the murders and the consequences of his actions through interviews with the friends and family members of the murder. His point isn’t that this is some miscarriage of justice, but of acknowledging that Perry, who was 18 when he committed his crimes, is a human being, and as Herzog says early on, “I don’t believe human beings should be executed.” It is also a devastating portrait of the culture of crime, drug and alcohol abuse, and broken families that Perry and his companions grew up in, and of the growth of Perry over his ten years on death row into an introspective, spiritual young man who acknowledges his debt (if not always his guilt). Herzog wants us to engage with the human beings on both sides of the crime and ask if this execution accomplishes anything for anyone. Queue it up!

Cave of Forgotten Dreams, Encounters at the End of the World, Into the Abyss, Werner Herzog