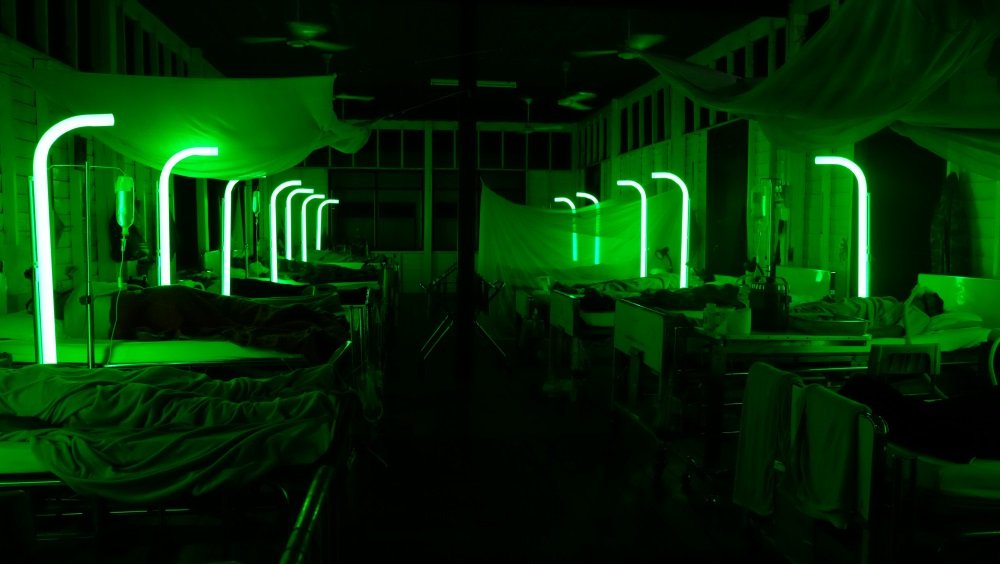 In Thailand filmmaker Apichatpong Weerasethakul’s Cemetery of Splendor (Thailand, 2015), the world we live in and the world we dream are one and the same.

An elementary school has been turned into a makeshift hospital for soldiers suffering from a mysterious sleeping sickness and Jen (Jenjira Pongpas Widner), a volunteer with a debilitating limp caused by one shortened, somewhat deformed leg, looks after one soldier, Itt (Banlop Lomnoi), who suddenly awakens as she massages his inert muscles and lotions his skin. A young psychic (Jarinpattra Rueangram) helps visitors reach their unconscious loved ones but sometimes slips into their past lives. And when two friendly girls confess to being the temporary human incarnation of the goddesses of the nearby shrine, Jen is only momentarily suspicious. She wants to make sure they are actually the goddesses to whom she has given offerings and not simply a couple of girls having a laugh. Assured of their identity, she remarks to her friends how their skin glows for such ancient beings.

American audiences might think her gullible but in this culture, the natural and the supernatural are intertwined. As in Weerasethakul’s previous feature, the award-winning Uncle Boonmee, Who Can Recall his Past Lives, Cemetery of Splendor is a gentle meditation on the way the past inhabits the present and the physical world reverberates with the spiritual. It is real and unreal, accomplished with a heightened naturalism that makes this rural retreat richly present and tactile but with a sense of mystery. The beds of sleeping men are lined up in rooms covered in blackboards and letter charts and student artwork on the walls as if elementary school classes were just dismissed, the building surrounded by playgrounds decorated with dinosaur sculptures and forests where the angels and skeletons of gravestones stand watch. The school is built, we are told, on the site of an ancient palace and the ancient royals have drafted the spirits of these modern soldiers to fight their ghostly battled. The color is both natural and supernatural, with the florescent tubes that sprout between beds like trees glowing with neon hues that shift, a form of color therapy that could be the work of playful ghosts or the psychic emanations of the collective unconscious.

There is discussion of cultural and physical differences between the inhabitants of different regions (a TV pitchwoman uses those differences to sell youth cream) and I’ve been led to understand that the details reverberate with political allegory. Those cultural specifics are beyond me but the spiritual and human elements are entrancing and Weerasethakul’s dreamy filmmaking, which moves along at a pace that many would call slow but I find easy and entrancing, is beautiful and mysterious and sad and elevating. Cemetery of Splendor is enigmatic but welcoming, inviting the viewer to enter the world, experience its pace of life, and explore the ephemeral connections and spiritual mysteries and human emotions that are part of the same ecosystem of existence. It is not for people who need explanation and action and a story that can be easily understood. This is for people who want to open themselves to mystery and revel in the possibilities of meaning and the beauty of the journey. I can’t explain the experience of Cemetery of Splendor, but I know I want to experience it again. Weerasethakul connects to a kind of magic that few movies remember.

In Thai with English subtitles.

It’s part of the collection “Meet the Filmmakers: Apichatpong Weerasethakul.”

, iTunes, GooglePlay and/or other services. Availability may vary by service.
Cemetery of Splendor [DVD]

Pingback: What to watch: Albert Brooks on Netflix, 'Kung Fu Panda 3' on VOD, and scores of new titles on Amazon, Netflix, and Hulu - Stream On Demand
Comments are closed.