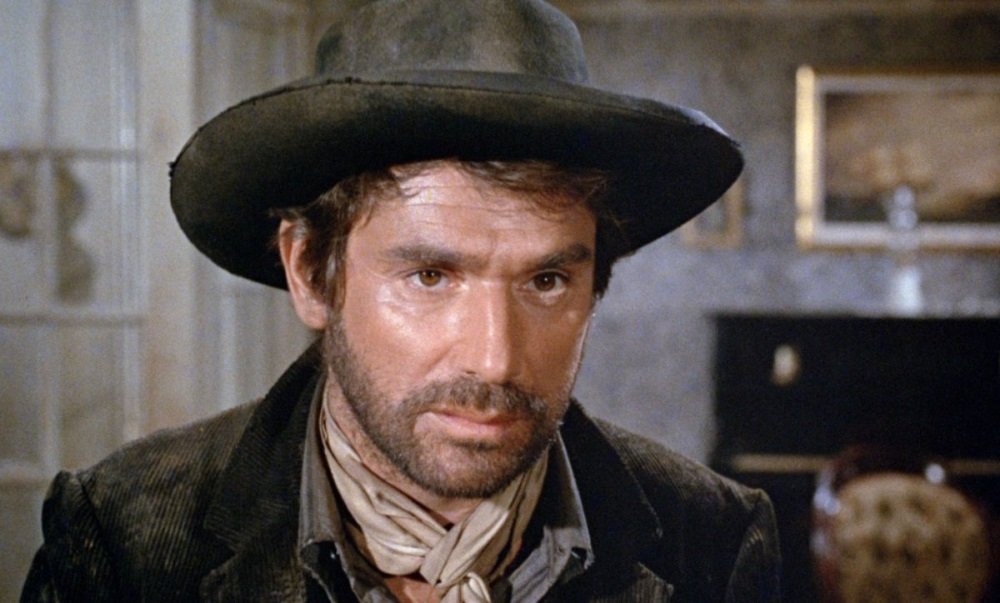 A spaghetti western with French seasonings, Cemetery Without Crosses (1969) is a Franco-Italian co-production shot in Almeria, Spain, the definitive badlands landscape of the Euro-western. The director, screenwriters, two stars, and even composer are French and the supporting cast largely Italian. And while this is not shot in the widescreen dimension of CinemaScope, de rigueur for genre, is features the familiar conventions: taciturn anti-hero, bleak desert setting, spare style, mercenary characters, and a culture so steeped in corruption that the closest we get to justice is justified vengeance.

French movie star turned filmmaker Robert Hossein helms the film and casts Michèle Mercier, with whom he starred in a successful series of historical romances in France, as a frontier woman who is widowed in the first scene. The Rogers clan, the ruthless land barons of the territory, have been trying to drive them out of. When Maria’s husband and his two brothers rob the Rogers, they have all the excuse they need to execute him right in front of her eyes. Hungry for vengeance, she seeks out Manuel (Hossein), who lives in the saloon of a ghost town that looks like the abandoned set of some earlier western, not just empty but in the process of being reclaimed by the wind and the sand. He says that he’s hung up the gun but is coaxed into taking her job, in part by her husband’s share of the robbery, in part by whatever unspoken past is churned up in their long, lingering glances.

It’s a revenge western, as so many Italian westerns were, but this vengeance is soaked in loss and regret and the man who carries out Maria’s revenge does so without emotion: no satisfaction, just a blank-faced sense of purpose and eyes suffused in melancholy. “Revenge is a bitter seed,” Manuel warns Maria early on, and of course he’s right. Hossein’s Manuel has the wind-scoured face of a man of action and the expression of someone who has seen too much killing and his ritual of donning a single black glove and then firing his gun with his other hand adds a ceremonial touch to death (as well as homage to Fritz Lang, a filmmaker who appreciated killers with a single gloved hand). The dead man’s brothers are jackals of another sort who take their revenge on the lone daughter of the Rogers clan with far too much glee (an act that Manuel tacitly endorses even if he doesn’t participate) and then cowardly betray their own. The Rogers return the favor out of pure cussedness.

The original French title was A Rope, a Colt…, echoed in the theme song “The Rope and the Colt” (sung in English by Scott Walker), which cuts right to the tools of the trade, and they are prominent in the film as is the desolation of the landscape (as if playing out in a world abandoned by society and any accompanying morality) and the unreal soundtrack of post-dubbed dialogue cutting through the eerie desert stillness filled with the exaggerated stock sound effects of boot heels on floorboards, guns being cocked and fired, and a lonely wind howling just outside. Long sequences play out without a word spoken, only shifting glances and guarded expressions. The score by the director’s father, André Hossein, echoes the style of the Italian composers with some lovely Spanish guitar carrying the melody. It’s both a satisfying evocation of the classic spaghetti western and a variation on it with a sense of doom right out of French gangster dramas.

The American home video debut of the film is restored from a 35mm internegative in 2K resolution, but those elements are clearly in poor shape. There’s damage and wear at the reel ends and chemical degradation and staining in sections, resulting in an occasionally splotchy image. According to the release notes, this was the best source that could be found, and given Arrow’s track record of superior presentation, I give them due credit for tracking down the materials and doing the best they could short of a full-blown restoration. Given those issues, the image is quite strong in the undamaged sequences and the clarity brings out the detail.

Features both original Italian and English language soundtracks with optional English subtitles. The five-minute “Remembering Sergio” is a new interview with Robert Hossein, who informs us that he was originally cast in a supporting role in Leone’s Once Upon a Time in the West but was unable to appear, and that Leone directed one scene of this film for Hossein (I’ll let which one be a surprise). Also features a very brief archival interview with Hossein and an eight-minute “Location Report” from French TV, both from 1968, and a trailer. The accompanying booklet features an essay on the film by French film scholar Ginette Vincendeau and a shorter piece on Scott Walker (who sings the theme song) by Rob Young.