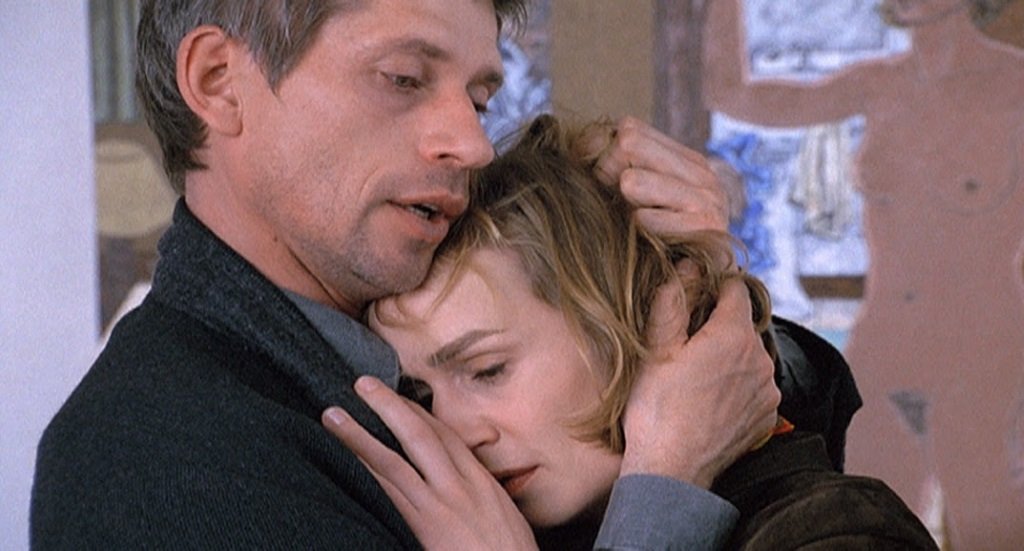 Claude Chabrol’s The Color of Lies (1999) arrived forty years after his debut feature, but the old man still had more than a decade filmmaking left in him.

Chabrol had always been more interested in character than plot and psychology than suspense and The Color of Lies, which opens on the murder of a child, uses the mystery as the frame around a character study and social portrait of a small seaside community. Jacques Gamblin plays the prime suspect, a depressed artist making ends meet giving art lessons to local kids, and Sandrine Bonnaire is his supportive but frustrated wife, the breadwinner of the two and a sunny optimist to his gloomy, self-defeating hermit. No wonder she’s attracted to local celebrity Germain-Roland Desmot (Antoine de Caunes), a confident, charming self-promoter that even the newly-posted police inspector (Valeria Bruni Tedeschi) immediately pegs as “a snake.”

The murder and investigation is largely in the background. This isn’t like the recent Broadchurch, where the shadow of a child murder hangs over every conversation and meeting; the reverberations are more insidious, the suspicions of Gamblin sneaking into scenes and tipping him into martyrdom. In fact, a rash of robberies of artworks and artifacts is as big a priority for the stymied inspector as the murder investigation, which grinds to a halt for lack of clues and evidence. Chabrol could do the traditional murder mystery and detective procedural as well as anyone (just look at his Inspector Lavardin films) but this is something else, a low-key study in suspicion, mistrust and small-town gossip where the details are suggested more than stated.

Watch it on Sundance Now

, iTunes, GooglePlay and other services. Availability may vary by service.
The Color of Lies [Blu-ray]

The Color of Lies [DVD]

The Cohen DVD and Blu-ray release features a new HD transfer and is a huge improvement over the previous DVD. Features commentary by film critics Wade Major and Andy Klein and a booklet with film stills (but no notes). Note that the film is actually 113 minutes, not 103 minutes as listed on the case.