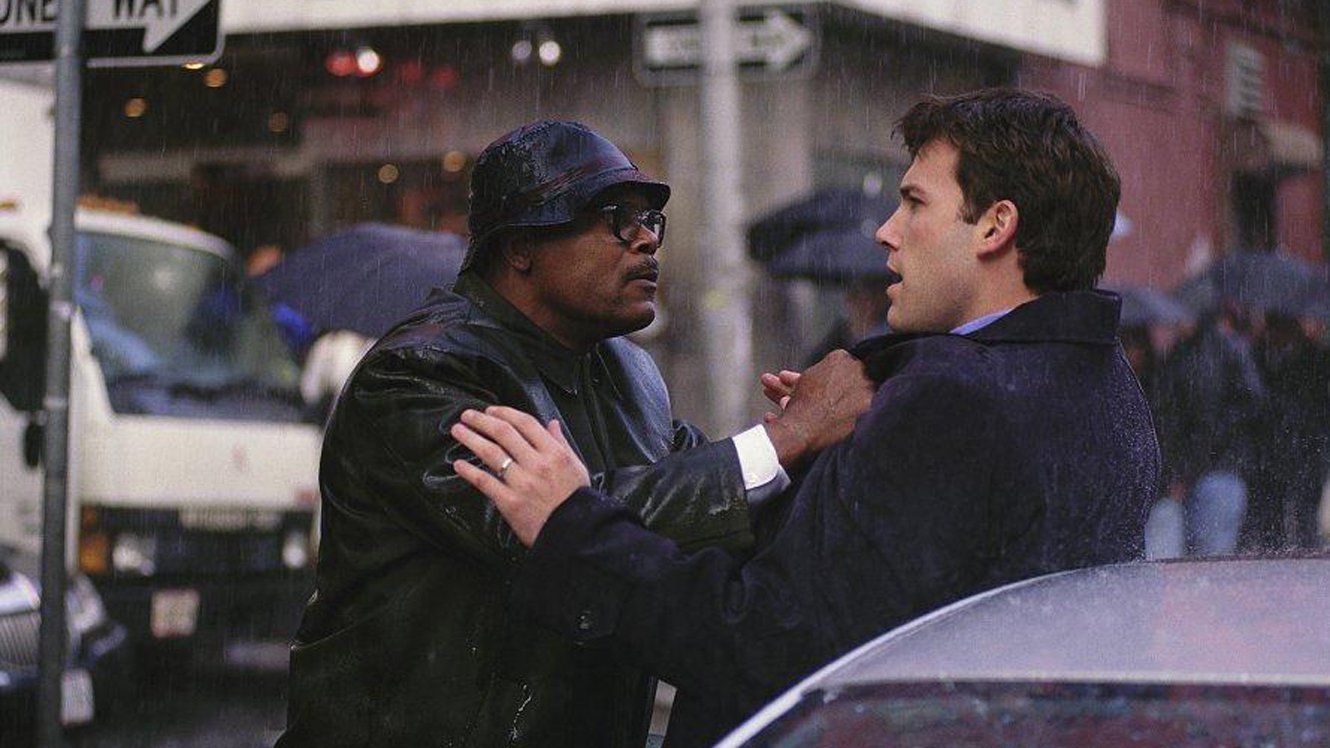 Samuel L. Jackson is a recovering alcoholic whose sincere efforts to put his life back together is frustrated by unresolved anger and a self-righteous sense of vengeance. Ben Affleck is a smug, self-absorbed lawyer who refuses to accept culpability for his moral lapses and deals with his pangs of guilt by going on the attack. Believe it or not, they are the heroes of Changing Lanes (2002), a dark look at two men whose collision sparks a war of destructive one-upmanship that unravels their lives and, worse, their humanity.

Directed by Roger Michell, best known for his British period pieces and romantic dramas, Changing Lanes is an overlooked film that delves into anger management, revenge, and culpability.

Affleck is well cast as Gavin Banek, a young attorney and “master of the universe in training” who marries into a high-powered firm and checks his morals at the door as he watches how the game is played at the highest levels of power. His major role model is his corrupt father-in-law (Sidney Pollack). Callous, self-absorbed, and torn between wanting to be liked and sacrificing his ideals to rise up the ladder, Gavin blows off Doyle Gipson (Samuel L. Jackson) after he (accidentally) runs him into a traffic divider rushing to meet a court date. He’s in too much of a hurry to share his insurance information or name and number and even refuses the man a ride.

Doyle is doing what he can to pull his life together and keep his family from leaving him: going to AA, buying a house, and trying be a good father. But when he misses his court appointment by twenty minutes, by which time his wife has been granted sole custody of their children, his careful tapestry starts to unravel. He focuses his rage on Gavin, who inadvertently left an important legal document behind when he fled the scene of the accident.

This is the rare Hollywood film that deals with both the violence and turmoil and the regret these men face when they slow to catch their breath. The screenplay was reworked by Michael Tolkin, who gives is an edge and grit not seen in most Hollywood dramas. It also gave Affleck one of his best roles and he taps into his dark side to play a petty rageaholic. And Jackson rides a rollercoaster of emotion as he rises to a peak of destructive revenge and then calms to a clear-thinking, rational state where the anger no longer rules and he tries to do the right thing, only to have his fuse lit by another vicious attack upon him.

It’s searing for most the emotional ride, with some genuinely chilling moments of impulsive human malevolence and a morally ambiguous climax that twists the knife of poetic justice. Even the contrived happy coda concludes in the key of doubt in this underrated thriller.

Also on Blu-ray and DVD and on SVOD through Amazon Video, iTunes, GooglePlay, Fandango, Vudu and/or other services. Availability may vary by service.
Changing Lanes [Blu-ray]
Changing Lanes [DVD]

The Blu-ray and DVD editions include commentary by director Roger Michell, the documentary featurettes The Making of Changing Lanes (15 minutes) and A Writer’s Perspective (6 minutes of the writers ruminating on character, motivation, and theme), two deleted scenes, one extended scene, and the trailer.