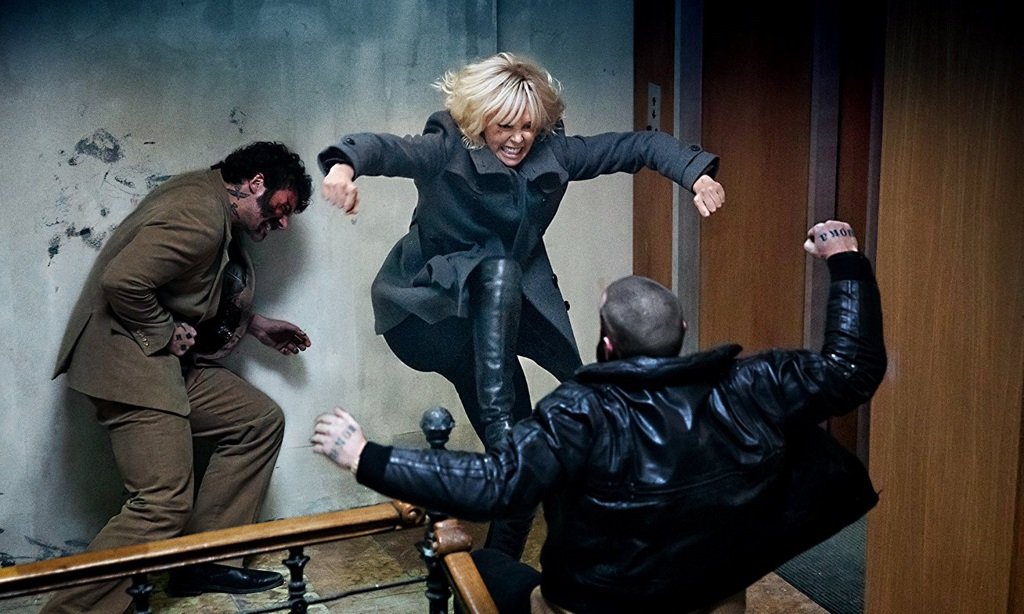 Lean, mean, swift, and sure, Atomic Blonde (2017) is the kind of action movie we need in the contemporary morass of CGIed to mush spectacle. That’s not to say it eschews digital effects but director David Leitch, a co-creator and uncredited co-director of John Wick and a veteran stuntman and stunt choreographer, uses digital manipulation to enhance the spectacle of physical action by flesh and blood actors and stunt artists.

Charlize Theron, coming off her impressive turn in Mad Max: Fury Road, solidifies her second-act career reinvention as a ferocious action movie star in the role of hard-bitten MI6 agent Lorraine Broughton, sent to Germany after Britain’s man in Berlin has been murdered trying to get a Stasi informant (Eddie Marsan) out of East Germany. It’s 1989, in the last days of a divided Berlin. The shady MI6 station chief Percival (James McAvoy) is no chivalrous knight—he’s practically gone native as an underground intelligence broker, a job may once have been a cover but now looks like a new career—and there’s another player complicating the Cold War battle.

Clearly something goes sideways on the mission—it’s all presented in flashback, framed by Lorraine’s interrogation by both MI6 (Toby Jones) and CIA (John Goodman) bigwigs, both so hostile you assume there’s something personal underneath it all—and we anticipate disaster around the corner of every action scene. And the film is full of them. The script, adapted from a graphic novel, is a cynical, serviceable framework for action, both in signature set-pieces (the jaw-dropping stairwell fight, a sustained single-shot sequence that sets Lorraine against a small army of KGB thugs) and in the fluidity of film’s transitions from drama and exposition to action and back. That’s not to say the style is necessarily sophisticated or innovative, but it makes the most of its graphic novel origins to chop the narrative into swift, sharp sequences and stitch them together with graphic flourish. Behind the stylistic flash is back-to-the-basics visual storytelling. It’s all about movement and action, the camera focusing on bodies in motion at work, at play, at rest.

Which makes Theron’s Lorraine the most unexpectedly expressive character in the secret agent free-for-all. Sleek and steely and sinewy, she’s a marvel in action and a pro on job, guarding her feelings but suggesting everything from wary distrust to disillusionment to playful excitement in her body language. We see the cost of her commitment, a body left blue and bruised after each battle, but we never see her commitment flag.

Set to a score of eighties new wave pop hits and driven at a pace that helps whiz by the creaky plot mechanics, it’s a pop action confection, all adrenaline and momentum and style grounded in the icy stare and furious moves of Theron. Given all that, and a springboard twist in final minutes, it’s surely up for a sequel. I’m up for a series featuring Theron as an icy distaff answer to James Bond kicking ass through eighties Europe.

, iTunes, GooglePlay and/or other services. Availability may vary by service.
Atomic Blonde [Blu-ray]

The DVD and Blu-ray from Universal Pictures Home Entertainment features commentary by director David Leitch and editor Elísabet Ronaldsdóttir and animated storyboards for two sequences with optional commentary by Leitch. The film’s spotlight fight sequence in the stairwell, presented as a single, unbroken shot, is the focus of the 8-minute featurette “Anatomy of a Fight Scene,” Charlize Theron discusses the film in “Blondes Have More Gun” (7 mins), and there are shorter featurettes on the 1989 Berlin setting and film’s production design (“Welcome to Berlin”) and director Leitch (“Spymaster”), plus 7 minutes of deleted / extended scenes. The Blu-ray edition also includes bonus DVD and Ultraviolet HD Digital copies of the film.