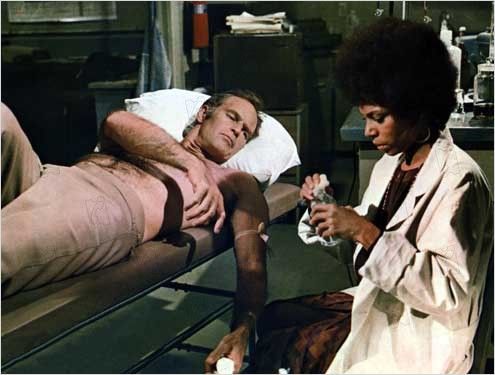 The story of the last human in a world decimated by plague, The Omega Man (1971) is the second film based on Richard Matheson’s haunting novel I Am Legend.

Charlton Heston stars as Robert Neville, the last man on Earth, or so he thinks. By day, he hunts and exterminates all the sun-shunning mutants he finds hiding in the shadows, and by night they come out and try to kill him. Then he sees a woman walking the city in daylight. Lisa (Rosalind Cash) is the first uninfected person he’s met since the biological weapons were unleashed and he joins her efforts to help a small band of humans searching for a cure. Anthony Zerbe is the sinister leader of the cult-like plague people. leading his flock in a war against the defiant survivor Neville and the culture he represents: science, technology, art, culture.

Where the novel and the first adaptation (The Last Man on Earth with Vincent Price) presents the rest of the survivors as victims infected with vampire-like symptoms, this film transforms the plague into germ warfare and the monstrous survivors into albino night dwellers, a mutant breed by way of a religious cult that sees humanity as the real plague.

The Omega Man was shot in Los Angeles, which director Boris Sagal was able to transform into a vacant urban ghost city eerily empty of human activity. It’s by far the film’s most evocative special effect. The rest is a slice of seventies apocalypse with Heston as the brawny hero at the center, speeding sports cars down abandoned streets with the reckless zeal of an anarchist and, in one of the film’s signature scenes, screening the concert movie Woodstock for himself, watching the ghosts of past crowds in a empty theater.

Matheson’s novel was remade once again in 2007 under its original title with Will Smith in the lead.

Leaves HBO Max at the end of July. Add to My List on HBO Max

, iTunes, GooglePlay and/or other services. Availability may vary by service.
The Omega Man [Blu-ray]

The Blu-ray and DVD releases from Warner Home Video offer no supplements.