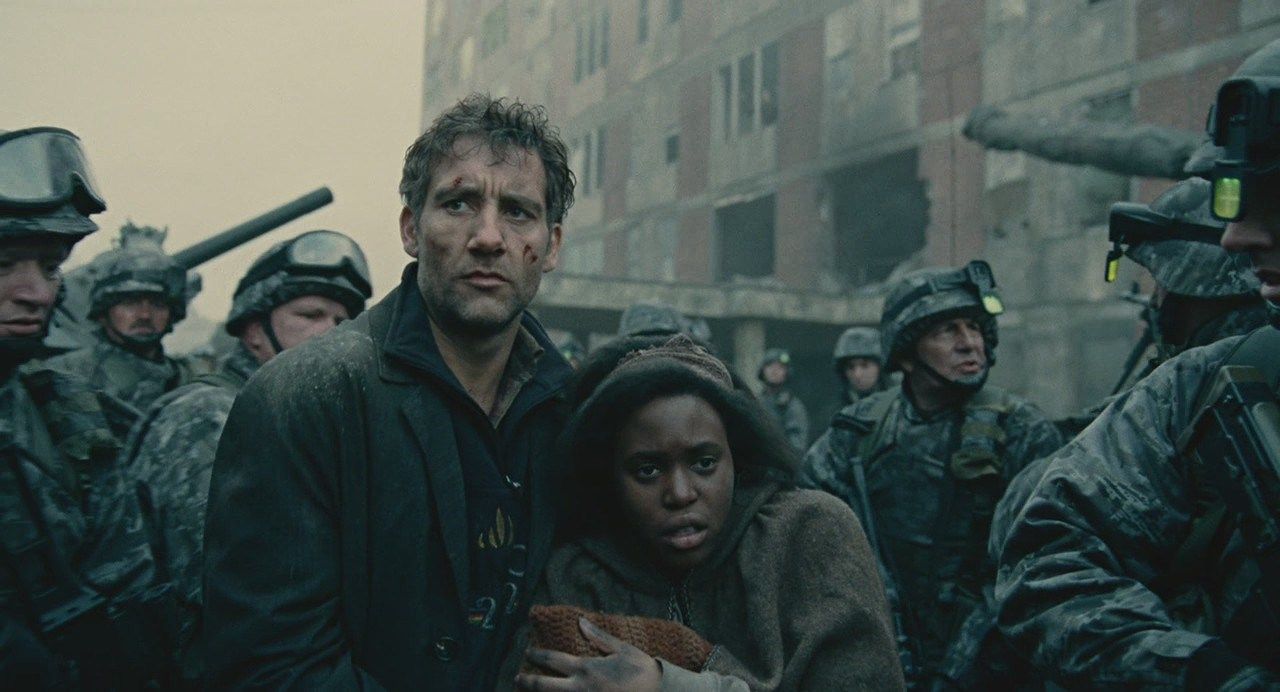 Children of Men (2007), Alfonso Cuaron’s adaptation of by P.D. James’ dystopian thriller, is set in a bleak, impoverished near future where two decades of infertility have created a mood of hopelessness as devastating and destructive as a nuclear holocaust. Britain has thrown up walls around the borders and is actively deporting immigrants, becoming a police state to protect itself from the violence and the poverty of the rest of the world. (Has this film become more relevant now than it was in 2007?)

It’s snuffed the spark out of former activist Theo (Clive Owen), who has effectively disconnected from the world until he’s recruited by his ex-wife (Julianne Moore), now a revolutionary leader, for mission to protect a miracle as great as the second coming: a pregnant woman (Clare-Hope Ashitey) who needs his help to escape a world that would turn the miracle into a political weapon.

Beautifully directed and magnificently crafted, it’s a wrenching thriller in a grimy world of industrial decay, a distorted mirror of today in a palette of cement dust. Cuaron and his brilliant cinematographer Emmanuel Lubezki (who was nominated for an Oscar) create a powerful immediacy with long takes and hand-held camerawork that sweeps us along with Theo. True to Cuaron’s sensibility, the film is a road movie powered by the spark of hope, a primal emotion that Cuaron makes palpable in the riveting final scenes as warring fighters are left dumbstruck and awed in the presence of new life.

Michael Caine has a terrific role as a hippie holdout in the wilderness with his own greenhouse food supply and a side business growing pot, and it costars Chiwetel Ejiofor a soldier with his own ideas and Peter Mullan as an immigration cop who talks about himself in third person.

It was nominated for three Academy Awards, for screenplay adaptation, cinematography, and film editing, and won BAFTAs for cinematography and production design. Both Cuaron and Lubezki went on to win Oscars for their work in their next collaboration: Gravity.

Leaves Hulu at the end of November. Add to My Stuff on Hulu

, iTunes, GooglePlay and/or other services. Availability may vary by service.
Children of Men [Blu-ray]

The Blu-ray and DVD from Universal Home Video feature the 27-minute “The Possibility of Hope,” which ruminates on the themes of the film through interviews with philosophers and theorists and other thinkers reflecting on the idea of hope and despair in the modern world. Cuaron illustrates their ideas with images from the film and documentary footage of poverty, pollution, natural devastation, and human alienation that shows just how close his future really is. Also includes a couple of brief deleted scenes and a handful of more conventional but smartly done “behind-the-scenes” featurettes. The most illuminating is “Under Attack,” which reveals the ingenious solution to shooting a fluid long take from the inside of a car and reminds us just how much the elaborate techniques focus the viewer on the characters rather than the style.