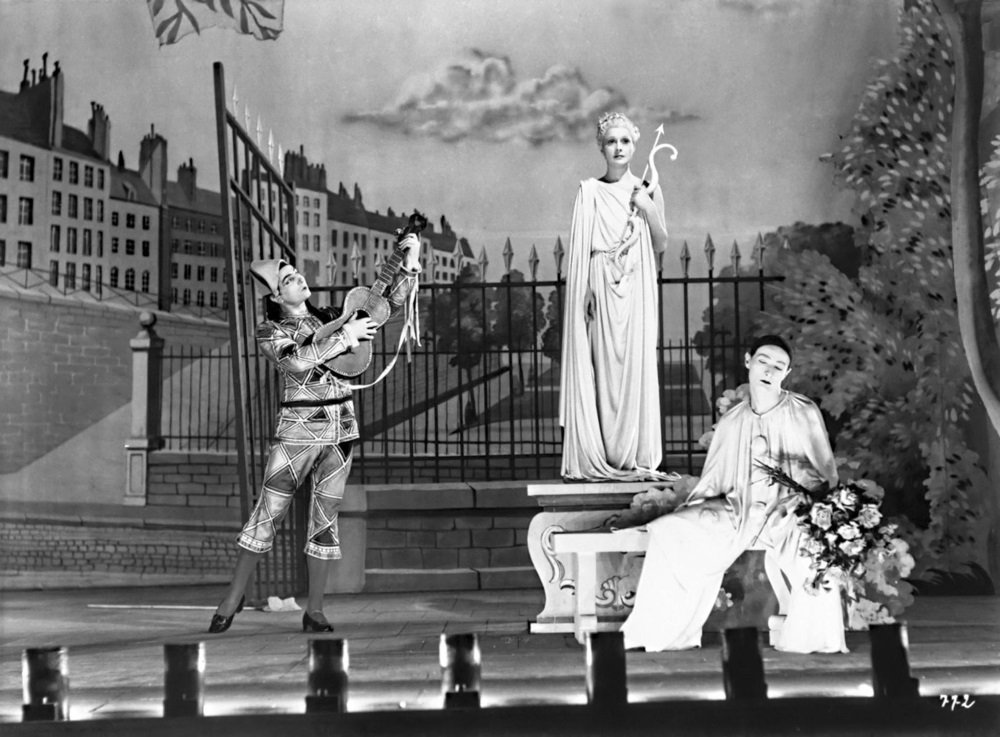 Children of Paradise (France, 1945), Marcel Carné’s legendary drama of love, theater, and crime in 19th Century Paris, is an epic in every sense of the word. It opens and ends on a stage curtain, which rises to reveal the Boulevard of Crime, the theater district of 1830s Paris, where street performers and pickpockets alike ply their trade amidst the buskers and food vendors and civilians who have come to be entertained. It is an exhilarating sequence, lavishly executed by Carné with a huge recreation of the Boulevard and hundreds of extras moving through it, and Carné introduces the four central characters of his drama amidst the bustle: Garance (Arletty), the beauty who has no illusions about her talent and makes no excuses for her lifestyle; Lacenaire (Marcel Herrand), the cold-blooded criminal with the flair of a poet and ambition to become a playwright; Lemaître (Pierre Brasseur), the actor whose confidence and ego is as large as his talent; and Baptiste (Jean-Louis Barrault), the street mime who, without speaking a word, serves as witness to save an innocent Garance from being arrested as a pickpocket (she, of course, refuses to name the true criminal, Lemaître).

The three men, real life characters all, are thrown together in a fictional love quadrangle with the beautiful Garance and her (fictional) patron Count (Louis Salou), each in love with her in their own, somewhat imperfect ways. Garance loves only one but lives practically. She is up front and honest, plays no games and makes no apologies for the way she lives her life and Arletty moves through the film—through her world—with a grace and assurance that commands the attention of all men.

This tragic romance is about the love of art and theater as much as human love. Forget that it is three hours long; every moment bursts with love and passion, and the amazing Boulevard du Crime recreation bustles with the activity of street performers and pickpockets, con-men and cops, prostitutes and rubberneckers. I don’t know that there is a comparable film with as many dense, full-developed, lovingly complicated characters, brought to life with such commitment by the performers. These are characters within characters, public personae adopted by artists as part of their identity. From the opening curtain, it is about the love of theater and the theater of love. As in a play, everyone make their entrances and exits with perfect timing. The script, by longtime Carné collaborator Jacques Prévert, is literate and witty, filled with delicious character contradictions and twists, and Carné plays with the theater of life throughout the film. It’s no coincidence that the dramatic revelation of a secret affair comes with the opening of curtains to reveal an intimate act to an audience.

The stage performers talk of “the gods,” which refers both to the upper balconies of the theater, the highest, farthest seats from the stage where the poorest patrons can afford seats, and to the lowly people themselves. It is these common folk that both Baptiste and Lemaît most respect, for their response is direct and pure. They crown theater stars. In many ways Children of Paradise plays to the gods.

Though today it is considered a French classic and a quintessential work of arthouse cinema, in its day it was a popular blockbuster, embraced and loved by high and low alike, and a soulful tribute to free France and the heart of art made, astoundingly, over the course of 18 months in the midst of the German occupation, and released in 1945, just two months after the Nazis were driven out. It was branded “The Gone With the Wind of France” in its American release, more for its popular success and historical subject matter and long running time (it runs over three hours and is broken into two separate parts with an intermission) than for sensibility. Children of Paradise is an epic, but it is an intimate drama set on a vast stage. It’s also love letter to the theater, to love lost, and to the panorama of 19th Century Paris.

The Criterion Channel also presents many of the supplements of their Blu-ray and DVD release, including the documentaries “Once Upon a Time: Children of Paradise” and “The Birth of Children of Paradise,” a video essay, and an introduction by Terry Gilliam.

and other services. Availability may vary by service.
Children of Paradise (The Criterion Collection) [Blu-ray]

Criterion originally released Children of Paradise on DVD in 2002 but the film received an exhaustive restoration in France in 2011 and Criterion mastered its most recent DVD edition and the Blu-ray debut from this new restoration. Also new to this edition is the 2010 documentary “Once Upon a Time: Children of Paradise” on the making of the film, the 1967 German documentary “The Birth of Children of Paradise” (which features interviews with members of the cast and crew), and a visual essay on the film’s design by film writer Paul Ryan. Carried over from the earlier release is the commentary (Brian Stonehill on Part One, Charles Affron on Part Two) and a video introduction by Terry Gilliam (“There was a time when poetry and big budgets seem to go hand in hand, and we don’t allow that anymore”). Also features a booklet with an essay by film scholar Dudley Andrew and excerpts from a 1990 interview with director Marcel Carné.