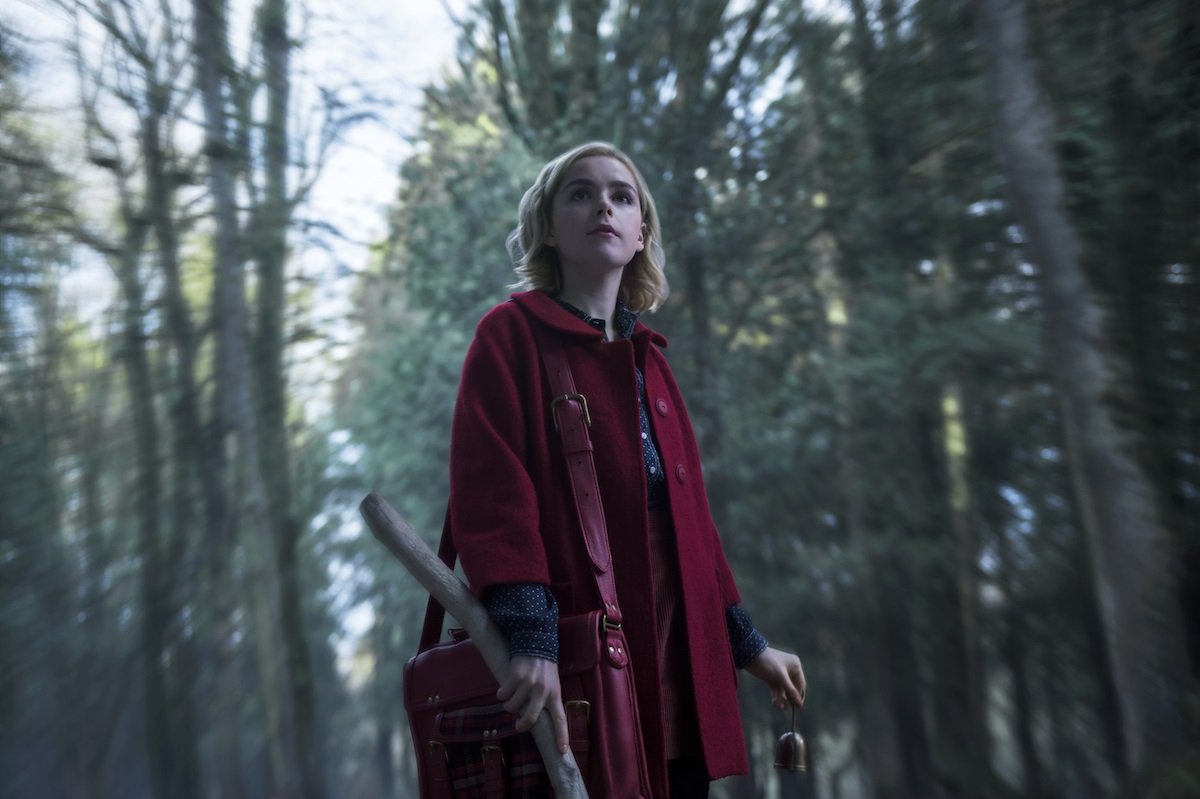 Kiernan Shipka plays a very different version of the teenage witch introduced in Chilling Adventures of Sabrina, a Netflix Original series adapted by Riverdale creator Roberto Aguirre-Sacasa from his recent comic book reboot with nods to Buffy the Vampire Slayer. A long way from the bright, goofy, family friendly sitcom of the nineties starring Melissa Joan Hart and a talking cat, this reimagining of the wholesome character has her straddling the human a world of high school melodrama and a devil worshipping coven who want her eternal soul.

“While still a teen story at heart — and one built for the masses — Roberto Aguirre-Sacasa’s take is laden with demons, trolls, warlocks, and more, all of which growl with enough menace to evoke a steady stream of shrieks,” praises IndieWire TV critic Ben Travers. “[T]he main characters are a diverse, open-minded set and their adventures often revolve around rebelling against the oppressive control of others — mainly men. This “Sabrina” not only feels like it’s made with older audiences in mind, but its characters think like grown-ups, too.”

Miranda Otto and Lucy Davis play her aunts and Richard Coyle is the head of the coven. While it’s well-timed for Halloween, it’s not for younger kids. 10 episodes now streaming on Netflix.

The hit BBC drama Bodyguard: Season 1, a veritable phenomenon in the U.K., makes its US debut on Netflix. Richard Madden (Robb Stark in Game of Thrones) stars as a war veteran now serving as a Specialist Protection Officer and Keeley Hawes as the British Home Secretary he’s assigned to protect, a ferociously ambitious politician whose hard-line policies are diametrically opposed to his beliefs.

“With Jed Mercurio’s suspenseful story and mesmerizing performances by Richard Madden and Keeley Hawes, it’s an intoxicating and addictive television cocktail,” proclaims IndieWire TV critic Hanh Nguyen. Ten minutes in, and viewers will want to binge all six hours of the new Netflix-distributed series that examines how the London corridors of power grapple with the increased threat of terrorism.

Sorry To Bother You (2018, R), the feature debut of hip-hop artist turned filmmaker Boots Riley, is a social satire as comic fantasy starring Lakeith Stanfield as a telemarketer who finds the secret to sales success and rises up the ladder of a soulless corporation. Tessa Thompson, Jermaine Fowler, Terry Crews, Danny Glover, and Armie Hammer co-star. On Cable On Demand and VOD, also on DVD and at Redbox.

Classic pick: While waiting for the next season of The Marvelous Mrs. Maisel, check out Dustin Hoffman as taboo-breaking comedian Lenny Bruce in the Oscar-nominated Lenny (1974, R) from director Bob Fosse. On Prime Video.

Foreign language pick: Cedric Klapisch’s Back to Burgundy (France, 2017, not rated, with subtitles) is a sunny drama about three siblings running their family winery over the course of a year. It makes for a lovely cinematic vacation from the increasingly gray autumn days. On Prime Video. Reviewed on Stream On Demand here.

FilmStruck subscribers received a sad E-mail this morning. After two years as the premium streaming service for classic American and foreign movies, FilmStruck announced that it is shutting down as of November 29, 2018. Annual subscribers will be given pro-rated refunds for the balance of their subscriptions. More details from Variety, which reported the news.

Mamma Mia: Here We Go Again (2018, PG-13) is both sequel and prequel to the hit musical with Amanda Seyfried and new cast members Lily James and Cher. Also on DVD and at Redbox.

Also new is A Happening of Monumental Proportions (2018, R), a comedy with Jennifer Garner, John Cho, Allison Janney, Katie Holmes, and Bradley Whitford, and the award-winning The Sun at Midnight (2016, not rated), an adventure drama from Canada filmed in the Arctic Circle.

Been So Long (2018) is a musical romance about a sensible single mother (Michaela Coel) falling for a charismatic parolee (Arinzé Kene) in the energetic nightlife of North London. The modern urban musical comes direct to Netflix from its debut at London Film Festival.

Foreign affairs: Dovlatov (Russia, 2018, not rated, with subtitles) stars Milan Marić as Russian dissident writer Sergei Dovlatov in his final days in the oppressive culture of the Soviet Union before immigrating to New York in 1971. The austere, dreamy drama from Aleksey German Jr. makes its U.S. debut on Netflix. Also new:

True stories: novelist and filmmaker Sandi Tan tells her own story in Shirkers (2018), a personal documentary about the first independent film produced in Singapore and the surprising story behind its disappearance. Arrives direct to Netflix from the film festival circuit.

David Tennant is a Bad Samaritan (2018, R) in the horror film about a dull-witted burglar who inadvertently breaks into the house of a serial killer.

Luke Treadaway stars in the inspirational drama A Street Cat Named Bob (2017, not rated), based on the best-selling book by James Bowen.

Streaming TV: before Shaun of the Dead, director Edgar Wright and actor/writer Simon Pegg collaborated with actress/writer Jessica Hynes on the hilarious and inventive BBC sitcom Spaced (1999-2000, TV-14). Amazon Prime has all 14 episodes of comedy series.

True stories: Mayor of the Sunset Strip (2004, R) chronicles the long, strange trip of Rodney Bingenheimer, the Los Angeles club owner and promoter turned trend-setting deejay who broke Oasis, No Doubt, Blur, The Strokes and Coldplay on the radio.

The documentary Stolen Daughters: Kidnapped by Boko Haram (2018, TV-14) follows the lives of a few of the Nigerian schoolgirls released after being held for three years by the violent rebel group.

Alfred Hitchcock’s Dial M for Murder (1954) is the TCM Select Pick of the Week. Grace Kelly (one of Hitchcock’s favorite actresses) stars as a blonde beauty targeted for murder by her ne’er do well husband (Ray Milland), and then framed for the killing when she turns the tables and dispatches her attacker. The murder scene, shot in tight, discomforting close-up, is the highlight of the film and Hitchcock used the then-new 3D process to explore space rather than exploit it with gimmicky effects. The 3D boom of the fifties had passed by the time the film was released, however, and it ultimately was released in the standard “flat” version that FilmStruck presents. The screen version of Frederick Knott’s stage hit suffers from a musty staginess but it’s partly overcome by Hitch’s sense of humor and playful sense of character. Robert Cummings and John Williams co-star. Streams on FilmStruck through December 27, 2018.

“Star of the Week: Melvyn Douglas” is celebrated with a collection spanning over three decades, from such Golden Age Hollywood classics as Ninotchka (1939) opposite Greta Garbo and A Woman’s Face (1941) with Joan Crawford to seventies satires The Candidate (1972, PG) with Robert Redford and Being There (1979, PG) with Peter Sellers. For something less famous, check out the sprightly comic murder mystery Fast Company (1938).

Just in time for Halloween are collections of Hammer Studios horror classics from “Director of the Week: Terence Fisher,” from lurid remakes The Curse of Frankenstein (1957) and Horror of Dracula (1958) to The Devil’s Bride (1968) with Christopher Lee in a rare heroic role, and “Japanese Horror Classics,” including the award-winning Kwaidan (Japan, 1965, with subtitles) and the surreal, fantastical House (Japan, 1977, with subtitles, not rated), plus “Cartoon Roots: Halloween Haunts” with over a dozen vintage animated shorts.

The BBC documentary Young, Gifted & Classical: The Making of a Maestro (2016, not rated) follows the journey of 17-year-old Sheku Kanneh-Mason, the first black winner of the BBC Young Musician competition.