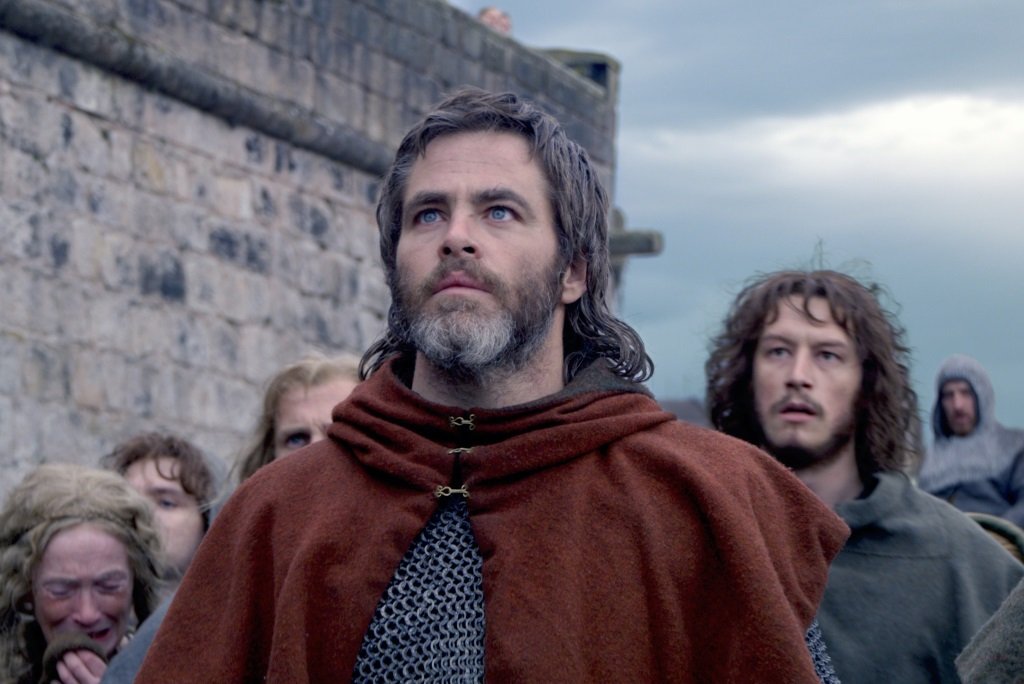 Chris Pine stars in Outlaw King (2018, R) as Robert the Bruce, the 14th century Scottish nobleman who claimed the crown of Scotland and rallied his country to battle the occupying British army of King Edward I. It’s directed by David Mackenzie, who previously collaborated with Pine on Hell or High Water, and shot entirely on location in Scotland. Aaron Taylor-Johnson and Florence Pugh co-star.

“Outlaw King tells a story that is both old and old-fashioned but does it in a decidedly modern way,” writes Kenneth Turan for Los Angeles Times, who suggests “it gives hope to moviegoers who value venerable action genres and will be pleased to see them showing signs of life.”

Manohla Dargis has a dissenting view: “At least in old Hollywood, filmmakers would also try to entertain you amid the clashes and post-combat huddles, giving you something more to watch and ponder than this movie’s oceans of mud, truckloads of guts and misty, unconsidered nationalism.”

It made its world premiere at the Toronto International Film Festival and opens in select theaters the same day it debuts on Netflix.

Pixar’s inventive superhero adventure/comedy Incredibles 2 (2018, PG) celebrates courage, family, and the challenges of raising a baby that can teleport, catch fire, and shoot lasers from his eyes with lots of zippy action and goofy gags. On Cable On Demand and VOD, also on DVD and at Redbox.

John Leguizamo’s Latin History for Morons (2018), a recording of the actor’s one-man Broadway show, distills 3,000 years of Latino history into a 95-minute comic monologue. On Netflix.

Classic pick: Sean Connery and Michael Caine are British soldiers of fortune in The Man Who Would Be King (1975, PG), John Huston’s grand adaptation of the sweeping Rudyard Kipling adventure. Reviewed on Stream on Demand here. Streaming on Amazon Prime Video.

Holiday essential: Every time you watch It’s a Wonderful Life (1946) an angel gets its wings. Prime Video also offers a colorized version but please watch it in the original black and white.

Ewan McGregor is the grown-up Christopher Robin (2018, PG) who gets a little help from Winnie the Pooh and other childhood friends. Also new:

Available same day as select theaters nationwide are romantic comedy In a Relationship (2018, not rated) with Emma Roberts and romantic drama The Delinquent Season (2017, R) with Cillian Murphy and Eva Birthistle, and Here and Now (2018, R), a drama with Sarah Jessica Parker as a singer facing a cancer diagnosis.

Ellen Page and Evan Rachel Wood go Into the Forest (2015, R) in the apocalyptic science fiction thriller and Matthew McConaughey navigates The Sea of Trees (2015, PG-13) with a Japanese man (Ken Watanabe) lost in a forest near Mt. Fuji.

Foreign affairs: extreme action film The Raid: Redemption (Thailand, 2011, R, with subtitles) earned a reputation as one of the fiercest, most brutal crime thrillers of the past decade. Reviewed on Stream On Demand here. Stephen Chow’s Shaolin Soccer (Hong Kong, 2001, PG-13, with subtitles) takes a more humorous approach to action.

Kid stuff: there are new seasons of the live-action series Treehouse Detectives and the animated shows Beat Bugs and Spirit Riding Free.

A promoter in Berlin’s techno club scene is recruited as an undercover again in Beat: Season 1 (Germany, with subtitles), a Prime Original spy thriller with a beat. Also this week is the second season of the Prime Original spy comedy Patriot.

Cult: the ingenious The Usual Suspects (1995, R) turned the crime drama inside out with inventive storytelling. Also new:

More streaming TV: The Durrells in Corfu: Season 3 continues the adventures of a British family in 1930s rural Greece.

The extremely violent Kick-Ass (2010, R) is both a comic book movie and a superhero satire starring Aaron Johnson as a high school kid whose fantasy of being a costumed crime-fighter meets the brutal reality of urban violence. Reviewed on Stream On Demand here. Prime Video and Hulu.

The British horror film Ghost Stories (2017, not rated) pays tribute to the anthology horror films of the 1970s with three tales of unexplained phenomenon. Martin Freeman stars in one segment.

Adam Pally is a former high school hotshot who returns home years later in the indie comedy Most Likely to Murder (2018, R).

Foreign affairs: Juliette Binoche stars as a free-spirited Parisian artist with bad luck with men in Let the Sunshine In (France, 2017, not rated, with subtitles), a romantic comedy from Claire Denis. Also new:

Streaming TV: Hulu is now the streaming home to the complete series of animated comedy King of the Hill created by Mike Judge and Greg Daniels and long-running sitcom Married With Children with Ed O’Neill and Katey Sagal.

The new nonfiction series Axios is a collaboration between the newly-launched news outlet and HBO.

Also new: the second season of the anthology series Room 104 and the short documentary We Are Not Done Yet (2018, not rated).

Available Saturday night is Love, Simon (2018, PG-13), a coming-of-age teenage romantic comedy and coming out story, and Paddington 2 (2017, PG), a funny and charming comic adventure for the whole family.

The Showtime Original series Shut Up and Dribble: Season 1 chronicles the modern history of the NBA and its players. New episodes arrive each Saturday.

Asa Butterfield and Alex Wolff star in the coming-of-age comic-drama The House of Tomorrow (2017, not rated) with Nick Offerman and Ellen Burstyn.

TCM Select Pick of the Week is The African Queen (1951), which stars Humphrey Bogartas a hard-drinking caption of a sputtering steam-powered boat in Africa during World War I and Katharine Hepburn as a spirited missionary who pushes him to strike back at the Germans who invaded their mission in German East Africa. It’s a classic journey adventure, with a series of obstacles that they meet with resilience and resourcefulness, but the story is how they move from “Mr. Allnut” and “Miss” to Charlie and Rosie, opposites who find strength, support and unexpected love in one another. Bogart and Hepburn stoke the fires of this unlikely romance the way only stars of that magnitude can. Huston shot the film (largely) on location in Africa and makes the location and The African Queen itself, with its big, clumsy, temperamental steam engine, essential parts of the film’s personality and texture. Reviewed on Stream On Demand here.

It’s one of 25 films in the tribute to “Star of the Week: Katharine Hepburn,” a collection that spans six decades, from her first Oscar-winning performance in Morning Glory (1933) through such essentials as Stage Door (1937) and The Philadelphia Story (1940) to her final Oscar-winning performance in On Golden Pond (1981, PG) and her last big-screen appearance in Love Affair (1994, PG-13).

“Director of the Week: Aki Kaurismaki” presents eight films from the deadpan Finnish filmmaker, from his early offbeat comedies Ariel (Finland, 1989) and Leningrad Cowboys Go America (Finland, 1989) to his more serious recent dramedies Le Havre (Finland, 2011) and The Other Side of Hope (Finland, 2017), plus five music videos. All films not rated and with subtitles.

The Simple Heist: Series 1 (Sweden, with subtitles) is a crime caper comedy about two women in their sixties who decide to rob a bank to fund their retirement. The complete six-part series streams on Acorn.

The Danish crime thriller Those Who Kill (Denmark, with subtitles) debuts with two episodes available and new episodes arriving Tuesdays.

Pingback: What to stream: Chris Pine is ‘Outlaw King’ on Netflix, ‘Incredibles 2’ and ‘BlacKkKlansman’ on VOD - Parallax View
Comments are closed.