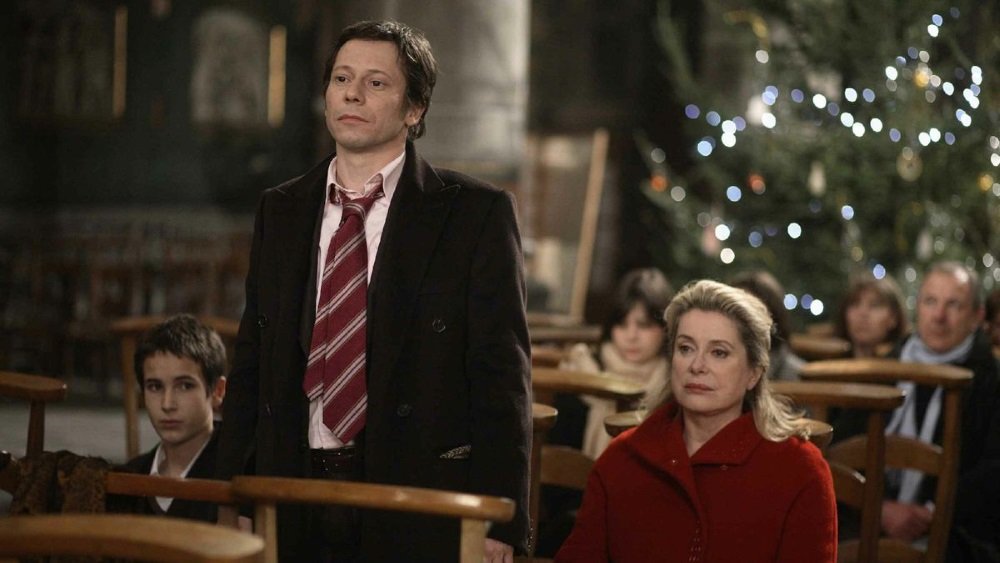 A Christmas Tale (France, 2008), Arnaud Desplechin’s mercurial, knotty and cinematically vibrant drama of family dysfunction stirred up over a Christmas gathering, was my pick for best film of 2008.

Directing with restless energy, Desplechin sketches out a family tragedy, the untimely death of a first-born that precedes the story by decades, and then only overtly references it a few times. But the shadow of that death hovers over the film: in the cancer that family matron Junon (Catherine Deneuve) has been diagnosed with, in the fragility of her teenage grandson Paul (Emile Berling), and in the odd sibling dynamics that have caused eldest daughter Elizabeth (Anne Consigny) to, in effect, legally separate herself from her brother Henri (Mathieu Amalric, in a mesmerizingly manic-depressive performance).

“Henri is the disease,” she tells us in one of the film’s direct address monologues, but perhaps the disease is in the blood: the same disease that killed Joseph at age six, the same disease that will eventually kill her mother (even with a bone marrow transplant, which will only give her a few more years; they have the mathematical formula to prove it!), and maybe the same disease that haunts her own son, Paul. For whatever reasons, Paul seeks out his outcast Uncle Henri and invites him to the family Christmas he’s been banished from for five years; this helps stir up quite a holiday nog, complete with a brutal little brawl and a bit of adultery that may come some way to smoothing over a few emotional rough patches.

Everyone in this cast is magnificent. Amalric is a hustler whose true mercenary instincts are left vaguely defined (his most callous moment belongs to Elizabeth’s flashback, her proof of his evil, but her perspective is questionable) and who is reflexively defensive in every conversation: he anticipates the worst from everyone. Melvin Poupaud is the happy-go-lucky little brother who still plays the role, affectionate and genially shallow as he skips over the tops of the churning tensions. Deneuve is chilly and aloof and confesses her dislikes more freely than she shows affection. Chiara Mastroianni is the dutiful daughter-in-law who can’t understand why Junon is so distant from her. Laurent Capelluto is the beloved cousin, just one of the boys who has a little perspective on the family because he keeps himself emotionally removed. And Emmanuelle Devos throws off sparks as Henri’s girlfriend Faunia, smiling as she mixes it up with the family, holding her own in the chaos and, apparently, enjoying every minute of it.

This is neither a farce of dysfunctional collisions nor a family drama where dredging up past sins and misunderstandings leads to teary reconciliations. It’s about the messy space inhabited by loved ones who will never know or understand everything about each other (or, for that matter, themselves) and may never overcome their own impulses (rational or irrational) and emotional reflexes. For all the prickly relations, Desplechin’s mix of joy and sadness and generosity and selfishness and forgiveness and blame is beautiful and celebratory.

Full of invention and energy, rich with suggestive details, brimming with evocative and playful technique woven into a dynamic piece of storytelling, it can seem oblique and messy. Entire histories can be suggested in a glance and a reaction and the viewer is left to fill in the rest. Yet for all the creative sprawl and seemingly inexplicable jags of human behavior, there is a magnificence to the design and the journey. A Christmas Tale is dense, creative and cinematically thrilling film, a film that pulses with human life in all its terrible and beautiful irrationality.

Not rated. In French with English subtitles.

The Criterion Channel presents the two interview featurettes from the Criterion disc release (explored below) and two trailers.

and other services. Availability may vary by service.
A Christmas Tale [DVD]

The two-disc DVD and single-disc Blu-ray releases both feature the very personal 2007 documentary “L’aimée,” a 65-minute film he made upon the sale of the family home in Roubaix (where A Christmas Tale is set) that turns into a tour through his unexplored (and never talked about) family history, and “Arnaud’s Tale,” a 35-minute featurette with new interviews with director Arnaud Desplechin and actors Mathieu Amalric and Catherine Deneuve (all in English). The nicely-shaped piece explores the origins of the film but is most illuminating when it comes to Desplechin’s creative approach and working methods. Also features French and American trailers and a booklet with an essay by Phillip Lopate.