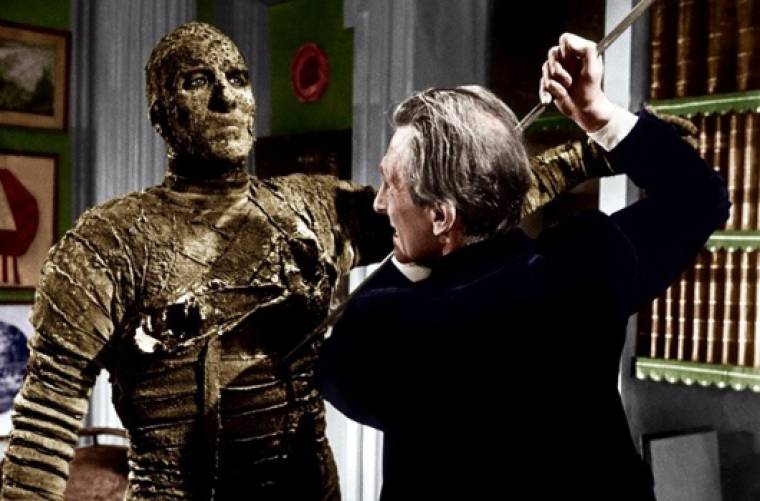 Hammer Films’ greatest nemeses, Peter Cushing and Christopher Lee, once again square off in The Mummy (1959), the studio’s reworking of Universal’s The Mummy (with elements of The Mummy’s Tomb and The Mummy’s Ghost thrown in for good measure).

Cushing stars as archaeologist John Banning, whose dig for a lost tomb results in untold treasures but leaves his father a mumbling madman and marks the rest of the company for death. Lee is Kharis, a former high priest turned gauze-wrapped guardian of the tomb, a veritable Golem sent on a mission of vengeance by Mehemet Bey (George Pastell), a disciple of the ancient Egyptian god Osiris. The scenes at the archaeological dig and the flashbacks to the ancient burial are stagebound and frankly cheap looking, but Terence Fisher is back in familiar territory when the action relocates to the misty swamps and Victorian mansions of rural England.

The towering, 6 foot 3 inch Lee makes the most terrifying mummy to date. He covers ground in giant strides, smashes his way into rooms with heavy Frankenstein-like swipes of his arm, and takes shotgun blasts with barely a twitch, yet melts from rage to calm at the sight of Banning’s wife Isobel (Yvonne Furneaux), a dead ringer for his dead Queen. The film is still most famous for its tongue removal scene, discreetly hidden from the camera but still shiver inducing.

, iTunes, GooglePlay and/or other services. Availability may vary by service.
The Mummy (1959) [Blu-ray]