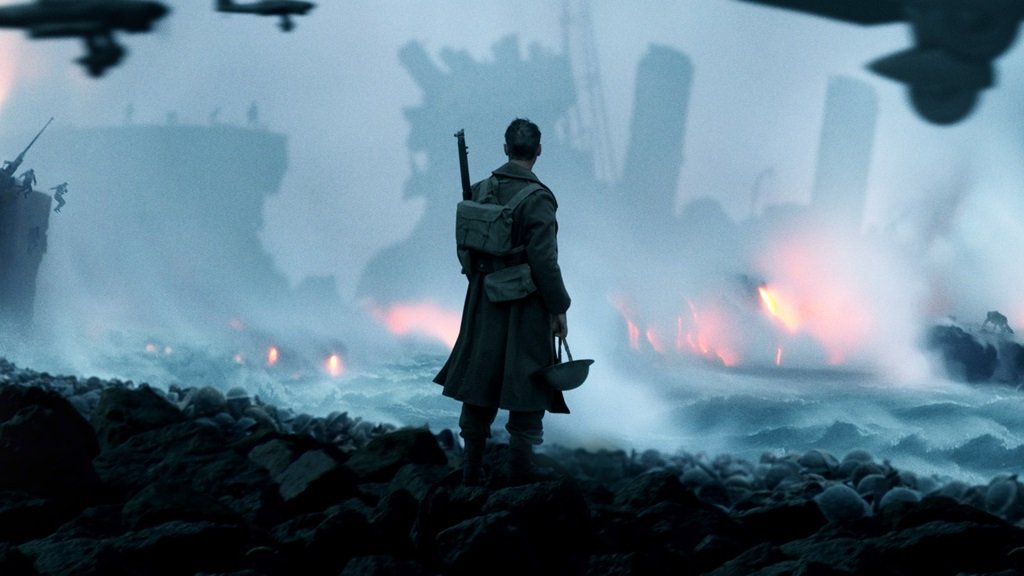 Filmmaker Christopher Nolan called in his favors from Warner Bros., where made the hit Batman / Dark Knight trilogy as well as Inception and Interstellar, to make Dunkirk (2017), a big-budget World War II drama that would never have been financed on the scale Nolan envisioned without his clout behind it. Warner may have been prepared to lose money on the picture to keep Nolan in the family but it was a hit, thanks in part to Nolan’s focus on the experience of the men in combat and the civilians who helped with the evacuation of Dunkirk.

This isn’t a tradition platoon movie or rescue drama, and we don’t really have characters to attach ourselves to. What we get are figures in action: a young soldier (Fionn Whitehead) who escapes the advancing German army to the beach; a middle-class British man (Mark Rylance) who pilots the family launch across the Channel out of a sense of duty; a fighter pilot (Tom Hardy) sent to take on the Stukas strafing the stranded soldiers on the beach. Nolan moves us from the epic to the intimate, giving us a sense of the scope of this event and then diving into the sensory experience of our dramatic representatives.

This is focused on the experiences of the men who are mobilized: the panic and resourcefulness of the young soldier trying to get off the beach and survive the assault; the quietly resolute and understanding old man taking his cruiser to rescue British boys; the cool command of the pilot who calmly gives orders in battle and, without saying a world, accepts the reality that he does not have the fuel to return to base and redefines his battle plan accordingly. Kenneth Branagh is the commander who provides the little exposition we get and he frankly he sticks out like a narrative contrivance. Otherwise it’s all of the moment, without reflection on their past lives or future aspirations. While that’s Nolan’s intention, it denies us an emotional connection to the characters. With one notable exception. Rylance is devastatingly understated as the father driven to save the sons of his neighbors because he’s lost his own son to war. His patience with a shell-shocked sailor (Cillian Murphy) he rescues from a sinking ship is one of the most moving moments on screen all year.

But Nolan being Nolan, he also tosses in a temporal twist in the telling, weaving experiences that span a week, a day, and an hour into the same fabric, finally meeting as they cross paths in the waters of Dunkirk. Hint: the clues are in the cryptic introductory titles: “The Mole – One Week” (the mole is the long jetty into the deep water), “The Sea – One Day,” and “The Air – One Hour.” Hans Zimmer’s score is one continuous piece, often driven by a ticking clock or percussion that taps out the tick-tock of time passing to enhance the urgency of the situation.

It adds to the terrible, beautiful flow of the film, which (at 106 minutes) is the shortest that Nolan is made in almost 20 years. It might seem counterintuitive to compress the scope of such ambition into such a short running time, but it serves the impressionistic intensity of the film. You emerge breathless, but never rushed.

It won three Academy Awards in the sound and film editing categories and earned nominations for best picture and director (among others).

Rated PG. It’s intense and immersive but not explicit.

, iTunes, GooglePlay and/or other services. Availability may vary by service.
Dunkirk [Blu-ray]

Also on DVD and Blu-ray from Warner Bros. Home Video in a beautifully-mastered presentation. Nolan shot on large gauge film, 65mm and IMAX, and eschewed digital effects for the real thing in most scenes: those planes are actually in the sky, the men on the beach, the ships in the water. The Blu-ray gives you that detail lost in streaming or VOD presentations.

All disc editions feature a bonus disc with a 109-minute documentary that explores the creation of the film from inception to release. Nolan is clearly proud of his achievement and is there for the entire production along with his key collaborators. In addition to the behind-the-scenes footage and interviews with actors and filmmakers are interview clips with survivors of Dunkirk evacuation, who the filmmakers talked with in preparation for the film. The Blu-ray edition also features bonus DVD and Ultraviolet Digital HD copies of the film and the 4K Ultra HD edition features bonus Blu-ray and Ultraviolet Digital HD copies of the film.