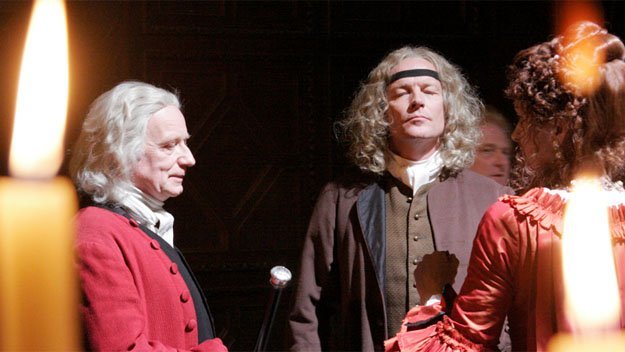 More evidence to support the proposition that truth is stranger (and more interesting) than fiction: after a successful career as one of the most influential novelists of his day, author Henry Fielding was appointed London’s Chief Magistrate and, with his younger half-brother John, created London’s first police force, the Bow Street Runners, in 1749.

Why is this bit of trivia of note? Because it’s the inspiration for the ingenious (and sadly short-lived) British TV series City of Vice (2008) starring Ian McDiarmid (the Emperor in the Star Wars films) as Henry and Iain Glen (Jorah Mormont in Game of Thrones) as John, his blind brother and partner in law enforcement (he can recognize over 3,000 known criminals by voice alone). They launch their new police force with an underfunded budget and six loyal constables. “It wasn’t enough, but it was a start.”

This is an overcrowded London of impoverished masses, where the crime is rampant and corruption the order of the day (“The only thing that can be said to be organized is crime,” remarks Henry), and where upholding the law isn’t always the same as seeing justice done. The series does wonders in suggesting the period on a budget, and its sensibility is a near perfect balance of modern perspectives and period sensibilities, a mix of the rarified and the raw, in both language and subject matter. Even the forward-thinking Henry, at home in a world of prostitutes and pimps, cutthroats and kidnappers, is less than charitable when confronted with the “sin of buggery.”

The five episodes of the first season are all that were produced; sadly the series was not picked up. And that’s too bad because it is fascinating and a lot darker (visually as well as thematically) than you might expect.

, iTunes, GooglePlay and/or other services. Availability may vary by service.
City of Vice [DVD]