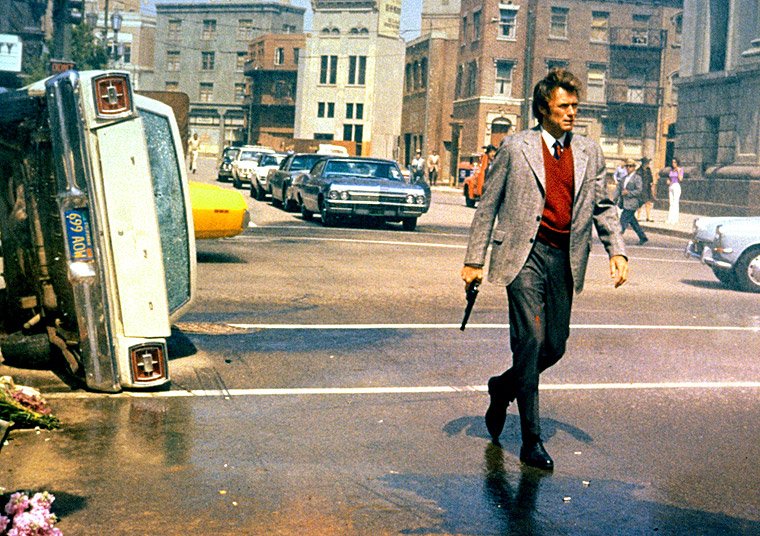 “I know what you’re thinking. Did he fire six shots, or only five?”

Clint Eastwood was a western icon for the fistful of spaghetti westerns and cynical American copycats. When he strapped on his .44 Magnum to stride the streets of San Francisco as Inspector Harry Callahan, known to the squad as “Dirty Harry,” Eastwood turned his frontier persona into an urban cowboy on the mean streets of our urban world.

He didn’t get his nickname for hygienic reasons. Everyone offers their own explanation. His partners have a habit of landing in the hospital or in the morgue. He’s been known to bend the law in the pursuit of justice. He’s an equal opportunity bigot.

Harry has the best explanation: “Every dirty job that comes along.”

In Dirty Harry (1971), Callahan tracks a psychopath with sniper rifle trying to extort the city for a small fortune (at least by 1971 standards). The killer signs his ransom demands “Scorpio,” a not-so-veiled reference to the Zodiac killer who terrorized the San Francisco Bay area for years. The real-life serial killer eluded capture, but on the big screen we get a pure law-and-order fantasy and closure from the end of a barrel.

Harry was made to order for a white, middle class audience nervous about escalating urban violence in the seventies, the go-it-alone John Wayne cowboy for the modern era. Despite comments about his “long hair” from his fellow cops, he’s square as they come. And as ornery.

For me, director Don Siegel turns Harry into the kind of moral conundrum that makes movies interesting: sexist, blithely bigoted, unconcerned with such details as civil rights, impatient with those pesky bureaucrats that hinder his efforts with laws and orders, but resolute in his mission. In real life he would be up on charges, and justifiably so. In the movies he’s just the kind of cowboy these mean streets call for.

Andy Robinson is the psychopath with a personal vendetta against Harry, Harry Guardino plays Harry’s exasperated boss, Reni Santoni his reluctant new partner, and John Vernon is the Mayor faced with a public relations nightmare every time Harry practices his kind of street justice.

Harry finally turns his back on it all in disgust but Eastwood returned as Harry Callahan in four sequels: Magnum Force (1973), scripted by John Milius and Michael Cimino; The Enforcer (1976) with Tyne Daly, Sudden Impact (1983), directed by Eastwood himself, and The Dead Pool (1988) with Patricia Clarkson, Liam Neeson and Jim Carrey.

The Blu-ray and DVD releases from Warner Bros. Home Video feature commentary by Eastwood biographer Richard Schickel, the 1993 documentary “The Man From Malpaso,” a sociological/cultural overview of the character, and additional featurettes and interviews. Also available in a box set with the four sequels.