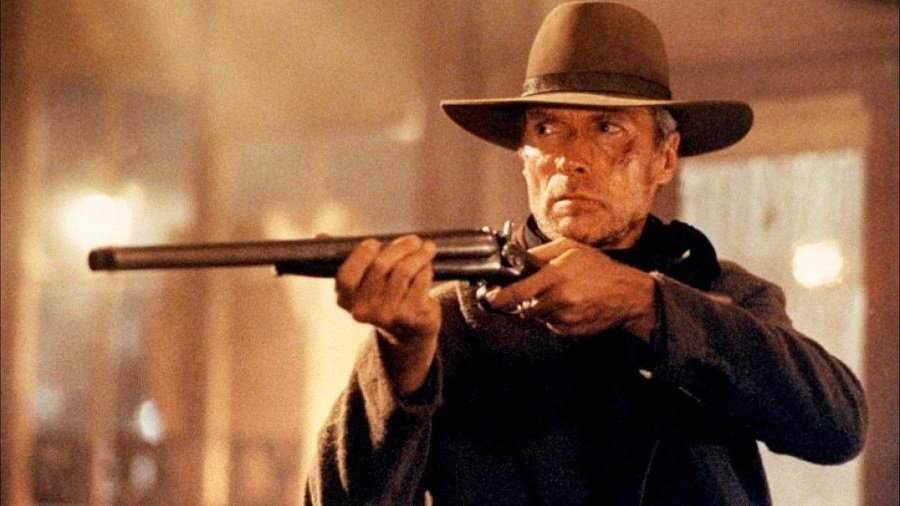 “I don’t deserve this, to die like this. I was building a house.”
“Deserve’s got nothing to do with it.”

Clint Eastwood’s 1992 western Unforgiven earned the director his first Oscars, for Best Picture and Best Director. In a way, it finally made official what critics and fans had slowly come to realize over the last decade (and at least since his 1988 Bird): Clint Eastwood—legendary as both the iconic western drifter with no name and Dirty Harry—was one of America’s best directors. He had directed 15 features before Unforgiven and has made even more since, but Unforgiven is still the film that defines Eastwood the director for most audiences.

Aged and sunbaked into a leathery hardness, he plays a former gunfighter roused from his retirement (he’s a widower, single father, and floundering farmer) for one last bounty, and Morgan Freeman (in his first appearance in an Eastwood film) is his old friend and former partner invited along for a piece of the bounty. Eastwood also directed Gene Hackman to an Oscar as the seemingly affable sheriff, a pragmatist who measures justice in terms of expediency, and gave Richard Harris the equivalent of a spotlight solo in a small role as a flamboyant British gunslinger managing his own legend through pulp stories.

, iTunes, GooglePlay and/or other services. Availability may vary by service.
Unforgiven [DVD]