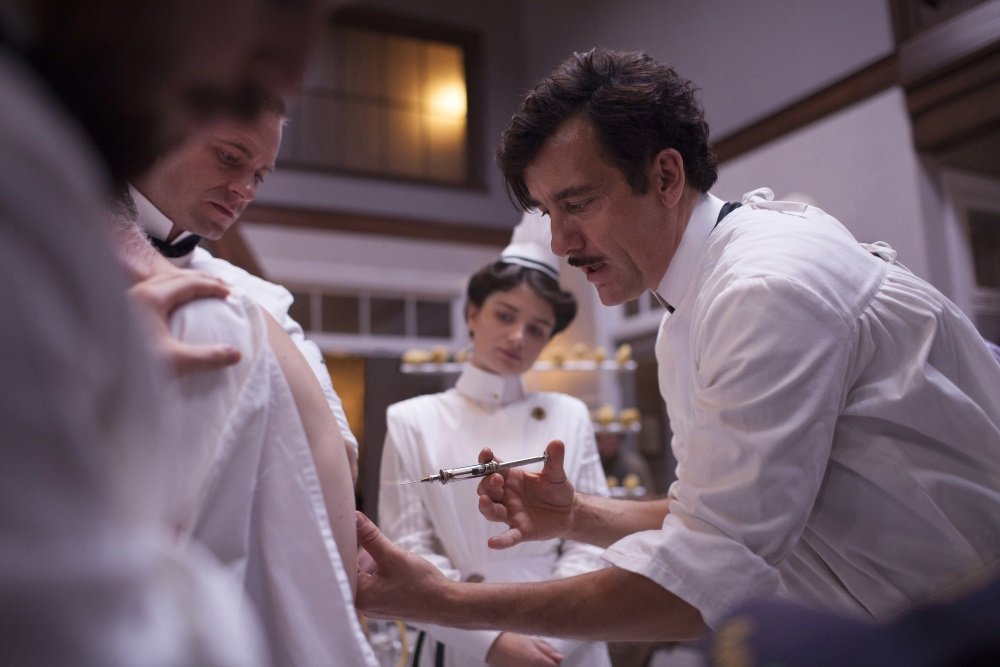 The Knick (2014-2015), a medical drama period piece set at a struggling hospital in 1900 New York City, is the project to which Steven Soderbergh committed himself after he announced his retirement from filmmaking. So instead of directing a film, he directed all twenty episodes of the two seasons of this original series.

Clive Owen stars as Dr. John W. Thackery, a brilliant, unconventional surgeon who takes over as head of New York’s Knickerbocker Hospital (aka The Knick). He’s a forward-thinking surgeon on the frontier of the science of medicine in a financially-struggling institution in a poor part of the city, devoted to his work and to the advancement of surgical techniques with a passion unequalled in the city. He’s also a cocaine addict and a frequent flier at the local opium den: the former to keep him going for hours on end, the latter to bring him back down.

The series, a medical drama period piece created by Jack Amiel and Michael Begler (they script most of the episodes themselves), is set in an appropriately combustible period. Medicine is progressing a rapid pace and Thackery wants to be part of the vanguard—there’s some ego involved but he is truly driven to advance surgery—but the city is very much back in the 19th century of graft and prejudice and class division (which makes a cholera outbreak among the city aristocrats a strangely satisfying twist).

This is a city of immigrants and social hierarchy and open bigotry. The talented African-American Dr. Algernon Edwards (André Holland) arrives from training with Europe’s finest only to be shunned by the white establishment despite a talent and drive second only to Thackery. The tough, tart-tongued Sister Harriet (Cara Seymour) running the hospital orphanage has a sideline performing illegal abortions for the most benevolent of reasons (she’s seen enough unwanted children). The ambulance drivers compete for accident victims and claim a bounty for each one they bring to their institutions.

The second season has more of a soap opera quality than the first, building big, melodramatic storylines and making Thackery even more out of control, but it continues to tackle racism, sexism, and class prejudice, the rampant corruption in politics and big business, and the hypocrisy of rich and powerful men, Owen is intense and compelling as Thackery, a maverick, drug-addicted doctor driven to find new treatments for disease and injury, and Holland’s Dr. Edwards turns out to be the most qualified surgeon to take over as head of surgery, much to the rancor of the bigoted Dr. Everett Gallinger (Eric Johnson), Thackery’s arrogant but less talented protégé, and the board of directors, which wants a white doctor in charge. It also develops the relationship between Sister Harriet and Tom Cleary, the gruff ambulance driver and working class entrepreneur who becomes her protector and partner in a new business: selling contraceptives to hookers and clients alike. Which, it turns out, is illegal.

Steven Soderbergh directs all twenty episodes of the two seasons and is also the cinematographer and editor (under the names Peter Andrews and Mary Ann Bernard, respectively). He shoots it all with an unshowy handheld camera, which gives it a classical, cinematic look that is just a little nervous and unsteady. He’s always there in the moment and responsive to the energy and tension of the scene, and at key moments his cool observational style becomes aggressive and startling. The period details are rich without becoming distracting and the melodramatic twists and dark sides of the characters (like a hospital administrator striking side deals to pay off a debt and hide his financial malfeasance) makes sure that the criminal element has plenty of play in the show.

It’s a vibrant, violent, racy series and an intelligent show with complicated characters, rich period details, and a compelling mix of history and fiction. Soderbergh’s focus keeps the more flamboyant elements to the service of the story and characters.

Cinemax has been the red-headed stepchild of the pay cable networks for years, specializing in action, horror, and late-night softcore programming. This series was their first stab at the kind of ambitious and challenging programming that HBO and Showtime have been making for years and it earned Cinemax nine Emmy Award nominations and a win for its production design.

Also costars Jeremy Bobb, Juliet Rylance, Eve Hewson, and Michael Angarano as the most sweet-natured doctor in the city.

Each season features 10 episodes on Blu-ray and DVD with “Episode Post-Ops” for each episode (brief pieces with the cast and crew that followed the episodes on Cinemax), multiple commentary tracks, and numerous short behind-the-scenes featurettes.