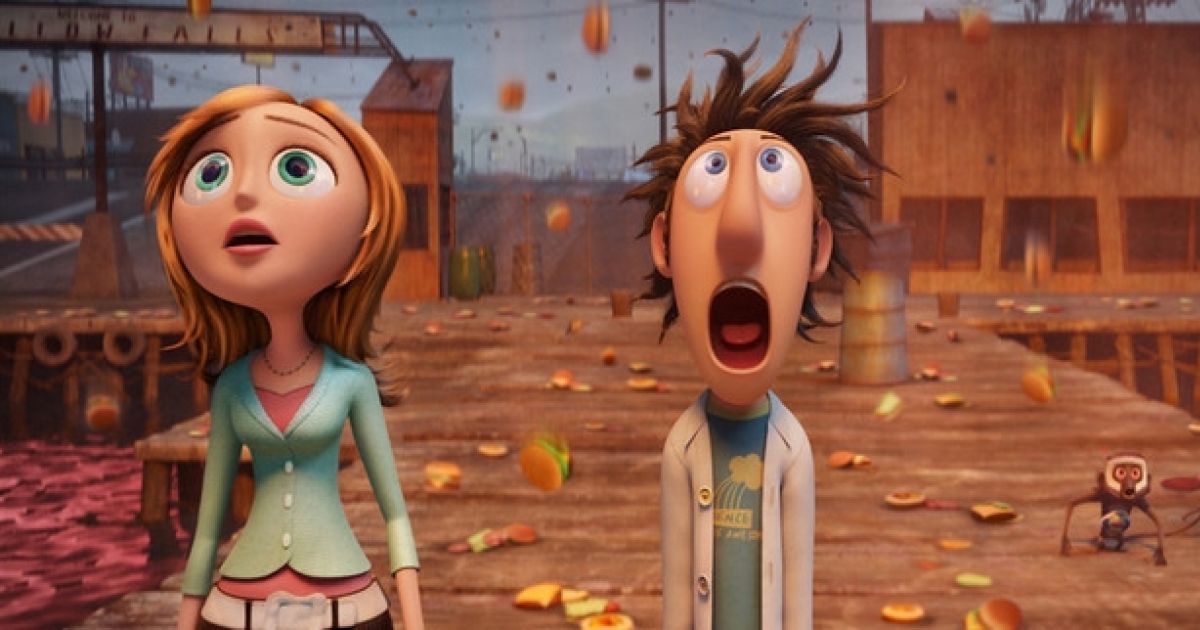 A town gets a buffet line for a weather system in Cloudy With a Chance of Meatballs (2009), a colorful animated feature based on a children’s storybook tale.

Director/writer team Phil Lord and Chris Miller cobble a story around the storybook’s premise but it’s the whimsical imagery of raining hamburgers, a Jell-O mold castle, an ice-cream winter wonderland, and a spaghetti tornado that carries the film.

Bill Hader voices the aspiring young scientist who has turned a boyhood treehouse into a high-tech lab and embarked on imaginative inventions without really thinking the consequences through and Anna Faris is perfectly bubbly as an aspiring reporter and closet science nerd who hides her smarts behind a goofy sweetness. Mr. T provides heart and humor as the overzealous town policeman while James Caan is dream casting, providing an understated tough-but-tender gruffness as the hero’s dad, a bait-and-tackle shop owner who speaks in fishing metaphors.

It’s the first feature from filmmaking team Lord and Miller. They went on the make 21 Jump Street and its sequel and the animated The Lego Movie.

, iTunes, GooglePlay, Fandango, Vudu and/or other services. Availability may vary by service.
Cloudy with a Chance of Meatballs [Blu-ray]

Cloudy with a Chance of Meatballs [DVD]

The single-disc DVD includes director’s commentary joined by actor Bill Hader. The two-disc edition adds a lot of supplements, including a couple of fun making-of featurettes hosted by the filmmakers (who appropriately describe making a film like making a hamburger) and a series of “Progression Reels,” which illustrate in simple yet direct terms how the animated image is constructed and layered, among other supplements. The Blu-ray features a bonus DVD copy (for the kids room, of course) and the goofy exclusive “Splat Mode” mode (for a virtual food fight).