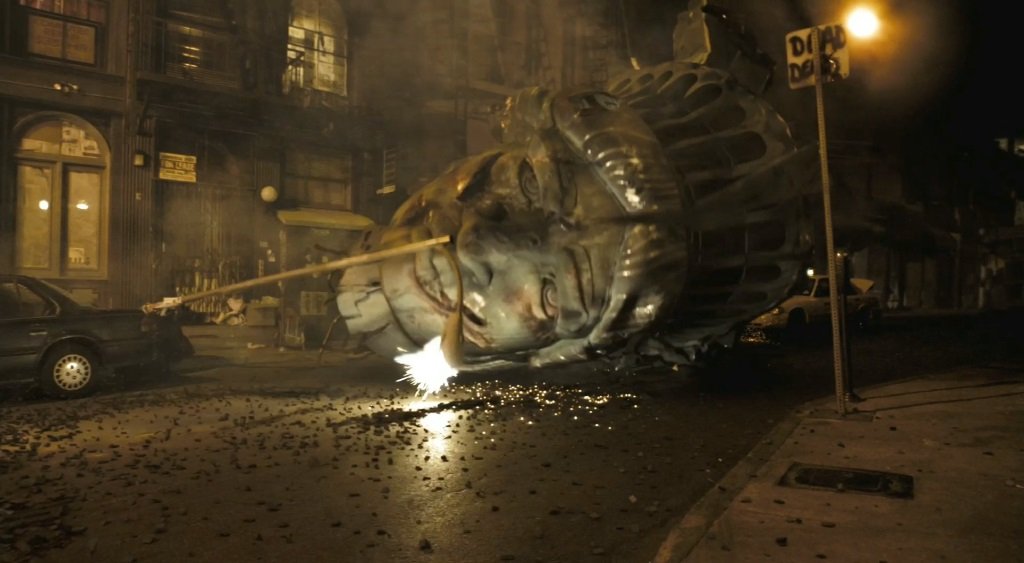 A 21st century Godzilla movie for the (pre-video phone) camcorder generation, Cloverfield (2008) is a high-concept reworking of an old-fashioned creature feature with a DIY aesthetic.

The conceit of the film is essentially the home video record of an alien invasion as shot by a wise-cracking default cameraman recording every movement of a group of twenty-something friends and lovers (among them Lizzy Caplan, T.J. Miller, Mike Vogel, and Odette Yustman, now known as Odette Annable, before they were known) on the run for their lives as a giant rampaging lizard rampages through New York and tears down the Manhattan skyline. The creature also sheds skittery little creatures, lizardy-spider things that crawl the walls and streets and pounce on humans like a feral rear guard mopping up in the wake of the super-weapon monster.

It’s a next-generation Blair Witch Project premise, a clever idea that turns into a cynical commentary on a solipsistic generation more concerned with documenting their experience than actually accomplishing something.

Director Matt Reeves and screenwriter Drew Goddard have plenty of tricks up their sleeves (among them the head of the Statue of Liberty knocked into the street by a meteor mortar) and keep the monster to stolen glimpses until the finale. The DIY aesthetic allows the groovy effects made to look tossed off, while storytelling cleverness helps distract from the rather sloppy plotting: it’s all clever flourishes with few story smarts.

Give it credit for giving the same old monster movie the feel and texture of something new. And it is refreshingly short: 73 minutes of movie with another 12 minutes of credits.

A collection of loosely-connected sequels, all produced by J.J. Abrams and set in the same universe but otherwise distinct, separate stories, have been rolling out over the years, including the excellent 10 Cloverfield Lane.

, iTunes, GooglePlay and/or other services. Availability may vary by service.
Cloverfield [Blu-ray]

Director Matt Reeves provide gives deep background on every aspect of production – from finding the style and creating the aesthetic on set and behind the camera to editing, special effects, and the rest of the package – in a commentary track that he delivers with almost breathless energy. The project was kept under tight wraps throughout the shooting but was well-documented internally along the way, as all the behind-the-scenes footage in the 28-minute “Document 01-18-08: The Making of Cloverfield” and the 22-minute “Cloverfield Visual Effects” show. Also features four deleted scenes and two alternate endings (with optional commentary by Reeves), a gag reel and a featurette on the creature creation. There are ostensibly a bunch of Easter Eggs hidden throughout the disc, but I didn’t find them.