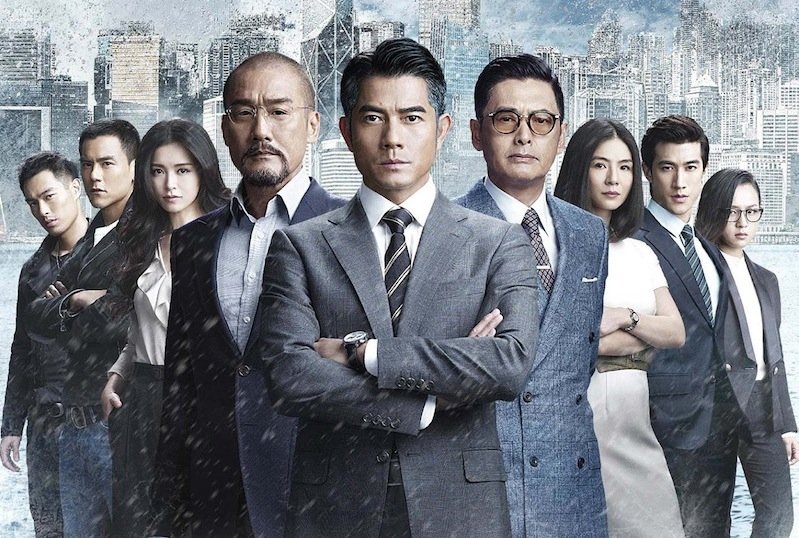 Cold War 2 (Hong Kong, 2016) is an odd—and oddly entertaining—type of cop thriller: interdepartmental power play directed like an action film. Aaron Kwok stars as the newly-appointed Police Commissioner Sean Lau and Tony Leung Ka Fai is M.B. Waise Lee, his rival for the position in the first film and now on a retirement track. It picks up where the first Cold War (2013) war left off. Waise’s son Joe (Eddie Peng), a decorated cop, turned out to be a mole working with a criminal organization behind the kidnapping of five police officers. Now Joe is back in play when Lau’s wife is kidnapped and the ransom is his release. Lau breaks every protocol to get her back, which puts him under investigation and Waise back in consideration for his job. And that’s just the beginning of a conspiracy thriller and crime caper that plays out in the streets (there’s a savage shoot-out in a car tunnel), the government (which side are you on?), and the courts (where Chow Yun-Fat’s legal team tries to understand the whole assault on the police).

Even if you’ve seen the original there’s a lot to catch up on; there are dozens of characters called out in the first ten minutes and the complications can be hard to track. The threat feels a little abstract at times and the characters have little dimension (most of it provided by the commitment of the actors) but filmmaking team Lok Man Leung and Kim-Ching Luk know how to stage an impressive action scene and even how to make a boardroom discussion have a sense of urgency. It’s a slick piece of filmmaking that moves at a terrific pace. It simply isn’t particularly involving.

, iTunes, GooglePlay and other services. Availability may vary by service.
Cold War 2 [Blu-ray]

The Blu-ray and DVD from Well Go offers Cantonese and Mandarin soundtracks in dts-HD 5.1 and English and Chinese subtitles. The four featurettes are all short promo pieces with snippets of cast and filmmaker interviews and behind-the-scenes clips.