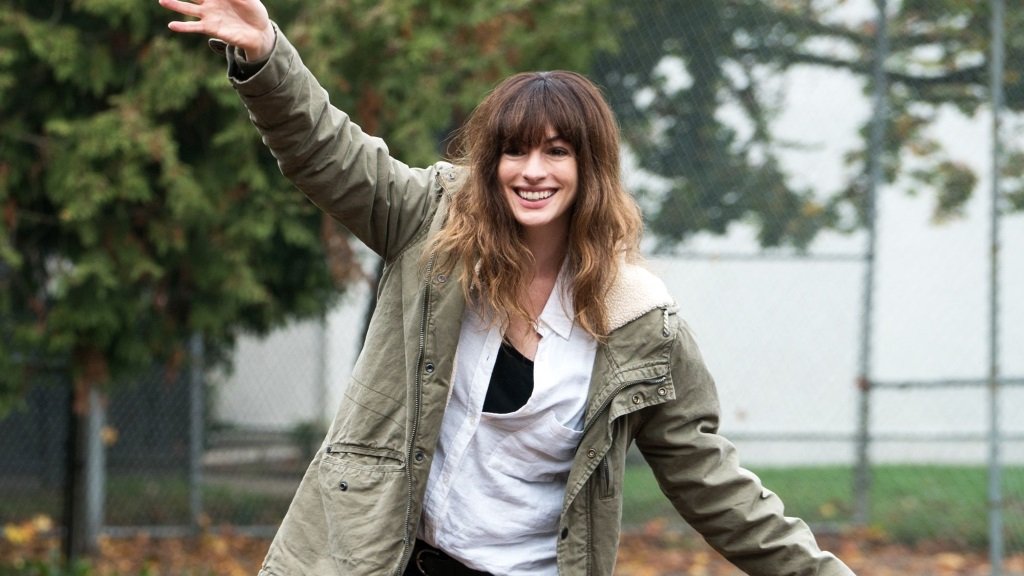 Colossal (2017) is the oddest and most inventive film to come out of the new wave of giant monster movies.

It stars Anne Hathaway as Gloria, an out-of-work writer turned reckless party girl and black-out drunk who is kicked out of the Manhattan apartment she shares with her exasperated boyfriend (Dan Stevens) and returns to her dreary hometown and moves into her empty, abandoned family home. She runs into her childhood best friend Oscar (Jason Sudeikis), pretty much the only pal from her generation left in town, and gets a job waitressing in the sleepy bar he inherited. Unanchored and lacking any plan, goal, or motivation of any kind, she continues drinking her nights away with this new crew until she wakes up one morning (after another alcohol-fueled blackout) to find out that a towering Godzilla cousin has stormed Seoul, South Korea. As it continues to appear every morning (American time) at the same time, she discovers that she has a connection to the creature, one that goes back decades.

Let’s leave it at that; discovering the twists is part of the fun of the film. If you’ve seen the trailer, you’ve seen one already, but that only scratches the surface. What first seems to be a cosmic comic lark, a goofy twist on the monster movie, gets dark in a very human way without losing the film’s creative charge or director Nacho Vigalondo’s sense of humor and poetic justice. Spanish filmmaker Vigalondo has a talent for genre mash-ups, creating fresh takes on familiar science-fiction tropes, and this film (his English language debut) is his smartest, edgiest, and most accomplished to date.

Hathaway plays against her image as the likable but unreliable and unraveled Gloria, as does Sudeikis, whose easygoing manner and generosity covers up a damaged soul. She’s a mess but he’s an even bigger one and there’s nothing cute about. Tim Blake Nelson and Austin Stowell co-star Oscar’s reliable barflies and after-hours drinking buddies.

The giant monster scenes owe more the Japanese daikaiju than the largely humorless American adaptations and Vigalondo revels in the mix of delight and horror of towering creatures striding between (and at times knocking down) skyscrapers and tromping crowds of panicked humans, sometimes by accident, sometimes not. What’s truly inspired is mixing the genre with the indie thirtysomething comedy of slackers in stasis and using this cocktail as a vehicle to explore alcoholism, bullying, control, and male rage. That Vigalondo, who also wrote the film, succeeds so well is impressive. That he delivers a gonzo monster movie with an offbeat sense of humor along the way makes it a small treasure.

, iTunes, GooglePlay and/or other services. Availability may vary by service.
Colossal [Blu-ray]