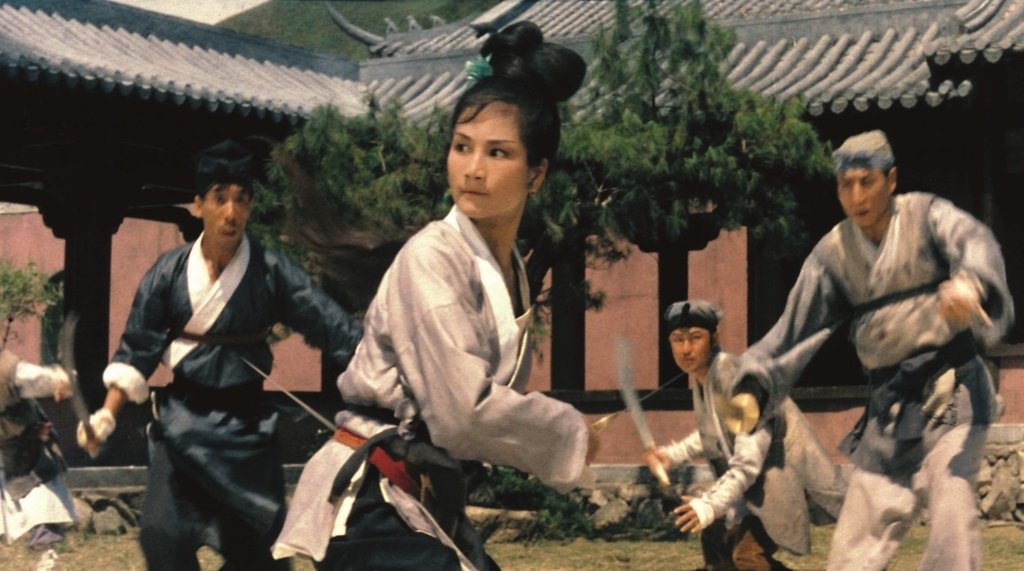 Come Drink with Me (Hong Kong, 1966) is a landmark of Hong Kong cinema and a classic of the wuxia pian (“martial chivalry” genre), a genre that director King Hu redefined with this delightfully spry mix of action, humor, and costume spectacle.

Cheng Pei-Pei stars as the pixie-ish Golden Swallow, a determined young female warrior on a mission to save her kidnapped brother. Yueh Hua is the amiable beggar Drunken Cat, the charming rogue leader of a singing brood of orphans who is secretly a martial arts master and guardian angel to the avenging Golden Swallow, his drunken front hiding his true identity. Together they take on the pale and powdered Jade-faced Tiger and his bandit army, in wild battles with magnificent action choreography and comic flourishes.

Yueh Hua makes a charming rogue with a genuine modesty and easy-going quality in contrast to the cool intensity of Cheng Pei-Pei, whose control becomes a sexy fierceness in the heat of battle. The film soars on a lyrical mix of scruffy singing heroes, cross-dressing heroines, narcissistic villains, and fantastical action choreographed like dance.

The film launched a new wave of Hong Kong filmmaking and you can feel its influence in everything from Bruce Lee’s martial arts thrillers of the 1970s to Jackie Chan’s Drunken Master films to the Tsui Hark-led new wave of high energy, special effects laden adventures in 1980s Hong Kong, and of course, the Oscar winning Crouching Tiger, Hidden Dragon, Ang Lee’s tribute the magical, colorful genre that King Hu reinvented with this film. He even cast Cheng Pei-Pei in a major role in honor of his inspiration.

King Hu, meanwhile, went on to make the wuxia pian epic A Touch of Zen, his masterpiece and one of the greatest martial chivalry films ever made.

Not rated, in Cantonese with English subtitles

, iTunes, GooglePlay and/or other services. Availability may vary by service.
Come Drink with Me [DVD]

The “Dragon Dynasty” DVD from The Weinstein Company features a detailed commentary with Hong Kong cinema expert Bey Logan and lead actress Cheng Pei-pei (who is amazed at Logan’s knowledge and fills in his gaps with her own remembrances). Bey pays tribute to the film in “A Classic Remembered: A Retrospective With Hong Kong Cinema Expert Bey Logan,” and the disc features new interview featurettes with stars Cheng Pei-Pei and Yueh Wah and a remembrance of King Hu by Hong Kong director/producer Tsui Hark.