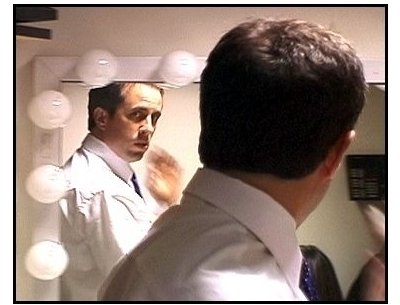 Enter the world of Jerry Seinfeld as he retires his tried and true stand-up comedy act and builds a new one from the ground up in Comedian (2002).

Shot a couple of years after Seinfeld signed off from his smash hit TV show and after putting his old stand-up material to bed after one last big comedy tour, Comedian follows Seinfeld (who also produced the film) for over a year as he works and reworks an entirely new act at comedy clubs and open mics. Director Christian Charles (who directed Seinfeld in a series of credit card commercials) picks a glib, grating, hungry young comic named Orny Adams for contrast. Full of himself and more obsessed with fame and success than the material, Charles lets him spout off about his dues while he tries to make his mark then pretty much drops him to focus on Seinfeld, who is clearly in it for the love of performing. And maybe a little to show that he can still do it. He certainly doesn’t need the money.

This is not a comedy concert film, it’s about the hard work of creating comedy, about the glare of the spotlight, about the rush of a good performance, and the heartsink of comic meltdown on stage. Watching Seinfeld lose his place and fall silent in the middle of an act is almost unbearable, yet like a car wreck you can’t help but watch with perverse fascination.

Fellow comics Colin Quinn, Chris Rock, Ray Romano, Kevin Nealon, Jay Leno, Robert Klein, and Garry Shandling, all add their insights to the philosophy of stand-up. (Note also that Bill Cosby is also on hand, framed as Seinfeld’s stand-up hero; this was long before the revelations of sexual abuse but it still may cause a little squirm.)

It pairs nicely with the 2017 Netflix stand-up special Jerry Seinfeld: Before.

Also on DVD and on SVOD through Amazon Video, iTunes, GooglePlay and/or other services. Availability may vary by service.
Comedian [DVD]

The two-disc DVD features commentary tracks (one by director Christian Charles and producer Gary Streiner, who discuss the architecture of their film, the other by Jerry Seinfeld and Colin Quinn, who apparently run out of things to say–witty or otherwise–fairly early on), deleted scenes with optional commentary, plus Jerry Seinfeld and Orny Adams interviewed by “Jiminy Glick” (Martin Short, and yes, both are upstaged by Short), “Late Night With David Letterman” appearances by Seinfeld (3/21/01) and Adams (12/13/00), and a look at the working notes of three comedians in “Anatomy of a Joke,” among the supplements.