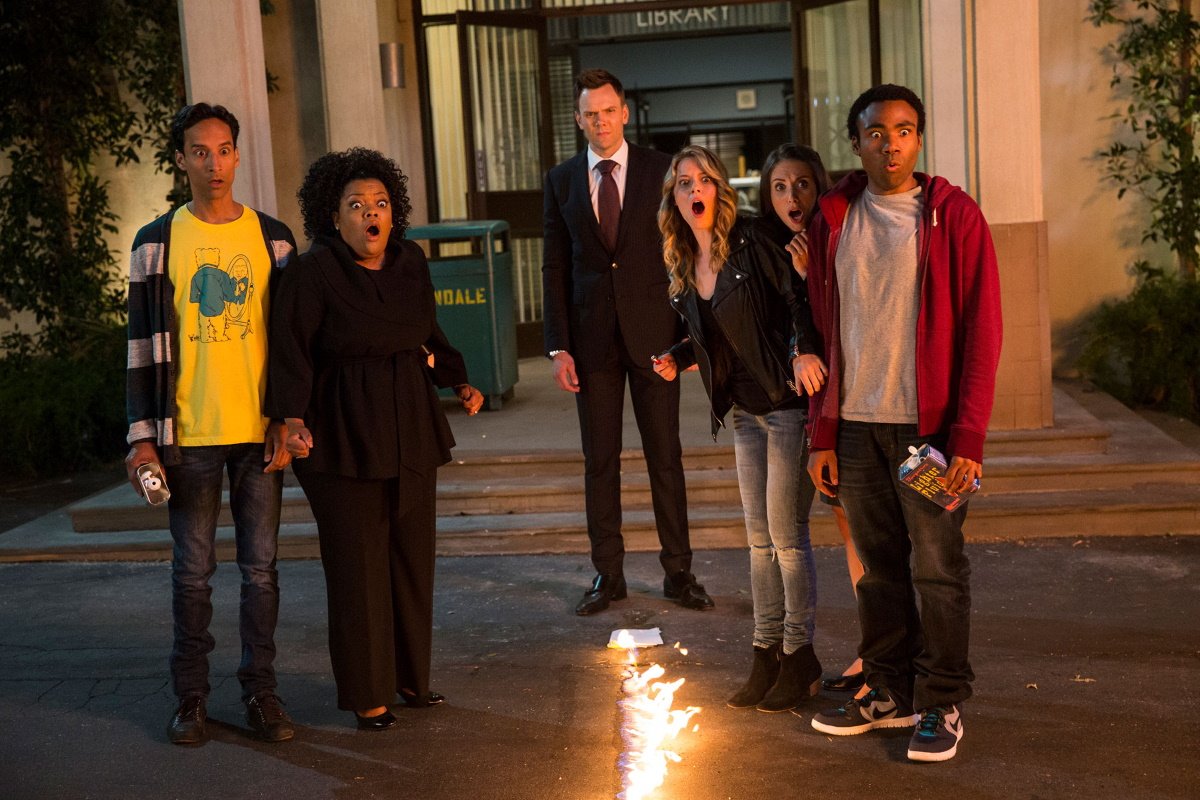 When glib, wisecracking lawyer Jeff Winger (Joel McHale) has his license to practice law suspended for lying about his college degree, he goes back to school to get his BA in the most painless, effortless, cheapest way possible: community college.

He figures he can just fake his way through but his attempts to hit on the serious campus hottie, Britta (Gillian Jacobs), inadvertently lands him in a study group with a colorful cross-section of back-to-school stereotypes: the divorced mom (Yvette Nicole Brown), the tightly-wound overachiever (Alison Brie), the intellectually-challenged jock (Donald Glover), the socially awkward nerd (Danny Pudi), and the senior citizen (Chevy Chase) who provides the insensitive racist and sexist comments. Against his better judgment, Jeff becomes the leader of this dysfunctional study group.

Community: Complete Series (2009-2015), created by Dan Harmon (Rick and Morty) with Arrested Development veterans and future Marvel Cinematic Universe architects Joe and Anthony Russo, is a skewed version of the classic college show. It’s a smart, savvy, snappy comedy on the same comic wavelength as 30 Rock, aimed at young adult sensibilities but with a mix of social satire, creatively exaggerated stereotypes and ensemble comedy that spoofs young and old alike. And it is as meta as they come, with episodes filled with some of the most inspired movie references and pop culture parodies on TV. The first season along features riffs on GoodFellas, Good Will Hunting, and a paintball apocalypse that quotes The Terminator and every zombie movie ever made.

The show’s cast is completed with Jim Rash as the cross-dressing Dean Pelton, who nurses a very obvious crush in Jeff, and Ken Jeong as the borderline sociopathic Ben Chang, a Spanish teacher whose grasp of the language is tenuous at best. John Oliver has a recurring role as a psychology professor, and

Season Two opens with the group taking Anthropology from a slightly unhinged new professor (Betty White) and Chang, since kicked off the faculty, now a student desperate to get into the group. The season includes a zombie Halloween, the last temptation of Abed, the greatest blanket fort in the history of the world, a stop-motion Christmas special, Abed’s dinner with Pulp Fiction, and an epic two-part finale, “A Fistful of Paintballs” and “For a Few Paintballs More,” that pays tribute to spaghetti westerns and features Josh Holloway as a rogue gunman. Pop pop! The animated holiday episode, Abed’s Uncontrollable Christmas, earned an Emmy for its animation, sadly the show’s only win during it six-year run.

By Season Three, what began as an ensemble piece centered around Joel McHale’s Jeff has shifted to the brilliant rapport between best friends and roommates Troy and Abed, two guys living in their own fantasy world of role-playing and pop-culture immersion, and their dynamic springboards the season’s most famous story: the two-part Pillows and Blankets, a college-wide pillow fight civil war directed as a Ken Burns documentary (complete with narration by Keith David). The show also lays waste to Glee, Doctor Who, Law and Order (complete with chung-chung), the holodeck of Star Trek: The Next Generation.

The fringe members also get their time in the spotlight. Jim Rash’s cross-dressing Dean Pelton, who graces most episodes with an impromptu fashion show, is promoted to the opening credits, and Ken Jeong’s Senor Chang stages a coup with his band of adolescent blackshirts. Michael K. Williams has a recurring role as new professor who clashes with Jeff and guest star John Goodman plays a devil of sorts competing for the hyper-cooled soul of born air conditioning repairman Troy. But it’s the chemistry and interaction that makes the show hum. It’s not just that they all get a spotlight, it’s that they interact like a jazz ensemble, with comments flying and responses ricocheting through every study meeting like a mad bop tune.

It was high point of the show. Creator/producer Dan Harmon was let go by the network and Anthony and Joe Russo, who directed many of show’s top episodes, left with him. His absence is noticeable in the shifts in tone and character of the first half of the short season, and even in the stronger second half as the new showrunners managed to get their own equilibrium. The new creative crew doesn’t know what to do with Chevy Chase (who left the series after this season), but the rest of the cast chemistry makes the show hum, playing off one another like a jazz ensemble, with comments flying and responses ricocheting through every study meeting like a mad bop tune. One episode turns into a puppet musical and another brings in evil alternate universe versions of the characters. Meanwhile Dean Pelton (Jim Rash) moves his infatuation with Jeff (Joel McHale) up to stalking dimensions and Ken Leong runs with the “Changnesia” subplot.

Season Five marked the final network season of the wildly inventive sitcom that earned a cult audience through its turbulent history. Creator Dan Harmon returned and brought John Oliver back but Chevy Chase bowed out and Donald Glover left halfway through. Helping fill the gap is Breaking Bad costar Jonathan Banks as a criminology professor, who shares an office with another new professor: Jeff Winger, who finally graduated but couldn’t stay away.

The show was cancelled by NBC but it was revived as a streaming series by Yahoo! (in a short-lived attempt to compete with Netflix and Amazon and Hulu the streaming video marketplace) for a sixth and final season. With three members of the original cast gone and Jeff Winger now a teacher on the faculty, the study group has morphed into the “The Save Greendale Committee” with two new members added for the season: Francesca ‘Frankie’ Dart (Paget Brewster), a new administrator hired to get the college finances in order, and Elroy Patashnik (Keith David), an inventor who saves Dean Pelton from a virtual reality addiction. The series maintains the self-aware humor that made its reputation, with Abed providing commentary on the sitcom conventions it spoofs (queue montage sequence), and the episode Grifting 101 models itself on the movie The Sting, right down to the ragtime piano version of the show’s theme song. It’s clever and inventive and funny, with the same rapid-fire delivery, but it never quite recaptures the chemistry of its prime. Still, fans of the show will be glad to have one last visit with the characters, including two guest appearances by Yvette Nicole Brown as Shirley.

At its best, the show broke out of the sitcom mold with freewheeling detours into genre parodies and pop-culture goofs. The concepts are clever, the characters are fun, the chemistry is magic, and the execution is always surprising. And the show created a deep well of bit characters who ran through multiple episodes, and two in particular who became fringe characters in their own right: Dino Stamatopoulos as Alex “Star-Burns” Osbourne and Hollywood veteran Richard Erdman as senior citizen Leonard Briggs.

Funny is subjective, I know, and the freewheeling comedy may not be to all tastes, but in its prime it was the creative sitcom on TV.

[This review dedicated to the memory of Star Burns]