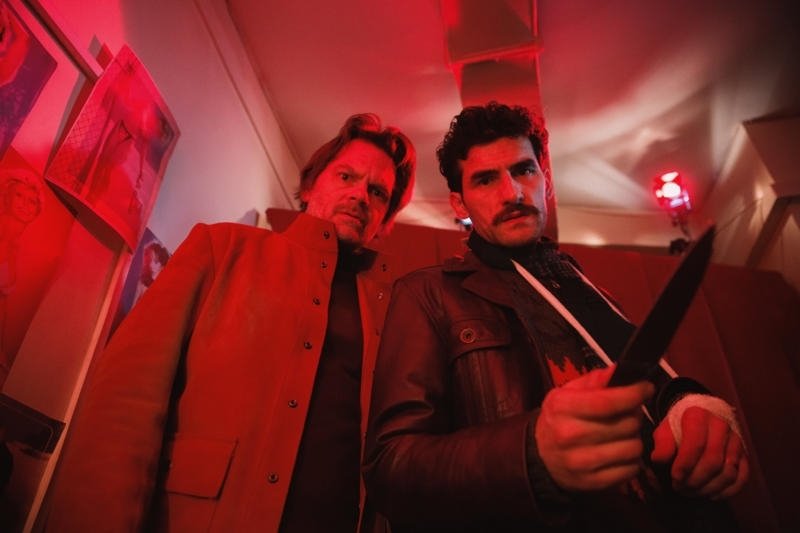 Amazon Prime’s new series Comrade Detective: Season 1 spoofs American eighties crime TV and Soviet Cold War clichés in the guise of a Romanian cop drama with eighties fashions, Communist propaganda, and American dubbing from the likes of Channing Tatum, Joseph Gordon-Levitt, and Nick Offerman. This is entirely tongue-in-cheek, with the tough-guy cop show conventions and TV street drama played straight (director Rhys Thomas learned the art of stylistic mimicry from years of Saturday Night Live comedy shorts) while the dialogue is strewn with party line pronouncements of the superiority of their socialist system over the corruption of the capitalist west. Tatum (who is also an executive producer) and writer/filmmaker Jon Ronson introduce the series with completely fabricated notes of the show’s fabled history (did you know Stanley Kubrick loved the show? Neither did Kubrick).

It “plays upon reunion films, with their mix of memory and desire, success stories and tales of failure, regrets and redemptions,” writes Los Angeles Times TV critic Robert Lloyd. “As before, it’s a knockabout mix of film styles and references, developed relationships and random inspirations; ridiculous and gross and ironic and somehow moving by turns, and sometimes all at once, it’s a takeoff, but not a takedown.”

Colossal is one of the surprises of 2017, a mix of giant monster movie and character comedy that slowly turns into darker territory to explore alcoholism and bullying, all through the prism of a bizarre fantasy spin on “Godzilla.” Anne Hathaway and Jason Sudeikis star (R). Reviewed on Stream On Demand here.

Morgan Freeman, Michael Caine, and Alan Arkin are retired buddies who plot a bank robbery in the comedy Going in Style (PG-13)

Foreign language films include Afterimage, the final film by Polish filmmaker Andrzej Wajda and the comic drama One Week and a Day from Israel (both not rated, with subtitles).

Available same day as select theaters nationwide is the moms-behaving-badly comedy Fun Mom Dinner with Katie Aselton and Molly Shannon (R) and sci-fi-comedy Brave New Jersey set during the 1937 “War of the Worlds” radio scare (not rated), plus indie romantic drama Some Freaks, and pitch-black crime comedy 68 Kill (all not rated).

Sing (2017) presents a cast of animated animals singing their hearts out with the voices of Reese Witherspoon, Scarlett Johansson, Seth MacFarlane, Taron Egerton, and Tori Kelly. Matthew McConaughey is your impresario and master of ceremonies for this jukebox musical and Jennifer Hudson and Jennifer Saunders co-star (PG).

The Founder (2017) dramatizes the story of how travelling salesman Ray Kroc (Michael Keaton) transformed McDonald’s into a billion-dollar franchise (PG-13).

The sprawling Cloud Atlas (2012), from filmmakers Lana and Lilly Wachowski and Tom Tykwer, stars Tom Hanks, Halle Berry, Hugh Grant, and others in stories across the centuries (R).

On the family friendly side is A Cinderella Story (2004) with Hilary Duff (PG) and the big screen comedy The Addams Family (1991) with Raul Julia, Angelica Huston, and young Christina Ricci (PG-13).

Our Kind of Traitor (2016), based on the John Le Carre novel, stars Ewan McGregor and Naomie Harris as civilians tangled in a British intelligence operation (R). Reviewed on Stream On Demand.

Richard Rush’s Oscar-nominated The Stunt Man (1980), one of the great movies about movies, stars Peter O’Toole as a driven director and Steve Railsback as a fugitive given a new identity as a stunt man (R). Reviewed on Stream On Demand here.

Kid stuff: the animated Lost in Oz: Season 1 reimagines the classic story with a whole new collection of adventures.

True stories: Dying Laughing (2017) profiles the lives of American comedians (not rated) and Elvis ’56 (1987), narrated by Levon Helm, looks at the year when Elvis leapt from local phenomenon to national star.

Gary Cooper stars in High Noon (1952), a lean, dusty western classic set to the real time of a ticking clock (not rated) (Amazon Prime and Hulu).

Arriving Saturday night is Collateral Beauty (2016) with Will Smith (PG-13) and on Sunday you can stream the stand-up special George Lopez: The Wall — Live from Washington, D.C. (not rated).

The superb Australian horror film The Babadook (2014) raises goosebumps with old-fashioned scares and relatable characters: a single mother (Essie Kent) still in mourning for her dead husband and struggling to cope with a problem child who arms himself an imaginary monster that may in fact be real (R). Reviewed on Stream On Demand here.

Golden Years (2016) is a lighthearted TV movie about a group of British pensioners who turn to robbing banks after bankers lose their pensions in bad investments. Bernard Hill, Phil Davis, Una Stubbs, and Alun Armstrong star (not rated).