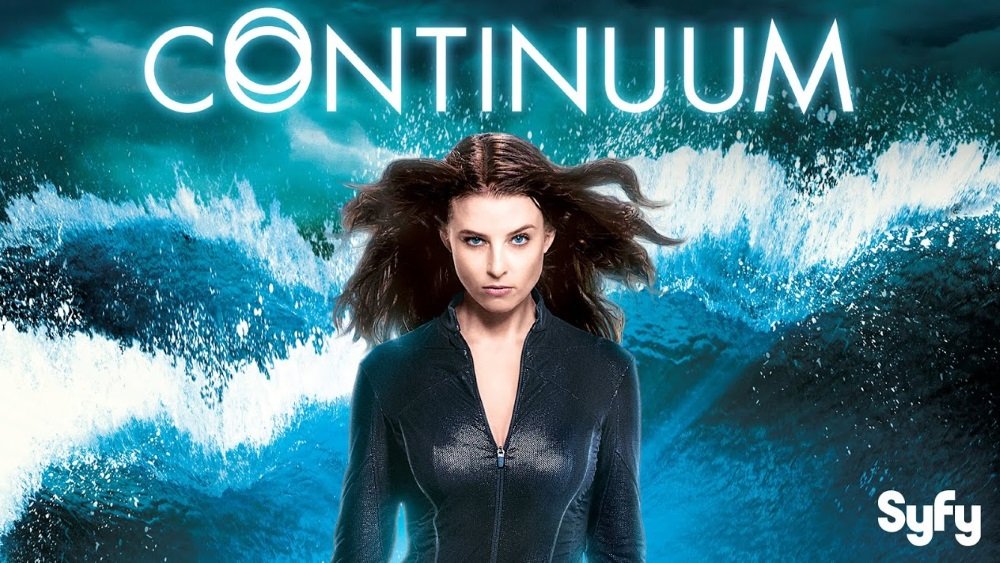 Continuum: Season 4 (2015) concludes the science fiction drama from Canadian about time-traveling guerrillas in modern-day Vancouver, one of the better original shows on SyFy of last few years (and one of the only shows shot in Vancouver that doesn’t pretend it’s another city).

A mix of time-travel science fiction and urban cop show, stars Rachel Nichols as future cop Kiera Cameron, who is transported back to 2012 along with band of revolutionaries who executed the most ingenious jail break that TV has concocted. Stuck more than 60 years in the past, she teams up with Vancouver police detective Carlos Fonnegra (Victor Webster) and budding technology phenom Alec Sadler (Erik Knudsen) to stop the terrorists from using their knowledge to sabotage the future.

It’s an eventful, interesting genre show that never fails to inject a little sci-fi color with flashbacks to the future, but the defining twist that gives the show such dramatic potential is the contradiction at the center of the conflict. The loyal, moral cop Keira stands for the status quo of a corporate oligarchy that rules the future with an efficiency that doesn’t worry about civil rights, yet she is dedicated to protecting every human life while the terrorists fight the power with the bloodthirsty vengeance of gangsters. They fight for mankind, but don’t care about the civilians that get caught in the crossfire. The potential is only scratched in the brief first season, but the contradictions elbow their way into the stories nonetheless, sometimes layered in for effect, sometimes by virtue of the collision of character. The revolution, it seems, attracted some pretty ruthless personalities.

The first two season are quite fun and involving, the third gets bogged down in multiple time strands and changing realities, with a whole new set of characters and an evil doppelganger gambit.

The series wraps up with a limited fourth season of a mere six episodes. The fractured timelines that tangled the third season are mostly swept aside as former enemies team up to save the future from yet another time-travelling strike force with its own scheme. But it still never quite recovers the energy and ingenuity of the first seasons and it fails to make Keira’s obsession to return home at all costs anything but a dereliction of responsibility in light the sacrifices made around her. Even the most contrived excuses cooked up in the dialogue can’t distract from actions that are out of character from such an idealist, no matter the ultimate payoff to the story.

The final season does, however, bring former enemies together over a shared commitment to not just saving their world but working for a better future, and it does bring closure, which fans who invested in those early seasons will appreciate.

One last thing: while this might not mean so much to most viewers, I love the way it makes use of its Vancouver setting. It’s a distinctive city and, with so many shows shooting there, it’s a pleasure to see it play itself and embrace its character rather than hide it.

The entire series is now on Netflix. Queue it up!