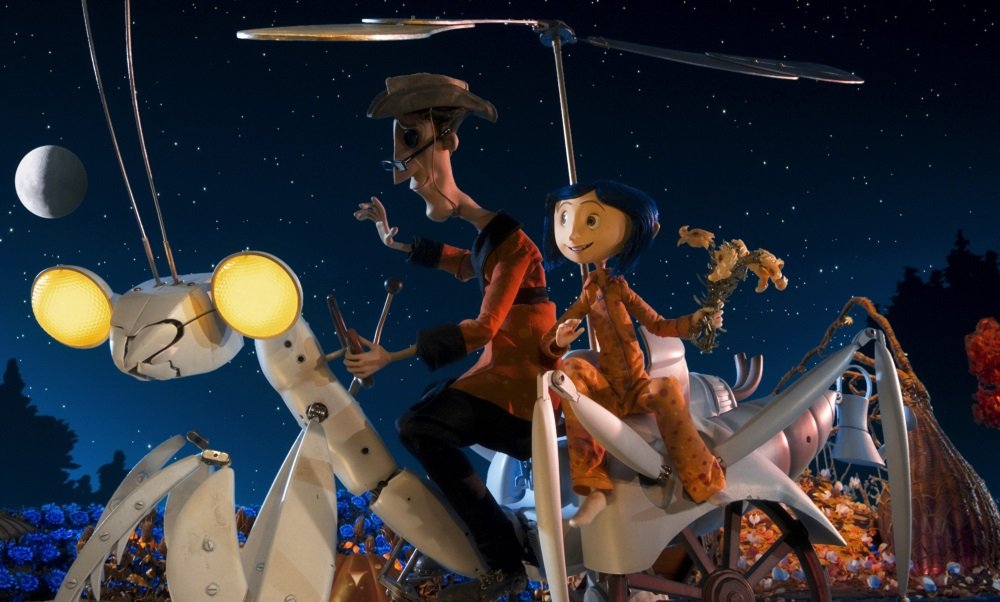 Coraline (2009) opens on a rag doll efficiently taken apart by hands of skeletal steel (like Edward Scissorhands but with menacing needles for fingers) and then turned inside out and recreated in the image of the blue-haired heroine Coraline. It’s produced in the old-school stop motion animation style of articulated dolls and hand-crafted props increasingly nudged out by the slick perfection of computer animation, which makes it all the more eerie and tender and weird and sets the perfect tone for the film to come, a gorgeous and imaginative storybook fantasy with nightmare echoes. Think Dr. Seuss by way of Edward Gorey, all executed with the creative flair and painstaking detail that Henry Selick brought to The Nightmare Before Christmas.

A marvelously willful, doll-like moppet in blue hair, Coraline (voiced by Dakota Fanning) is an adolescent with nothing to do in her new home, a creaky old house subdivided into apartments inhabited by eccentric neighbors. Ignored by her busy parents and too proud to play with the goofball boy next door, she spends her days with a curiously lookalike doll she names “Little Me” and her nights going down her own version of Alice’s rabbit hole where a cheery mommy doppelganger (Teri Hatcher), her Other Mother, tries to keep her. Everyone is more fun and attentive, every day is a sunny play date, and everyone has buttons for eyes. That last one is more than a little disturbing.

Coraline, adapted from the dark fantasy storybook by Neil Gaiman, is classic fairy tale stuff, the story of a girl who escapes boredom and parents too busy to pay attention to her through a fantasy world where everything is better, brighter, tastier, and more fun, fun, fun. But all this wish fulfillment is a facade that sags and decays over time, literally rotting over the shadowy reality under it, or stretched into an unsettling parody of itself as the monstrous creature underneath pokes and pushes through.

Selick and his crew give Coraline the body language of a budding drama queen and the delight of a little girl and they create a world to match, stuffed with delights, secrets and distinctive personality. There’s spooky horror under the candy-house fantasy. It makes for a gorgeous and imaginative storybook fantasy with nightmare echoes, a horror movie for kids that may be too much for the youngest (it’s rated PG for “thematic elements, scary images, some language and suggestive humor”) but perfect for those children itching slowly move into more challenging stories.

It was an Academy Award nominee in the animated feature category.

The film was presented in “Real 3D” in select theaters. You can get both 2-D and 3-D versions of the movie on DVD, with four pairs of 3-D glasses with magenta/green lenses. It’s a poor substitute for the polarized lenses of theatrical 3-D and puts a strain on the eyes but it’s the best we’ve got for home video. The Blu-ray 3D edition features the far more effective Blu-ray 3D technology (must have compatible Blu-ray player and TV screen).

Henry Selick packs in more information than you’d think possible in a single commentary track and the 36-minute “The Making of Coraline” explores the techniques and the physical process of making a stop motion film in 3-D without losing the sense of wonder and magic in the film. Also includes two brief featurettes and deleted scenes.