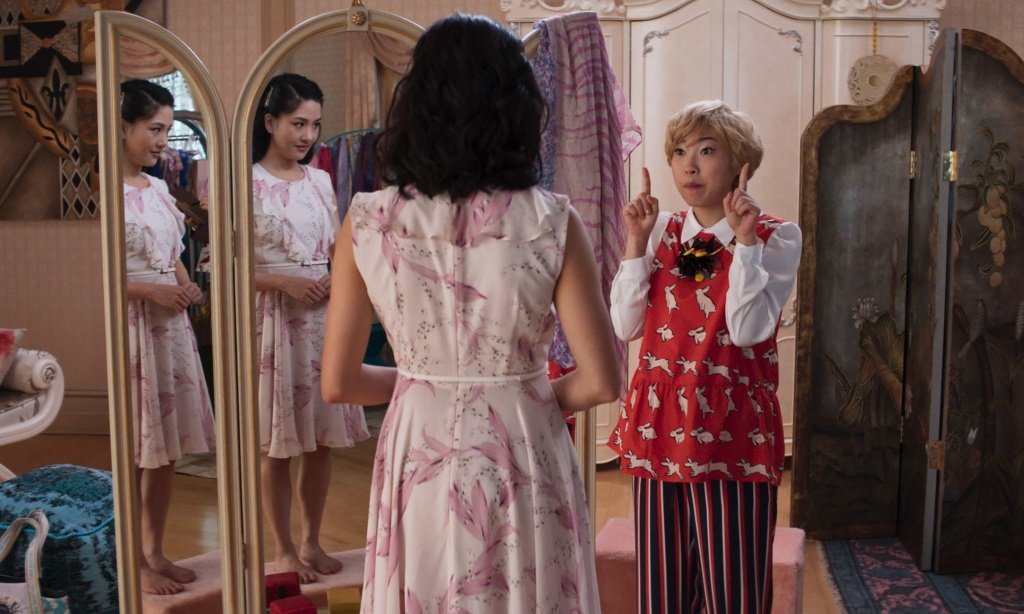 A Chinese-American professor (Constance Wu) collides with the culture of the ultra-rich in Singapore when she meets her boyfriend’s family in Crazy Rich Asians (2018, PG-13), the hit romantic comedy based on the semi-autobiographical novel by Kevin Kwan. Henry Golding, Awkwafina, and Michelle Yeoh co-star. Now on Cable On Demand and VOD, also on DVD and at Redbox.

Sorry to Bother You (2018, R), the feature debut of hip-hop artist turned filmmaker Boots Riley, is a social satire as comic fantasy starring Lakeith Stanfield as a telemarketer who finds the secret to sales success and rises up the ladder of a soulless corporation. Tessa Thompson, Jermaine Fowler, Terry Crews, Danny Glover, and Armie Hammer co-star. Streaming on Hulu.

The British miniseries version of the classic Little Women, starring Emily Watson as the mother of four sisters, originally played on PBS in the U.S. and is now streaming on Amazon Prime Video.

For something a little less serious, Mystery Science Theater 3000: The Gauntlet offers more cheesy films for Jonah Ray and the bots on the Satellite of Love to heckle. Six new episodes on Netflix.

FilmStruck, the premiere streaming service for American and international classic movies, ends its service after two years on Thursday, November 29. Criterion has announced a plan to restart its own service in Spring 2019 and Warner Media (parent company of Turner Classic Movies) promises to bring back its classics in a new streaming service in a year, but until then this is the end. If you’re a subscriber, time to see those films on your watchlist or browse through the catalog one last chance to stream some of the greatest films ever made.

The American indie drama Blindspotting (2018, R) follows a man on the final days of probation as his best friend pulls him back into crime. Also new:

Foreign affairs: in the comedy The Tribe (Spain, 2018, with subtitles) a CEO loses his fortune and his memory and is reunited with his biological mother, who leads a vocational dance troupe. Also new:

Rupert Grint and Nick Frost star in Sick Note: Seasons 1 & 2, a black comedy from Britain about a compulsive liar misdiagnosed with a fatal illness. Lindsay Lohan co-stars in the second season.

More streaming TV: the culinary competition show The Final Table: Season 1 pits the top chefs from around the world in a series of cook-offs. Also new:

Javier Bardem is drug lord Pablo Escobar and Penélope Cruz is journalist Virginia Vallejo in Loving Pablo (2017, R), based on the true story of their romance.

Streaming TV: Before he became The Doctor, Peter Capaldi was the ruthless political fixer Malcom Tucker in The Thick of It (2005-2012), the sharp British political satire from Armando Iannucci (creator of Veep). Prime Video has three seasons. Also new:

Foreign affairs: The Night Eats the World (France, 2018, not rated, with subtitles) is a zombie horror about the last human in Paris overrun with the undead. Also new:

John Turturro and Sam Rockwell star in Box of Moonlight (1996, R), a charming and warm tale of an uptight executive rediscovering wonder. Prime Video and Hulu.

The miniseries My Brilliant Friend (Italy, with subtitles) looks back on a lifelong friendship that began in 1950s Naples. New episodes arrive Sunday and Monday nights over the next few weeks.

Enemies: The President, Justice & the FBI (2018) is a four-part documentary series from Oscar-winning filmmaker Alex Gibney that looks at the tensions between the White House and the FBI. New episodes each Sunday.

TCM Select Pick of the Week: It was a flop upon its release but Night of the Hunter (1955), Charles Laughton’s only film as a director, is today justly celebrated one of the most beautiful pastoral nightmares the cinema has seen. Robert Mitchum gives a fire and brimstone performance as a demonic con man in preacher man’s robes who stalks two children in search of treasure, and Lillian Gish is a tough but tender shepherd of lost sheep orphans. Part rural film noir and part expressionist parable, this is an American original boasting some of the most striking images to escape from Hollywood.

It’s part of the “One and Done” collection of films by directors who only made a single features. The selection includes Jean Vigo’s L’Atalante (France, 1934, with subtitles), the eerie indie horror film Carnival of Souls (1962), and David Byrne’s True Stories (1986, PG).

“Director of the Week: Charles Walters” puts the focus on the MGM musical specialist and “Star of the Week: Rudolph Valentino” presents 11 films starring the silent movie icon.

Agatha Raisin and the Wizard of Evesham (2018), the first of three feature-length mysteries starring Ashley Jensen as the London public relations professional who develops a second career solving mysteries in rural England, debuts exclusively on Acorn TV. The next features debut in December and January.

David Morrissey is a police detective in The City and the City (2018), the British TV mini-series adaptation of China Miéville’s acclaimed novel about a murder in a world where two cities co-exist in the same space. It makes its American debut on BritBox.

Pingback: What to stream: ‘Crazy Rich Asians’ on VOD, ‘First Reformed’ on Amazon, ‘Sorry to Bother You’ on Hulu - seanax.com
Comments are closed.