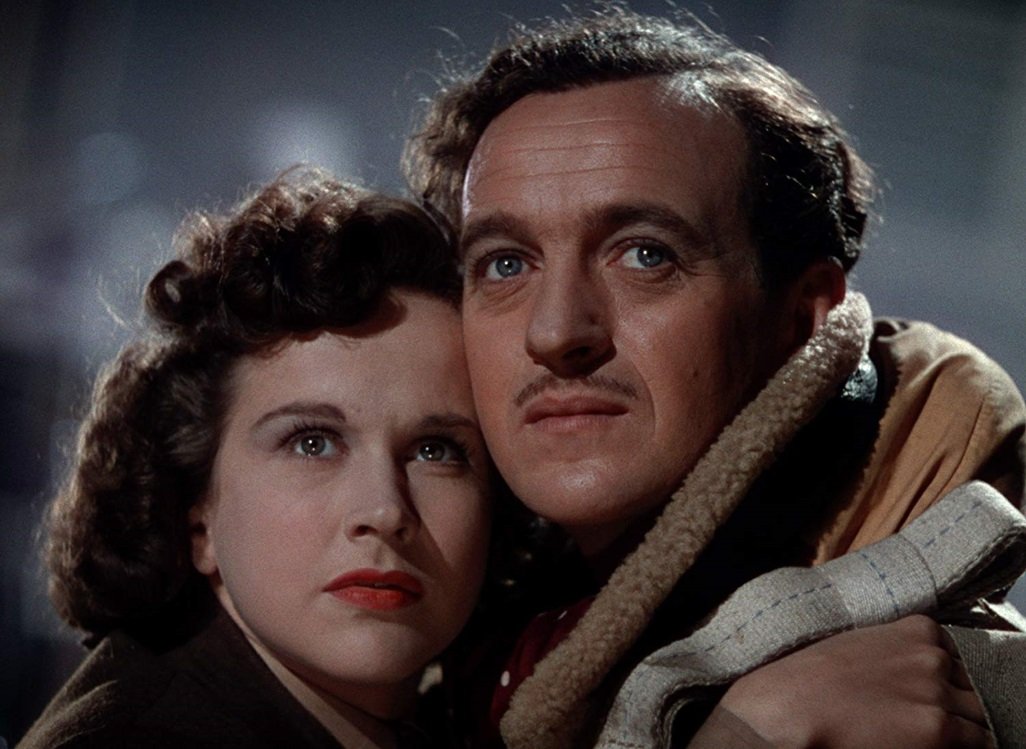 A Matter of Life and Death (Criterion, Blu-ray, DVD)

Michael Powell and Emerich Pressburger’s A Matter of Life and Death (1946), originally released in the U.S. as Stairway to Heaven, is as gorgeous and romantic as films come.

The film opens with a celestial prologue and narration providing a sense of cosmic comfort of someone watching over it all, of some divine authority in charge. It plays like the British answer to the opening of It’s a Wonderful Life, which came out the same year (is it coincidence that the post-war era inspired such a need for heavenly affirmation?), but immediately swoops down from the majestic calm of the stars into the terror of World War II and a bomber pilot giving his farewell to life over the wireless as his plane burns furiously around him and he prepares to make a blind leap without a parachute. Powell gives the scene terrible beauty—the wind whips the cabin, the fire flickers around his face, the clouds have a texture so palpable they look like you could step out into the sky and walk to heaven on them—and an emotional power to match. Peter Carter (David Niven) is resigned to his fate but his heart beats with the desperate passion of a man determined to embrace every last sensation in the final seconds of his life. That combination of adrenaline-powered strength and mortal vulnerability gives him the permission and the need to embrace, if only through voice, the American girl (Kim Hunter) at the other end of the wireless. And she falls just as surely in love with him.

It would be a beginning that few directors could match with the drama that followed. Powell does. That emotional burst, that passion for life and love, is followed through with a struggle to hang on to life once Peter survives an impossible blind jump and meets the voice at the other end, falling impossibly in love while the clerks up above note that a soul is missing from the balance sheets. An aristocratic emissary (Marius Goring) in 18th Century French finery (asked how he ended up in heaven, he references the French Revolution and explains the scarf around his neck when he remarks, “I lost my head”) is sent to retrieve the missing soul, leaving the cool monochrome sheen of heavenly majesty for the saturated bloom of color on Earth.

The line “Ah! We are so starved for Technicolor up there” could as easily be applied today. This color has a surreal magic missing in modern films. Powell and Pressberger are as passionate about filmmaking as young poet Peter is about life. Their creativity is both fantastic and organic, their imagery spellbinding and gorgeous, and their scripting clever and witty, and cinematographer Jack Cardiff offers a visual canvas to match their emotionally-charged vision. They never betray whether this heavenly world is real or all in Peter’s mind (the result of his blistering headaches) but neither are they coy in the play between the worlds. As Peter’s doctor (a hearty and warm Roger Livesay) observes, these visions are real to Peter, and so they are to him too. And to us.

It’s a perfect romantic fantasy, a stunning creative achievement, and one of my favorite films, and at long last on Blu-ray in a gorgeous transfer that glows on the screen. We’re so starved for Technicolor here too.

Criterion presents the film’s Blu-ray debut (as well as a new DVD edition) in a newly restored 4K restoration. New to this special edition is a new 32-minute interview with editor Thelma Schoonmaker (Powell’s widow), a new half-hour documentary on the film’s special effects, the 1998 short film The Colour Merchant on cinematographer Jack Cardiff (32 mins), and a 1986 episode of the British series “The South Bank Show” on Powell’s career hosted by the filmmaker himself (55 mins), plus a short restoration demonstration. Carried over from the previous DVD release is an introduction by Martin Scorsese (9 mins) and commentary by Powell historian Ian Christie, and the accompanying fold-out insert features an essay by Stephanie Zacharek.

A Matter of Life and Death (Criterion Collection) [Blu-ray]

A Matter of Life and Death (Criterion Collection) [DVD]