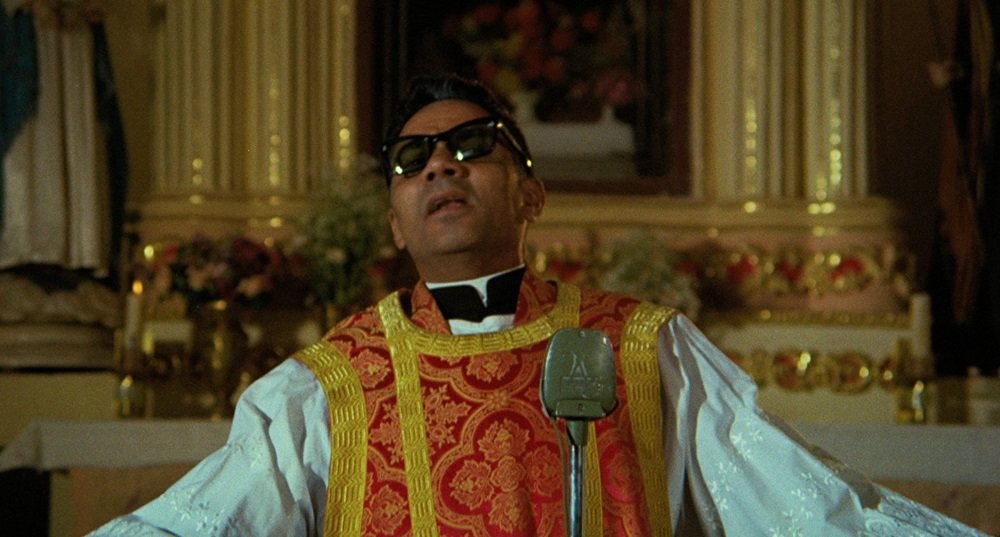 Time to play catch up with Criterion releases of the past couple of months.

I confess that I had never heard of Canoa: A Shameful Memory (Mexico, 1976) before Criterion announced it. Having now seen, I wonder how that could have been. While not on my radar, this is celebrated as a landmark of Mexican cinema (as testified by both Guillermo Del Toro and Alfonso Cuaron, who participate in Criterion’s supplements) for both its filmmaking and the political commentary and criticism it snuck past government censors.

Set in the political unrest of 1968, as the Mexican government was aggressively suppressing student protests, and based on real life events, the film opens with the news report: four young men were killed and another critically injured in San Miguel Canoa, a small, impoverished village a few miles from the city of Puebla. Director Felipe Cazals uses a mix documentary techniques in the village (actors play witnesses describing the culture of the town and the power wielded by the priest) and more conventional dramatic scenes of the boisterous hikers from Puebla (all apolitical employees of the university).

Those mock-documentary scenes, staged as interviews with an unseen news crew, have a stylized quality that suggest a sense of performance from the subjects as they recount the way the priest has essentially become a gangster controlling the politicians and shaking down the population from the pulpit, and branding his political enemies apostates. There’s no reason not to believe them, but as the cameras leave the farmers and working folks for the political officials, the commentary becomes more defensive, less a discussion of conditions than a justification for the priest’s power over the town. The performances of the young men from Puebla are big and overemphatic, like a naïve comedy of boisterous buddies goofing around. They appear amateurish but it sets up a contrast between the seriousness of the village scenes and the buddy movie ease of the young men who just want to hike and have fun. The two films collide as the boys arrive in the village by bus and, stranded in the rain with no busses back to the city until morning, seek shelter. The direction and performances may appear amateurish at first but it sets up a contrast that converges in a startling and shocking act of savagery. Whispers are whipped into rabble-rousing accusation and the townsfolk brutally attack the strangers, stirred into hysteria by the priest’s mouthpieces.

It’s historical drama and political commentary as horror film, with bloody scenes of brutal violence as the innocent students are massacred with machetes and rifles, a raw, grimy sequence that the filmmaking has in no way prepared us for. On the contrary, for a brief moment we appear to be saved from the spectacle of violence with a digression back to the docu-commentary. The cut back to the angry mob unleashed is a shock.

The historical setting did not resonate with me, I confess, and it took the supplements to explain that a few weeks after this atrocity, police massacred hundreds of student protesters in Mexico City, a notorious event well-known to Mexican audiences in 1976. But the portrait of a community leader manipulating the ignorant and illiterate to blindly follow him with fear, xenophobia, and religion is relevant to any time and place, and Cazals’s mix of mock-documentary and buddy comedy, surface naïveté and political sophistication, is a discovery. Canoa: A Shameful Memory is a remarkable political document that combines unreliable narrators, documentary style, and primal drama into a provocative portrait of despotism, manipulation, and mob violence.

On Blu-ray and DVD from Criterion, from a newly-restored 4K digital transfer supervised by director Felipe Cazals, in Spanish with English subtitles. It features a video introduction by filmmaker Guillermo Del Toro (4 minutes) and “Canoa: 40 Years Later – A Conversation Between Alfonso Cuaron and Felipe Cazals,” an in-depth, 54-minute discussion, plus the trailer and a fold-out insert with an essay by critic Fernanda Solórzano.
Canoa: A Shameful Memory [Blu-ray]

Multiple Maniacs (1970) is quite possibly the trashiest and most tasteless film to get the Criterion treatment. And I say that with love and appreciation. Shot on B&W 16mm film on a tiny budget by John Waters (who is not just writer and director but cameraman and editor) on the streets of Baltimore with a cast and crew of his friends, this is underground cinema by way of a gleefully outrageous home movie. The cover of the disc itself proclaims it “a celluloid atrocity!” and the evidence of the film seems to support the claim.

It opens on a dandy of a carnival barker (David Lochary) in front of a tent pitched in what appears to be a suburban park (it’s actually the lawn of Waters’ parents) hawking “Lady Divine’s Cavalcade of Perversion,” a modern sideshow he describes as “the sleaziest show on Earth.” He could be talking about the film itself. John Waters’s favorite star Divine (the drag incarnation of Glen Milstead) is Lady Divine, a flamboyant crime queen who lures victims into her sideshow to rob them and blackmails David into being her lover, advance man, and master of ceremonies. While he plots her murder with his secret girlfriend (Mary Vivian Pearce), Divine comes looking for revenge (Edith Massey plays a bartender who rats out David’s tryst) and meets Mink (Mink Stole), a homeless dyke who seduces Divine in a church with a rosary while they have visions of the Christ and the stations of the cross.

Through the course of the ragged production, shot mostly on the streets of Baltimore, Divine is molested in an alley by her own crew, raped by a giant lobster, and goes on a rabid killing spree, literally foaming at the mouth while she chases crowds through the streets in what looks like a twisted parody of the opening scenes of A Hard Day’s Night. It’s not exactly a classic but it is notorious for its aggressively tasteless parade of taboo-breaking scenes and Divine delivers it all at a high pitch of hysteria. It features nudity, gruesome violence, cannibalism, drug use, and foul language.

Never before on disc, it is restored in 4K from the original elements (which Waters had stored in his attic). When folks say things like, “The movie never looked or sounded this good” in a Blu-ray review, it’s often harmless hyperbole. In this case, Waters used digital audio tools to balance the soundtrack, and the digital video clean-up surely makes this look better than the first 16mm struck from this negative. Features commentary by director John Waters, interviews with cast and crew members Pat Moran, Vincent Peranio, Mink Stole, Susan Lowe, and George Figgs, and a video essay by Gary Needham, all produced for this edition, plus a fold-out insert with a new essay by critic Linda Yablonsky.
Multiple Maniacs [Blu-ray]

Blow-up (1966) – David Hemmings is a jaded fashion photographer with a face full of insolence who may have snapped a murder during a candid shoot in the park in Michelangelo Antonioni’s English language debut. As Vanessa Redgrave, the mystery woman of his photograph, tracks him down to retrieve the snapshots, he becomes obsessed with photos, but the more he blows the photos in question up, the more abstract and unknowable any reality they hold becomes. Set in swinging London, full of mod fashions, free love, a score by Herbie Hancock, and an appearance by the Yardbirds (not to mention a surly misogyny in the way Hemmings treats his “birds” as sex toys and impersonal mannequins), it’s a timepiece by way of Antonioni’s brand of contemporary alienation. Sarah Miles, Jane Birkin, and Gillian Hills co-star.

It won the Best Picture and Director Awards from the National Society of Film Critics and the Palm D’Or at Cannes and it inspired Francis Ford Coppola’s The Conversation and Brian De Palma’s Blow-Out. Today its groundbreaking nudity and sexuality is tame, but the cool images (shot by Carlo Di Palmi) are pure Antonioni and the climactic scene still a marvelously understated mindbender.

Criterion presents the Blu-ray debut and a new two-disc DVD edition from a new 4K digital transfer. Antonioni was precise with his color and his imagery and this brings out the vivid color scheme and the crispness of the imagery. Also features a strong collection of new and archival supplements. “Blow-up of Blow-Up” is a new 52-minute documentary on the context and production of the film from director Valentina Agostinis and “Antonioni’s Hypnotic Vision” is a 45-minute interview featurette with photography curators Walter Moser and Philippe Garner and art historian David Alan Mellor. There’s a 2016 interview with Vanessa Redgrave (44 mins), archival interviews with David Hemmings from 1968 (5 mins) and 1977 (20 mins) and Jane Birkin from 1989 (8 mins), and an excerpt from the 2001 documentary Michelangelo Antonioni: The Eye That Changed Cinema featuring an interview with Antonioni.

This one comes is a sleek digipak with a 68-page bound booklet featuring essays by film scholars David Forgacs and Stig Björkman, a reprint of the questionnaires that Antonioni handed to photographers and painters while preparing the film, and the Julio Cortazar short story that inspired the film.
Blow-Up [Blu-ray]