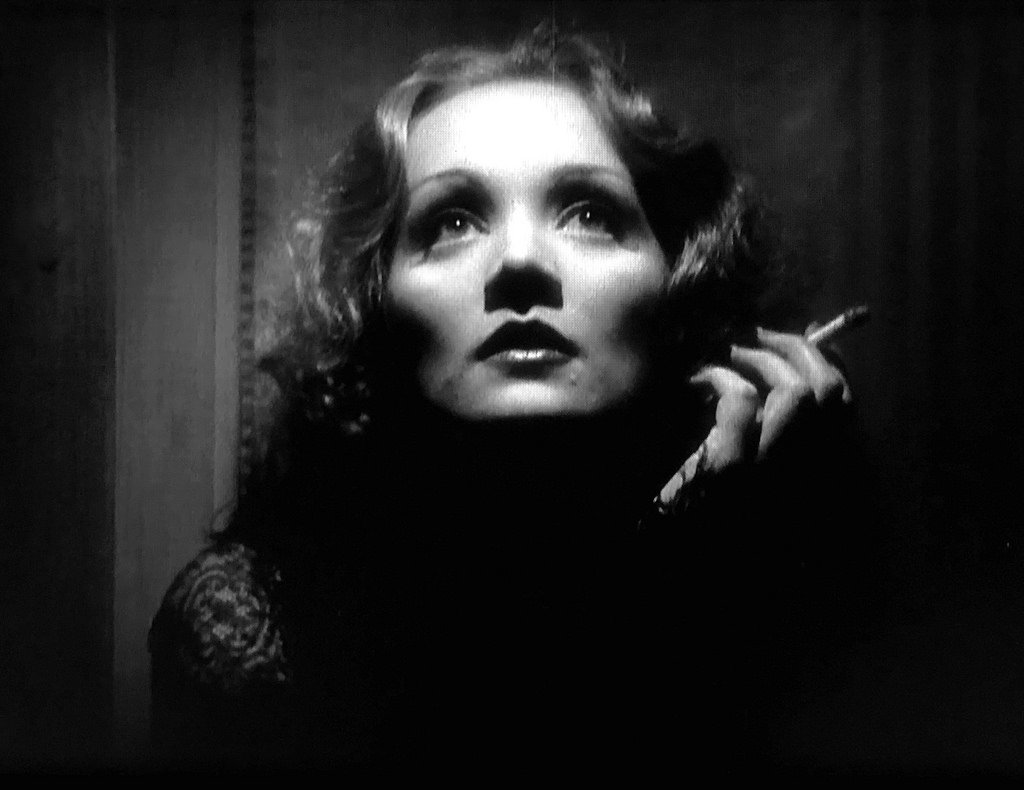 At the dawn of the sound era, as German movie star Emil Jannings left Hollywood to return to Germany, the actor invited Austrian-born/American-raised director Josef von Sternberg (who directed Jannings in The Last Command, 1928) to Universum Film A.G. to direct him in that studio’s first sound film, The Blue Angel (1930). It was a worldwide smash and von Sternberg returned to Hollywood with an international hit and a new star: Marlene Dietrich. Not exactly what Jannings had in mind, but then how could he know that the theatrical thickness of his gesture-laden theatrics would come across as simply old-fashioned next to the brash, lazy, sensual quality of Dietrich’s easy screen presence and modern performance.

Von Sternberg and Dietrich worked together on six more films for Paramount Pictures through the early 1930s, all lavish, lush productions that bring Hollywood art and craft to stories of sexuality and power with exotic overtones and fetishistic undercurrents. Until Criterion’s long-awaited box set Dietrich & von Sternberg in Hollywood, none of them had ever been on Blu-ray and two had never even been released to DVD. They have all been remastered in either 4K or 2K for this amazing collection, easily one of the essential home video releases of 2018.

Dietrich made her American debut opposite Gary Cooper in Morocco (1930), a French Foreign Legion melodrama that casts the exotic Dietrich as a sultry cabaret singer. Hollywood star Cooper got top billing and his brawny male beauty gets its own glamour treatment from von Sternberg’s camera but the director made Dietrich the most memorable scenes—notably an entrance wearing a man’s tuxedo and kissing a female a patron on the lips (an early suggestion of lesbian chic)—and the final image as she trudges through the desert after a departing soldier. It earned Oscar nominations for Dietrich, von Sternberg’s direction, Lee Garmes’ cinematography, and the art direction of Hans Dreier, and kicked off a unique film cycle that combines ornate set design, delicate lighting, and a battery of scrimlike devices (hanging nets, smoke, and cross-hatched bamboo, wooden slats and the like, a style that Sternberg perfected in his silent movie masterpiece The Docks of New York) to create a dense visual canvas that set Dietrich off like a jewel.

Dietrich received top billing for Dishonored (1931), where she plays a war widow and impoverished but resilient streetwalker who is recruited by the Austrian Secret Service Chief (Gustav von Seyffertitz) to serve her country as a Mata Hari-like spy, code name X-27. Von Sternberg takes us from the poverty of the street (our first glimpse of Dietrich is limited to her legs, clad in black hose with runs and tears as the authorities carry a suicide victim from her apartment building, to the decadence of high society where she begins her first assignment, following military leak from a high-ranking Austrian officer to Colonel Kranau (Victor McLaglen), a Russian spy in Vienna. Apart from a wonderful bit of theater where she plays a wide-eyed, innocent maid in a Russian command post, Dietrich is all hooded eyes and impassive enigma, a tough, resilient survivor who uses flirtation as a tool and a patriot unashamed of her past. McLaglen, so often the blustery, working class joe or angry brute, plays Kranau with a society grin and toothy smile radiating more calculation than warmth. His sophisticated manner, cultured accent, and clipped delivery offer a McLaglen I’d not seen on the screen and he’s terrific, a match for the wiles of Dietrich’s dedicated agent.

“It took more than one man to change my name to Shanghai Lily,” says Dietrich in Shanghai Express (1932) with world weary attitude and a touch of bitterness behind hooded eyes and an impassive expression. It’s as close as the film comes to announcing her profession as a high-class prostitute, a suggestion that wouldn’t get past censors in a couple of years, yet this intoxicatingly exotic thriller set on a train evacuating foreign nationals from Peking to Shanghai in the chaos of war has a romantic heart behind its front of mercenary sexuality. Lily’s emotional wound from the past that is reopened when she meets a former lover (Clive Brook), a British officer who abandoned her years before and now judges her on her profession rather than her character. It’s visually glorious but also passionately heartfelt and it features a superb supporting cast of characters, from Anna May Wong as Lily’s equally guarded fellow professional and traveling companion to a yellow-face Warner Oland (soon to play Charlie Chan) as a Chinese rebel leader who is equally obsessed with Lily. Von Sternberg directs from a script by Jules Furthman (though Sternberg claimed credit, insisting he directed the film from a one-page treatment) and delivers his greatest treatise on hypocrisy under masks of respectability and the depths of courage and honor of outcasts from respectable society. It earned Academy Award nominations for best picture and best director and won for Lee Garmes’ seductive cinematography.

In Blonde Venus (1932), Dietrich plays a nightclub entertainer who returns to the stage when her scientist husband (Herbert Marshall) contracts radium poisoning. When he mistakes her career choices for an affair, she winds up in a custody battle over their child. Von Sternberg opens the film with a sexy skinny-dipping spectacle that teases with suggestions of flesh not actually scene and he gives Dietrich an unforgettable stage entrance in a gorilla suit.

The Scarlet Empress (1934), the most absurdly baroque of von Sternberg’s tributes to Marlene Dietrich’s luminous beauty and casual sexuality is, in the director’s own words, “a relentless excursion into style.” The often self-aware and witty drama of the rise of Russia’s Catherine the Great is less historical epic than pure expressionist decadence, a portrait of corruption that transforms a simple country maiden into a sexually rapacious and violently ambitious monarch. The bizarre, mind-blowing melodrama, with its lavish decor, grandiose sets, grotesque statuary, and even more grotesque characters, was an expensive flop with audiences. Now it’s a cult classic and arguably the greatest triumph of the Sternberg/Dietrich cycle. It’s also the only one of the six films to have been previously released in a Criterion DVD edition and has been newly remastered for this release.

Their final collaboration The Devil Is a Woman (1935), based on the same story that inspired Luis Bunuels That Obscure Object of Desire, is at once Sternberg’s most visually splendid and narratively austere film. A dense web of veils, nets, shutters and screens, Sternberg’s dreamiest film suffers from the blank performances of leads Lionel Atwill and Cesar Romero, the rivals in pursuit of Dietrich’s calculatingly disdainful lady of Spain. Sternberg, who photographed the film himself, appears to have ignored the men completely in his total fixation on Dietrich and pushes the limits of style as substance. It’s maddeningly uninvolving on a narrative level yet composed of images so ethereal you can float away on them.

Though acclaimed today, Sternberg’s last three Dietrich films were critical and financial disappointments and his career never recovered from the disastrous experience of the unfinished I, Claudius (described in the documentary The Epic That Never Was). He finished a few more films but never again worked with Dietrich, who went on to more conventional films (a role opposite James Stewart in the comic western Destry became her biggest hit and revived a flagging career), but Sternberg creates a unique kind of glamour in his films with Dietrich that has never been replicated by any other director. His cinema is his storytelling and it’s marinated in shadows and nets and a luxurious mood. And his films consistently address issues of sexuality and power through the dense imagery as well as the melodramatic narratives.

It’s worth noting that with this release, most of the essential cinema of Josef von Sternberg is now available on disc, and this brings the count of Blu-ray releases up to eight. I hope someday for a Blu-ray upgrade of Criterion’s DVD box set Three Silent Classics by Josef von Sternberg (Underworld, The Last Command, and The Docks of New York).

Criterion offers the Blu-ray debuts of all six films, each mastered from new 2K or 4K digital restorations from duplicate negatives for Shanghai Express and The Devil is a Woman and archival preservation prints from UCLA for the rest, in a six disc set filled with supplements. The 30-minute Weimar on the Pacific looks at Marlene Dietrich’s German origins with film scholars Gerd Gemünden and Noah Isenberg, the 22-minute Dietrich Icon covers her Hollywood career and von Sternberg collaborations with film scholars Mary Desjardins, Amy Lawrence, and Patricia White, and film scholars Cristina Alvarez Lopez and Adrian Martin present the 30-minute visual essay Bodies and Spaces, Fabric and Light on the visual style of the films.

And there are video interviews with film scholars Janet Bergstrom and Homay King, director Josef von Sternberg’s son, Nicholas, Deutsche Kinemathek curator Silke Ronneburg, and costume designer and historian Deborah Nadoolman Landis; the archival Paramount short subject The Fashion Side of Hollywood (1935) featuring costume designer Travis Benton and footage of Dietrich; an archival 1971 interview with Marlene Dietrich filmed for Swedish TV; the audio-only vintage radio play The Legionnaire and the Lady, a 1936 Lux Radio Theatre adaptation of Morocco featuring Dietrich and actor Clark Gable; and recording of the song “If It Isn’t a Pain” cut from the film; plus a booklet featuring essays by Imogen Sara Smith, Gary Giddins, and Farran Smith Nehme