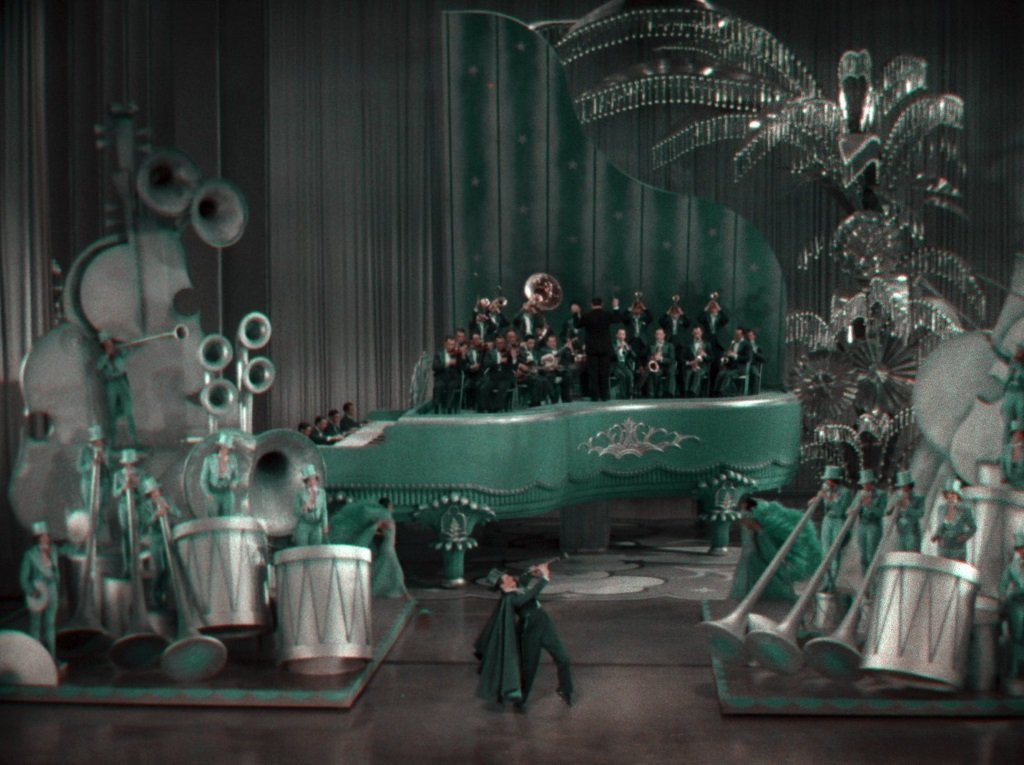 I came to King of Jazz (1930) with low expectations, I confess. I knew that the early sound film is a landmark production but I’m no fan of the stage style revue films and expected this to be another stiff, stagey, unimaginative collections of musical acts and comedy bits stitched together with all the imagination of a grade school recital. What a marvelous surprise to find that, in addition to being a cinematic curiosity, King of Jazz is inventive, innovative, and entertaining, a stage revue reconceived for the big screen in the early sound era by stage director John Murray Anderson who embraces the possibilities of cinema in surprising and inspired ways.

Paul Whiteman and his Band was the most popular musical attraction of the 1920s, headlining the biggest venues in the U.S. and selling millions of records. He was a natural for Hollywood to sign up for the sound revolution in movies except for one thing: he was a showman, not an actor, and he rejected all of the scripts the Universal proposed. After a series of false starts, Universal finally settled on a showcase for his talents: a lavish revue featuring musical acts, dance numbers, black-out comedy sketches, and even an animated cartoon (created by Walter Lantz, the father of Woody Woodpecker), all grounded by performances of the Whiteman band.

There’s no story to the film—the entire project is framed by “Paul Whiteman’s Scrapbook,” a giant prop with pages turned as title cards for each act—and the comedy bits (featuring Laura La Plante, Slim Summerville, and young Walter Brennan) are corny at best. And apart from a performance of Gershwin’s “Rhapsody in Blue” (which Whiteman’s band debuted a couple of years earlier) there is nothing even close to jazz in the collection of popular dance tunes and novelty songs. Yet there are some ingenious set pieces and visual ideas in the pictures, like when Whiteman pulls out a dollhouse-sized bandstand and watches his miniature band climb out of his satchel and take their place on the tabletop stage, hovering over with a smile, a giant watching his Lilliputian orchestra. It’s a simple miniature effect, technically speaking, but executed so seamlessly it is a beguiling trick.

Like most of the earliest sound-era features, there is limited camera movement, with a few simple tracks or dolly shots, smoothly done but limited in scope. First-time (and, for that matter, only-time) director John Murray Anderson mostly relies on cuts to dynamically-composed shots and staging for visual energy and he embraces the simplicity of stage sets for surreal settings. It suggests that Anderson could have been a real creative force had he continued. In another couple of years, fellow Broadway creator Busby Berekeley would put the camera on a crane and take Anderson’s approach to a new dimension by choreographing the camera along with the performers and pushing production design and the visual staging into even more graphically exciting and surreal directions.

It’s also a terrific time capsule that features popular acts of the era and preserves a style of stage performance that was already dying out when the film was released. In addition to the film debut of Bing Crosby (easily the stand-out member of the vocal group The Rhythm Boys), there’s the dance team of Marion Stadler and Don Rose doing the startling “Ragamuffin Romeo” number (a wildly gymnastic act that suggests a French Apache dance without the violent intent), singer Jeanie Lang whose kewpie doll looks and girlish voice suggests Clara Bow by way of Betty Boop, and The Russell Markert Girls, a chorus line that became The Radio City Rockettes. The finale “The Melting Pot of Jazz,” an utterly absurd and crazily lavish set piece, is a production number built around a giant bubbling cauldron as dancers and singers from European nations—Russian peasants, Scottish bagpipes, Irish singers, Spanish dancers, all embracing signature stereotypes—perform traditional numbers and are then lowered into the giant prop and stirred into American popular music. Yep, this story of jazz doesn’t include a single African or African-American contribution. Which I guess is fitting for a film that offers a white dance band leader as the King of Jazz in the age of Louis Armstrong, Fletcher Henderson, and Duke Ellington. That’s not a condemnation of the film, mind you. It’s really a blast and filled with surprises. But it is a reflection of the popular culture of its era, that popular culture is decidedly white.

The early two-strip Technicolor process has a limited color palette and the film is dominated by shades of teal and peach, which is worked into the production design by Anderson. While it looks strangely unreal, it is beautifully balanced on screen, worked through the sets and costumes and enhanced and punctuated with dynamic colored lighting.

For years incomplete and effectively unavailable, the film was restored in 2016 (a few missing interstitial segments are suggested with stills) and Criterion presents this version on Blu-ray and DVD, bringing this wonder to life with a creamy picture that looks painted on the screen in pastels.

The special edition discs feature with a worthy revue of supplements. Jazz and film critic Gary Giddins provides an informative introduction (16:15 minutes) and joins music and cultural critic Gene Seymour and musician and bandleader Vince Giordano for a commentary track. An interview with musician and pianist Michael Feinstein provides more context and insight to the music and popular culture of the era (19:14) and four video essays by authors and archivists James Layton and David Pierce chronicle the development and making of King of Jazz (the run about 45 minutes all together). They literally wrote the book on the film and offer a digest version of the production from roots to release.

There are also three short deleted scenes and an alternate opening-title sequence, the bonus short films All Americans (1929) featuring a version of the “Melting Pot” number restaged for the finale of King of Jazz and I Know Everybody and Everybody’s Racket (1933) featuring Paul Whiteman and His Orchestra, and two Oswald the Lucky Rabbit cartoons from 1930, featuring music and animation from King of Jazz, plus a booklet with an essay by Farran Smith Nehme.
King of Jazz (The Criterion Collection) [Blu-ray]

An Actor’s Revenge (Japan, 1963), Kon Ichikawa’s remake of a 1930s melodrama, reinvigorates a creaky old revenge tale with an almost experimental approach. It was produced to celebrate the 300th film of actor Kazuo Hasegawa, who starred in the original production, and he plays the same two roles he did in the original: kabuki star Yuki, a revered onnagata (a female impersonator) in an acclaimed Osaka kabuki troupe performing in Edo (which became Tokyo), and the thief Yamitaro, who observes his campaign. Yuki was orphaned at a young age and has come to Tokyo to take revenge on the three men—now rich and powerful—who drove his parents to suicide. His fame gives him access to their world and, constantly in character offstage as well as onstage with a mix of flirtatious and demure behavior, manipulates them while they attempt to woo him (men and women both fall for Yuki). The story also includes an underworld of thieves, working class theater fans, food riots, seduction, and innocents caught up in the fallout.

Though set in the 1830s, Ichikawa directs it with a dynamic, highly stylized approach, melding theatrical performances and expressionistic images with a script that leaps forward with rapid-fire exposition and breakneck momentum. It can be hard to follow the intricacies of the plot but Ichikawa puts the odysseys of the characters in the foreground and creates distinctive, unreal images in the studio that at times seem to be playing out on a stylized kabuki stage and at others in a heightened cinematic space. The eclectic soundtrack runs the gamut from jazzy to lushly romantic to discordant action scoring. It is gorgeous and compelling and constantly surprising and Ichikawa never made another film like it.

Criterion presents the film on Blu-ray and DVD mastered from a new 4K digital restoration. It’s a visually striking film and the image is bold and sharp and gorgeous. It features a 1999 interview with the director Kon Ichikawa, conducted by critic and filmmaker Yuki Mori for the Directors Guild of Japan (58 minutes), and a new interview with critic and film historian Tony Rayns (13:26).
An Actor’s Revenge (The Criterion Collection) [Blu-ray]

The Passion of Joan of Arc (France, 1928), Carl Dreyer’s silent symphony of faces, is unlike anything else in his career and hasn’t lost its power over time. Dreyer’s Joan, as portrayed by Renee Falconetti, is a suffering saint, her huge eyes pleading with the camera and filling with pain as her faith is tested by the threats, torments, and trials of the jury of elderly men (including Antonin Artaud). She’s both a saint and a teenage girl spiritually molested by a cabal of angry churchmen politics rather than dealing in faith. You can’t miss the Christ allegory as she gains solace in the sign of the cross, even when it’s merely a shadow thrown on the floor (and appropriately obliterated by one of the churchmen as he walks over to Joan).

It’s a film in close-up, with a camera that makes a study of it human subjects, coasts down the rows of frowning, pensive faces of dour churchmen, rocks like a pendulum as the crowds rise in anger, and lingers on delicate details. And the editing is different from every other film he made, cutting a montage heavy film using glances the way Eisenstein used clashing vectors and massive moving bodies, and cross-cutting with an energy that takes Griffith into the next century.

Previously on DVD from Criterion, it makes its Blu-ray debut from a new 2K restoration of the most complete version of the film in existence (from a Danish print discovered in 1985) presented at 24 frames per second. The new restoration from Gaumont is superb, bringing out detail in a visually stark movie that makes every moment more immediate. The contrasts are powerful and the images have a startling clarity. Presented with option of two soundtracks: Richard Einhorn’s beautiful oratorio “Voices of Light,” a modern work inspired by (but not actually written for) Dreyer’s film, and a new score by Will Gregory (of Goldfrapp) and Adrian Utley (Portishead). And alternate presentation of the film at 20 fps features original Danish subtitles and a score composed and performed by pianist Mie Yanashita.

Carried over from the earlier DVD is commentary by film scholar Casper Tybjerg and an archive of images exploring the production design. New to this edition are a video essay by Tybjerg exploring the debate over the film’s frame rate, a featurette on the various versions of the film over the years, an interview with composer Richard Einhorn, a conversation between composers Will Gregory and Adrian Utley, an archival interview from 1995 with actor Renée Falconetti’s daughter and biographer, Hélène Falconetti, plus a booklet with an essay by critic Mark Le Fanu, a 1929 director’s statement by Carl Theodor Dreyer, and the full libretto for “Voices of Light.”
The Passion of Joan of Arc (The Criterion Collection) [Blu-ray]

The Passion of Joan of Arc (The Criterion Collection) [DVD]