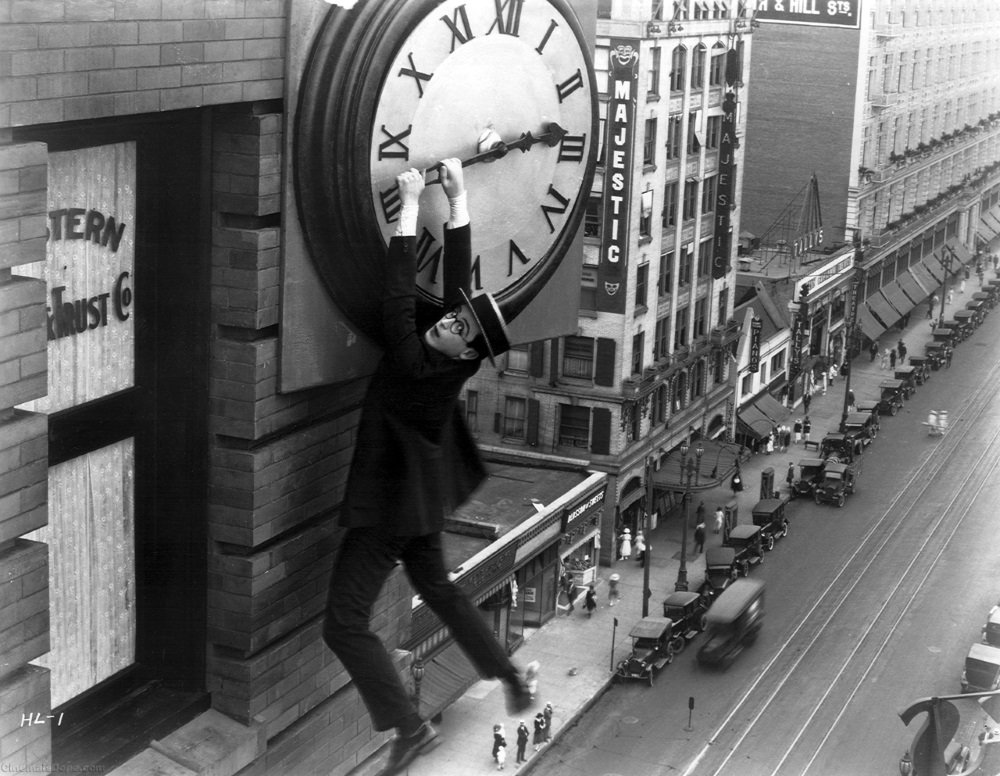 Safety Last (1923) is the most famous of Harold Lloyd’s silent comedies and first of his “thrill pictures,” films that he built around slapstick ingenuity in the midst of daredevil stunts. This one has a doozy: Lloyd scales an office building in downtown Los Angeles, fumbling and fighting with obstacles the entire way. The image of Harold Lloyd hanging from the hands of a clock high above the Los Angeles city streets may be the single most iconic shot that says “silent movies” and “slapstick comedy” to the general public without further explanation.

The bright, often sly young man of the jazz age trying to carve out his piece of the American dream, Harold Lloyd was the modern man of the three greats of silent slapstick comedy. Where Charlie Chaplin and Buster Keaton created characters that were always out of step with the world, Lloyd, with his horn-rimmed glasses and Horatio Alger spirit, was the everyman trying to make his way in the world and win the girl.

In Safety Last, Lloyd plays the small town swell trying to make good in the big city, putting on a show of success for his girl back home while scraping by at a department store fabrics counter, still waiting for his big break. He’s a prankster, a wise guy, and a dreamer, and of course he ends up taking the place of his hired daredevil when his publicity stunt hits a snag and the ambitious young man turns human fly and scales a skyscraper to escape the clutches of a street cop who has too often been the victim of Lloyd’s practical jokes. And yes, apart from the long shots featuring a stuntman, that’s Lloyd himself scrambling up the bricks and cornices, thanks to a mix of nervy stuntsmanship and ingenious location shooting on platforms built on the rooftops of Los Angeles buildings, chosen to bring him every higher with each successive scene. There is no rear projection here and the superb photography puts him against the very real bustle of the city in the background.

Forgotten in the cascade of sight gags set against the danger of the climb is the witty workplace comedy that opens the film. Lloyd slips into the role of the harried working man, forever ducking the wrath of the pinched floorwalker while trying to keep up the pretense of success when his girl comes out for a visit, or simply trying to survive the madhouse of a department store sale, a near-riot of matronly women giving pro wrestling a run for its money.

Today the cults of Chaplin and Keaton overshadow Lloyd but in his day he was just as popular and even more financially successful. He was the embodiment of his era, a resolutely contemporary man, dressed for success, fast thinking and, above all, ambitious. If he had to cut a few corners or duck responsibility for another mess, that was the price of success.

Watch it on Hulu.

and to own on Criterion disc.
Safety Last! (Criterion Collection) [DVD]