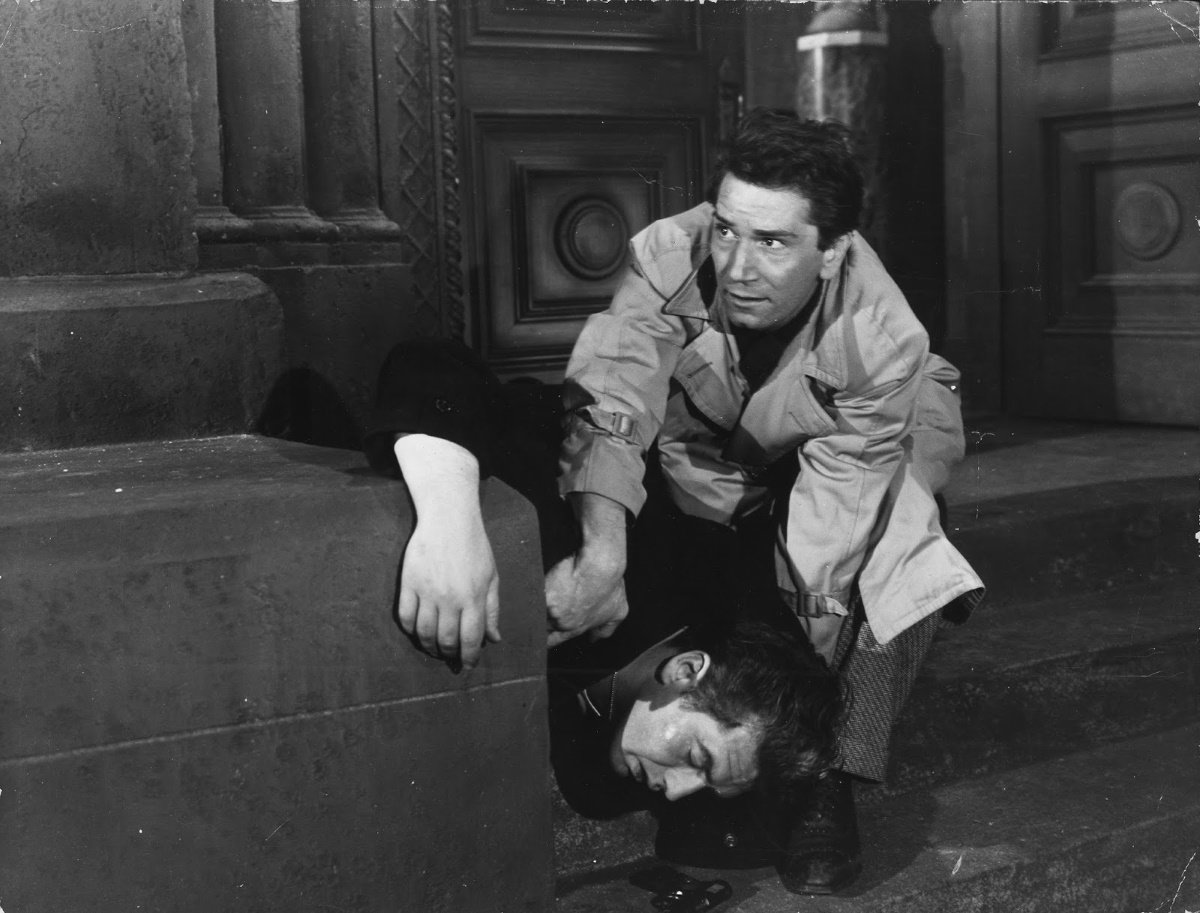 Robert Siodmak made more film noirs than any other director. It’s not like he set out to do so—they were considered crime thrillers and murder dramas by the studios and the term film noir was given to the shadowy subset long after Siodmak stopped making them—but he helped define the genre (or the style and attitude, if you prefer) in its glory days. Cry of the City (1948) is one of his darkest film noirs, a gangster drama seeped in shadows, corruption, and psychosis.

Victor Mature stars as Lt. Candella, an Italian-American police detective who takes the pursuit of small-time gangster Martin Rome (Richard Conte) personally. They grew up together in Little Italy and Candella doesn’t buy Martin’s excuses of poverty and culture for turning to a life of crime, not with such salt-of-the-Earth parents who treat Candella almost like family. More to the point, he hates how he’s become an outlaw hero to the kids in the neighborhood and especially Martin’s adoring kid brother, Tony (Tommy Cook).

Victor Mature gives one of his best performances here, bringing a sense of gravity to a dour and humorless role, the martyr fighting the good fight in a neighborhood that has turned its back on him. Conte gets the more colorful part, flashing a grin as the wise guy hood spreading the message that crime pays and pays well, and his staccato patter has a singsong confidence that slips into arrogance. He’s the classic noir gangster, a mercenary narcissist who fools himself into thinking he has a code and then breaks it when he gets desperate.

Siodmak shoots much of it on location in New York. The urban atmosphere of city traffic and the scuffed and worn authenticity of real storefronts and sidewalks gives the film a charge of realism yet he still manages to get those studio shadows and rain-slicked streets into shot after shot, creating a nocturnal underworld within the urban jungle of the city.

This is the classic noir world of corruption and betrayal and desperation. Conte’s increasingly jittery performance, his smarmy confidence giving way to panic and predatory self-interest, meets Mature’s stoic stillness, the stocky Mature towering over the smaller, gnarled-in-pain Conte like a judgment. If there’s justice in this film, it’s pitiless and unforgiving, and no studio-mandated happy ending can sweep away the doom.

Shelley Winters has as small but splashy role as another of her brassy dames, loyal and not too bright, Hope Emerson is even more memorable as a hatchet-faced masseuse ready to choke the life out of Conte, and Fred Clark, Berry Kroeger, and Debra Paget costar.

The Blu-ray from Kino is mastered from a strong transfer of a clean, well-preserved print. It features commentary by film noir historian Eddie Muller’s, whose encyclopedic knowledge of character actors get a workout.

The DVD from 20th Century Fox Cinema Archive is mastered from a good print with minor scuffing but no damage. It is a manufacture-on-demand disc with no supplements.