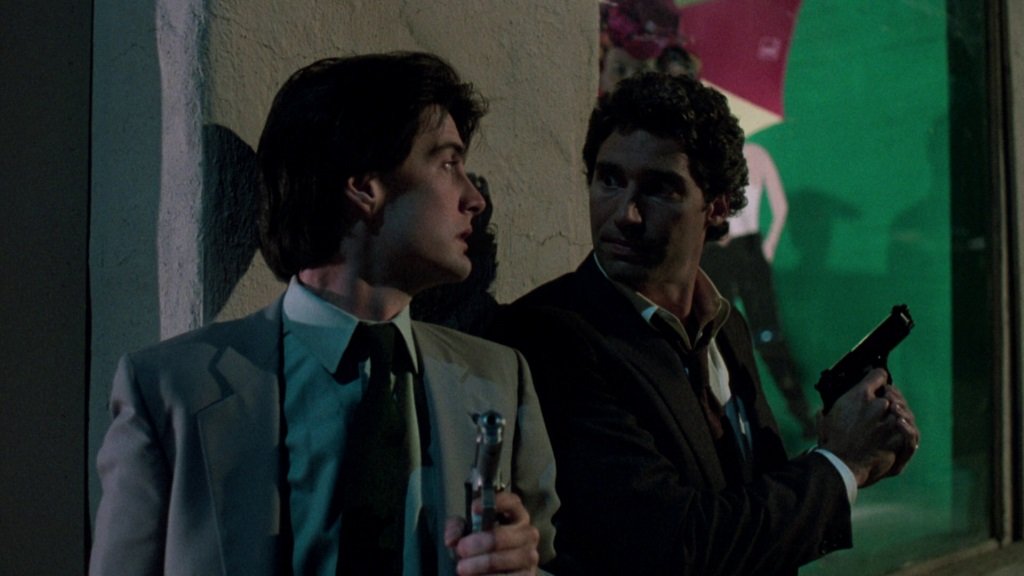 Basket Case (1982), the debut feature of filmmaker Frank Henenlotter, is a gruesome little cult indie-horror drama of brotherly love and righteous vengeance shot on location in the seedier sections of New York City.

Kevin VanHentenryck shuffles through the low budget exercise in grotesquery and gore as Duane, the “normal” brother sent by his deformed, formerly-conjoined twin Belial to take revenge on the doctors who separated the two and left the blobby, grotesquely misshapen brother to die. Most of the effects are shrewdly just off screen, with spurts of blood and gnarly hand dragging the character out of view to feed our imaginations, and a few bloody corpses left in the aftermath (an exception is a pre-Freddy multiple impalement with scalpels).

Henenlotter was reared on the cheap horror films of Herschell Gordon Lewis and other independent exploitation directors of the 1960s and 1970s and this is in many ways his tribute to the grindhouse horror films he loves, a low-budget monster movie with a creative twists and an embrace of the grotesque. The monster effects, a mix of puppets, models, and stop-motion animation, may look amateur today but there’s a loving B-movie attitude and a genuine sense of character and tragedy to the misshapen, fleshy, snaggle-toothed Belial, who sees Duane’s growing guilt and desire to connect to other people (notably a girl he’s fallen for) as a betrayal of their bond. A cult classic with an inspired twist on Cain and Abel.

Newly remastered from a 4k restoration produced by the Museum of Modern Art, the Blu-ray debut features new commentary recorded for this release by director Frank Henenlotter and actor Kevin VanHentenryck, the new featurette “Basket Case 3 1/2: An Interview with Duane Bradley” featuring VanHentenryck and directed by Henenlotter, and the feature-length documentary “What’s in the Basket?,” which covers the entire trilogy. It also carries over the commentary recorded for the earlier DVD release and features new and archival interviews and featurettes.

Japanese filmmaker Miike Takashi made his reputation with a string of crime movies with wild twists and extreme acts of violence. His twisted gangster tale Ichi the Killer (Japan, 2001) is one of his most extreme films, a Niagara Falls of gushing blood cinema and a depraved, demented exercise in excess.

Tadanobu Asano stars as Kakihara, a lasciviously sadistic mob enforcer with a mouth slashed wide from ear to ear (the bottom half of his face is held together by hoops). He looks as demonically wicked as he acts, embarking a reign of torture and gory violence to find his missing mentor and pausing only to feed his masochistic need to be beaten and brutally abused. Meanwhile mad maniac Ichi (Nao Omori, looking more like a morose sad sack than serial killer) is spraying a bloody swath through town, leaving little more than flesh and blood caked on the walls where his victims once stood. Like many of Miike’s films, this is indulgent, overlong and more impressively calculated than dramatically motivated. Which is exactly what his fans love about him: Kakihara hangs a rival leader from fishhooks pierced through his flesh, sinks spikes through his cheeks, and douses him in boiling oil, and that’s just the first few minutes. Limbs are pulled from sockets (leaving meaty strands hanging out of the open wounds), a tag team of twin torturers slice and dice a prostitute, and numerous torsos spill forth guts and gore and intestines across the screen. It’s a cult classic of extreme cinema.

When actor Max Baer found himself not just unemployed but unemployable after playing Jethro for nine years on The Beverly Hillbillies, he put everything into a make-or-break film. Baer wrote the story, co-wrote the script, produced, and starred in Macon County Line (1974), a low-budget, independently-made thriller set in the 1950s Jim Crow South.

Though the opening credits claim it is based on a true story, this is a purely fictional drama about two brothers (Alan Vint and Jesse Vint) from Chicago on a road trip through the south before they report to basic training, a pair of criminal drifters (Timothy Scott and James Gammon) who recall the criminals of In Cold Blood, and a deputy sheriff (Baer) who mistakenly targets them on a rage-fueled mission of revenge. The film seems to meander through its first hour, establishing the boys as reckless but mostly harmless troublemakers and petty crooks (they rob a hooker and run out on a diner check) and the deputy as a loving husband and father and an unapologetic bigot who hassles the boys when their car breaks down and gently explains his support for racial segregation to his son (Leif Garret) as a life lesson. Then director Richard Compton abruptly shifts into high gear to create a riveting, adrenaline-boosted thriller in its final act.

It comes out of the drive-in culture of fifties nostalgia and southern injustice redneck action movies but its nuanced portrait of its openly racist police deputy and the effective direction of the nightmarish finale puts it a cut above the rest of the redneckspoitation pack. It was a huge hit in 1974 and has become a cult film and an interesting piece of seventies exploitation filmmaking.

The 1980s was a surprisingly good decade for low-budget, high-concept films that merged and mixed genres. The Hidden (1987), a mix of body-snatcher science fiction, crime thriller, and offbeat buddy cop drama, is one of the better films to come out of this cinematic culture. Kyle MacLachlan (fresh off Blue Velvet) is a touch odd and socially out of step as a Seattle FBI agent who teams with a New York homicide cop (Michael Nouri) to stop a sociopathic thief and impulse killer with a thing for fast cars and driving hard rock. The problem is that when their suspect dies (it takes a high-speed wreck and dozens of gunshots just to knock him down) the spree is taken up by another guy with no previous criminal record. And then another. It turns out both the criminal and the oddball, obsessive agent are actually aliens in human bodies.

MacLachlan has some comic moments but exudes compassion and emotional pain under his well-played awkwardness while a series of actors (beginning with Chris Mulkey and moving on through Claudia Christian, Ed O’Ross, and even a dog) deliver a terrific collective performance as the id-driven villain through shared body language. They all communicate a sense of primal enjoyment in their violent sprees and the sensory pleasures of the temporary bodies (well, maybe not the dog so much, but it does mimic the body language quite effectively). Director Jack Sholder serves the script well with his direction of actors, the punchy drive of the careening car chases and escalating gunfights (which include a bazooka and a flamethrower before the film is over), and the warmth of Nouri’s family scenes and MacLachlan’s concern for and connection with his human partner. It’s an entertaining film with terrific action and a satisfying ending.

The supplements of the Warner Archive Blu-ray are carried over from the previous DVD release: commentary by director Jack Sholder with fellow director Tim Hunter and a short reel of special effects test footage narrated by Kevin Yeagher.