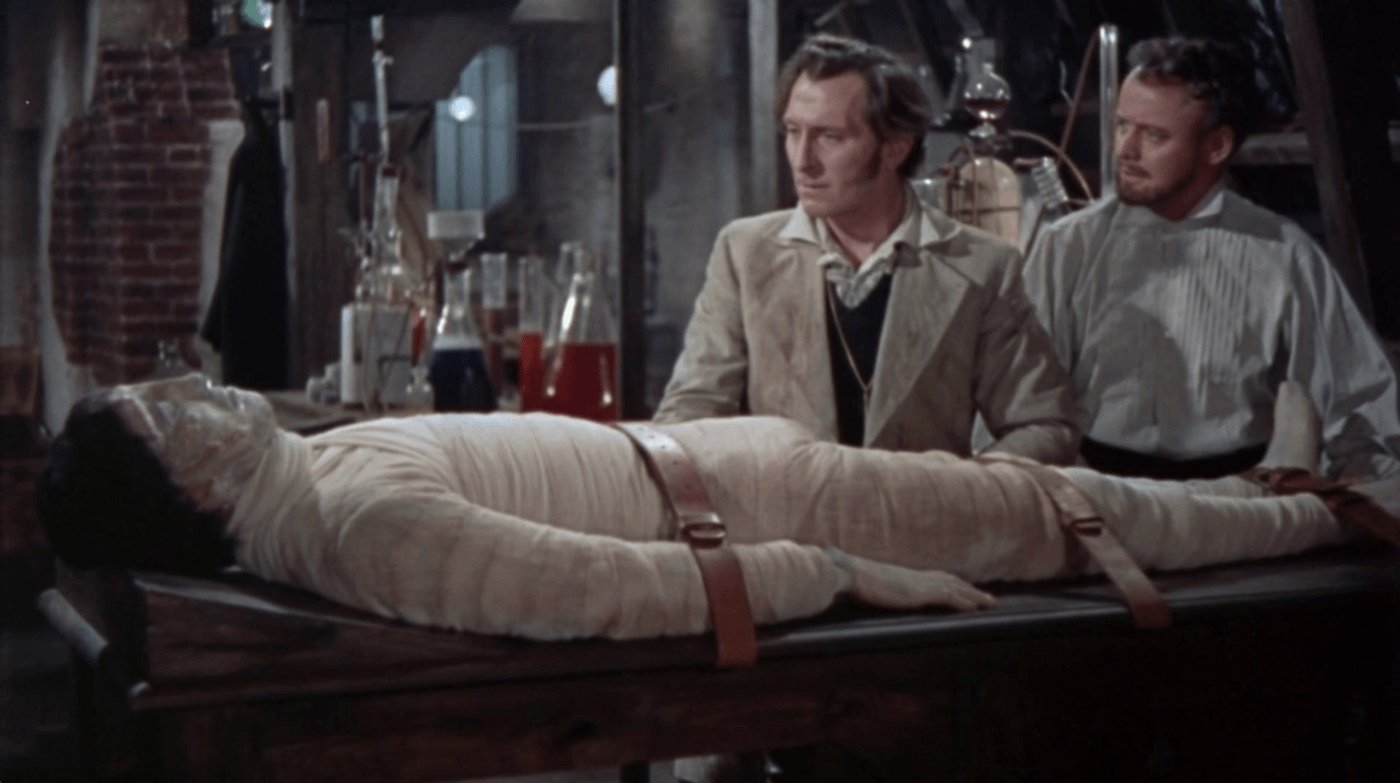 Britain’s Hammer Studios had been making films for decades before they suddenly redefined themselves with this lurid remake of the Universal Studios horror classic. Prohibited by Universal from copying their blocky make-up (and their script for that matter), Hammer returned to Mary Shelley’s novel for inspiration for The Curse of Frankenstein (1957)… and then went its own direction.

Peter Cushing plays Dr. Frankenstein as the rational scientist turned cold-blooded criminal in his campaign to discover the secret of life, committing murder to further his ends, or to remove an inconvenient mistress. Christopher Lee is the pitiable creature, a terrified behemoth more innocent newborn than malevolent monster. His pale, pallid, grotesquely scarred face was so thickly applied to that he emotes almost exclusively with his eyes and his awkward, stumbling gestures. The not-so-good Dr. Frankenstein is the true monster, a ruthless scientist whose rejection of superstition extends to all moral considerations. The doctor’s chilling lack of remorse becomes the key to Hammer’s consistently high level sequels, but none of them equal the cool calculation Cushing delivers here with his hard stares and chilly smile.

Shot in blood red color by Hammer stalwart Terence Fisher and set in a Gothic world combining Victorian Britain with old-world Bavaria, it tests the tensions between science and faith, morality and megalomania. The stylish, often salacious film became Hammer’s biggest success to date, made horror stars out of the classically trained Cushing and Lee, and transformed the B studio into the Hammer we know and love today: the house that dripped blood. The Horror of Dracula followed immediately, reuniting the winning team of Cushing and Lee, and Cushing returned in four of six Frankenstein sequels.

, iTunes, GooglePlay and/or other services. Availability may vary by service.
The Curse of Frankenstein [DVD]

TCM Greatest Classic Film Collection: Hammer Horror (Horror of Dracula / Dracula Has Risen from the Grave / The Curse of Frankenstein / Frankenstein Must Be Destroyed) (DVD)