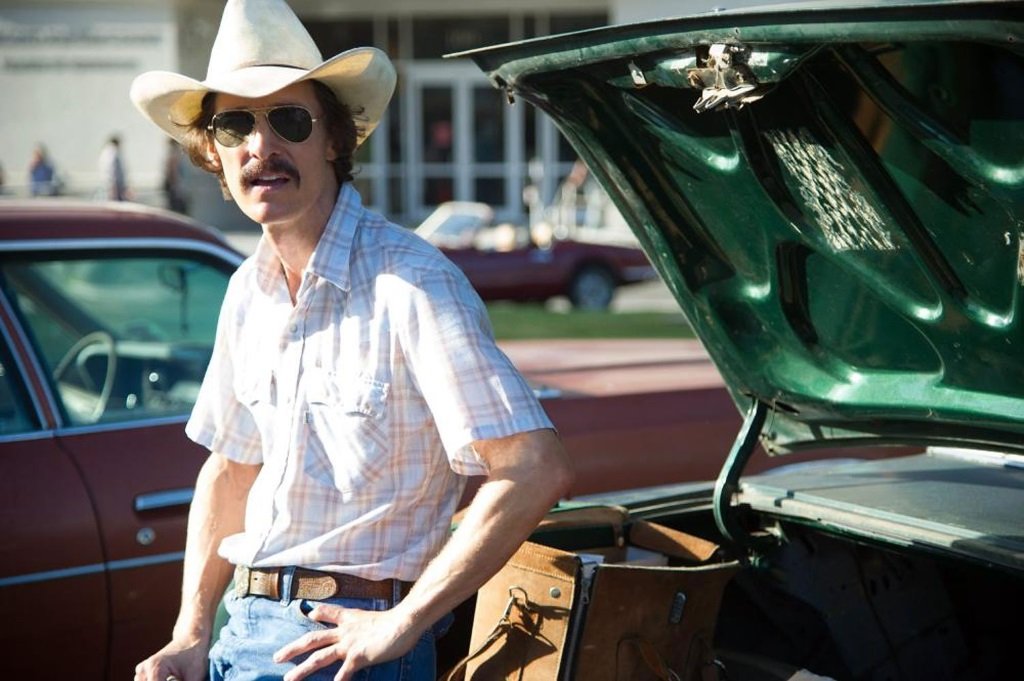 Matthew McConaughey is so good in Dallas Buyers Club (2013) that he shows up the limitations of this drama based on true events. McConaughey lost a lot weight to play Ron Woodroof, a Texas electrician and rodeo rider in the late 1980s whose reckless lifestyle leaves him with AIDS, a diagnosis this redneck homophobe denies vehemently before educating himself on the disease and the dangers of the early treatments.

It’s a story of outcasts and mavericks who pursue an alternative approach to fighting AIDS outside of the oversight and restrictions of the FDA and the AMA, or at least that’s how it presents itself. That it succeeds with so many audiences is testament to the way director Jean-Marc Vallée puts us in Ron’s perspective as his body breaks down, and to the performances by McConaughey and Jared Leto.

McConaughey plays up his drawling charm without losing the con man and bigot under the denial and self-destruction of Ron, and his turnaround isn’t a matter of evolution so much as survival. Leto is equally good as Rayon, a transsexual in the midst of reassignment regimen who teams up with Ron to set up the “buyers club” to bring medication in from Mexico. They both earned Academy Awards and Golden Globe wins for their work.

The rest of the cast of characters are just there to prop up the script’s narrative needs. Jennifer Garner’s sympathetic doctor ends up in the generic supportive girlfriend role to the unlikely activist Ron (even though she’s not really his girlfriend) and Denis O’Hare’s establishment doctor is so blindly obedient to the drug companies that he refuses to look at studies on the side effects and toxic properties of AZT.

The film takes Ron’s side unilaterally in its portrait of the FDA, the medical profession, and big pharma as a cabal stifling innovation and suppressing contradictory research on the “wonder drug” AZT. There is probably an interesting story on the politics and medical controversy over the drug to be explored, but it’s nowhere to be found in this script, which nonetheless received a nomination for Original Screenplay. The film earned six nominations in all, including Best Film, and in its way is responsible for one of the strangest Oscar acceptance speeches in the history of the awards show.

Add to My Watchlist on Peacock

The Blu-ray and DVD editions from Universal Studios Home Entertainment include the featurette “A Look Inside Dallas Buyers Club” and deleted scenes. The Blu-ray also includes a bonus DVD and Ultraviolet Digital HD copies of the film (the digital code may be expired).