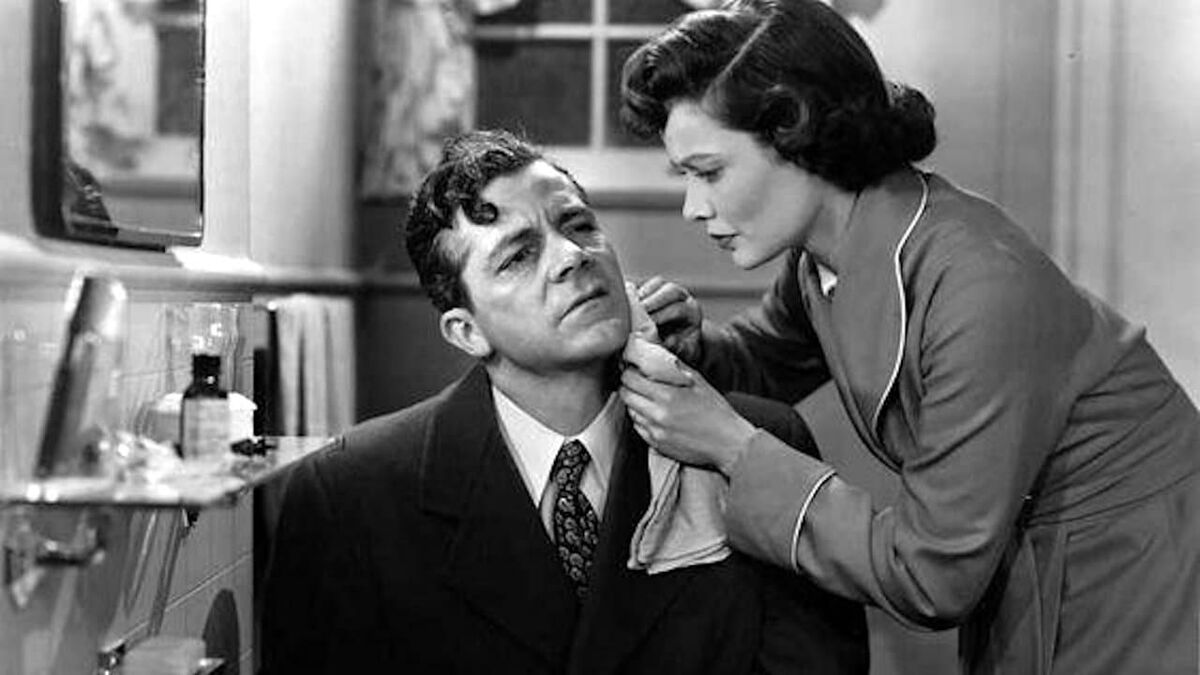 Otto Preminger’s Where the Sidewalk Ends (1950) reunites the stars from his breakthrough film Laura (1944), the most elegant of early film noirs, for a more streetwise cop drama with a bare-knuckle attitude.

Dana Andrews is Det. Mark Dixon, an angrier version of his Laura character (also a police detective named Mark) who takes out his resentment for his criminal father on the hoodlums, thieves, and gangsters he sweeps off the streets. When he accidentally kills a suspect—a former war hero who has already been framed for murder by smarmy crime boss Tommy Scalise (Gary Merrill)—and covers up the crime, Mark’s unstable moral high ground gives way. Gene Tierney is the wife of Mark’s victim, a clothing model who has separated from the sleazy guy and moved in with her dad (Tom Tully), and guilt starts eating Mark alive when his actions throw suspicion on Tierney’s protective father.

Andrews was one of Preminger’s favorite actors for that ability to walk the tightrope between American forthrightness and over-the-edge darkness. That chiseled face made him convincing as both a working class cop and a master of industry and paired nicely with Tierney’s sculptured features: scar tissue and smooth glamour brought together by violence.

The script, written by Ben Hecht, plays with the idea that it takes the overly-passionate (and borderline psychotic?) cops like Mark to take on Scalise. His new boss, a by-the-book commander played by Karl Malden, is committed but lacks imagination and insight and Merrill’s Scalise is certainly imaginative, or at the very least opportunistic. Standing out in the supporting cast is Craig Stevens, a decade away from Peter Gunn, sweating cheap, desperate charm as Tierney’s heel of a husband and veteran character actress Ruth Donnelly as a diner matron with a sharp tongue and a warm heart. Her affection of Mark helps us see the better angels of his nature.

Preminger shoots largely on studio sets, the better to sculpt his version of night in the city, and sets the climax in a parking garage with a car elevator that he uses to superb effect. All that heavy machinery becomes something akin to weaponry under noir conditions.

Released on DVD from Fox Video in 2005 and Blu-ray by Twilight Time (in a limited edition, now out of print). It’s a superb Blu-ray debut, with a sharp image and rich contrasts. Film noir historian Eddie Muller’s commentary, originally recorded for the DVD, is carried over for this edition, and as with all Twilight Time releases, it features an isolated score and a booklet with an essay by Julie Kirgo, and is limited to 3000 copies.