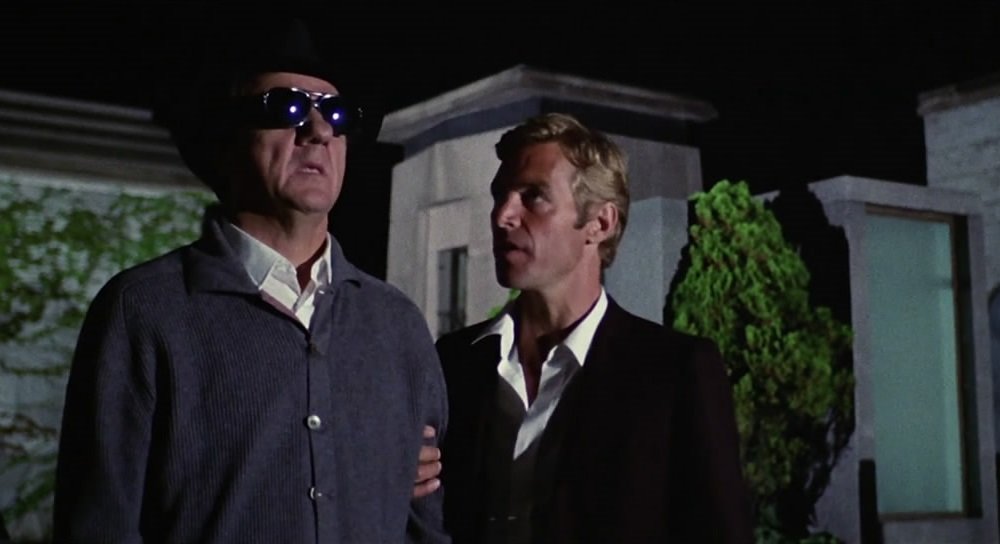 The Cat O’Nine Tails (Italy, 1971), Dario Argento’s second feature, follows up his directorial debut The Bird With the Crystal Plumage in genre, style and “animal” theme (stretched into a trilogy with Four Flies on Gray Velvet). In Bird, Argento explores, pushes at, and plays with the mechanics of suspense and murder mystery spectacle in a psychodrama thriller (an uncredited adaptation of Fredric Brown’s novel The Screaming Mimi). Developed with novelist and screenwriter Bryan Edgar Wallace, one of the godfathers of the German “krimi” genre of gruesome body-count murder mysteries, flamboyant killers and creative murders, with stylistic inspiration from Mario Bava’s elegant dances of death. The Cat O’Nine Tales continues down the same twin paths, but this time he also starts to play with the conventions and tropes of the genre, not defying or overturning them, simply bouncing them around with buoyant sense of play as he turns them into opportunities for style.

James Franciscus (under a blonde dye job) is a reporter chasing down a mysterious break-in at a genetics lab, where nothing was apparently stolen, and Karl Malden is a blind man who overhears a conversation that appears to tie in to the mystery. Their meeting is a narrative contrivance to team them up (what reporter rushing to a scoop would take the time to explain what’s going on to a blind bystander?), the hot-shot reporter with all-access to crime scenes and police officials and the retired journalist, blinded years ago, who spends his days caring for an orphan and solving puzzles. Malden comes off as the cheerfully amateur detective of British cozies, smiling as he checks off the clues and bounces ideas off of Franciscus, himself a fairly animated and buoyant presence. Only when the little girl is kidnapped does Malden falter, the fun tipped into danger and the stakes become personal.

There’s nothing unique or daring in this handsome CinemaScope production, and little of the bravura flights of style that will define his later, more flamboyant exercises in color and camera movement and the fine art of murder. Even the spare score by Ennio Morricone looks back to traditional Italian horror, which Argento left behind for the pounding prog-rock scores of his subsequent films. But he has a flair for juicing up characters with personality quirk (not subtly or even all that convincingly, but with a certain sense of fun) and he keeps the film moving ahead or bouncing around characters as they dole out the exposition and a mystery that twists and turns with almost arbitrary direction.

The beginnings of his trademark style can be glimpsed in the POV sequences of the killer at work, begun with a close-up of the eyes so tight all you see is iris and whites and continuing through the stalking and dispatching of characters intercut with the fragments of murder mosaics, the most obvious evidence of his debt to Hitchcock. The shower scene from Psycho is his touchstone, only Argento’s mini-symphonies of murder aren’t about fooling viewers into thinking they’ve seen more than is actually onscreen. He uses the discreet shots to foreground the assault on the flesh and the shedding of blood and impress audiences with his spectacle. A body pushed in front of a speeding train is punctuated with a close-up of the engine colliding with the skull and the freefall of another victim is just the prologue to the desperate grasping for purchase before the crush of impact, complete with the crumple of the body. It’s not exactly sadistic—Argento is like Malden’s character in the movie, delighting in the design and execution of his set pieces like a puzzle—and he doesn’t revel in their suffering. It’s all rather dispassionate, a matter of cinematic engineering.

For all of Argento’s virtuosity, he’s no master of suspense or even tension. He’s a showman and a stylist and his set pieces are pulp art pieces, with a camera that shifts between subjective killer POV (picked up as a staple of the American slasher explosion of the late seventies and eighties) and the technician’s eye for killer detail. He sweeps us into the process as spectators to the art of murder and he pushes his art further in his subsequent films.

, iTunes, GooglePlay and/or other services. Availability may vary by service.
The Cat O’ Nine Tails [Blu-ray]

On Blu-ray and DVD from Blue Underground with the 14-minute interview featurette “Tales of the Cat” with Argento, co-writer Dardanno Sacchetti and composer Ennio Morricone (from 2006) and archival radio interviews with stars James Franciscus and Karl Malden (purely promotional and about eight minutes apiece).