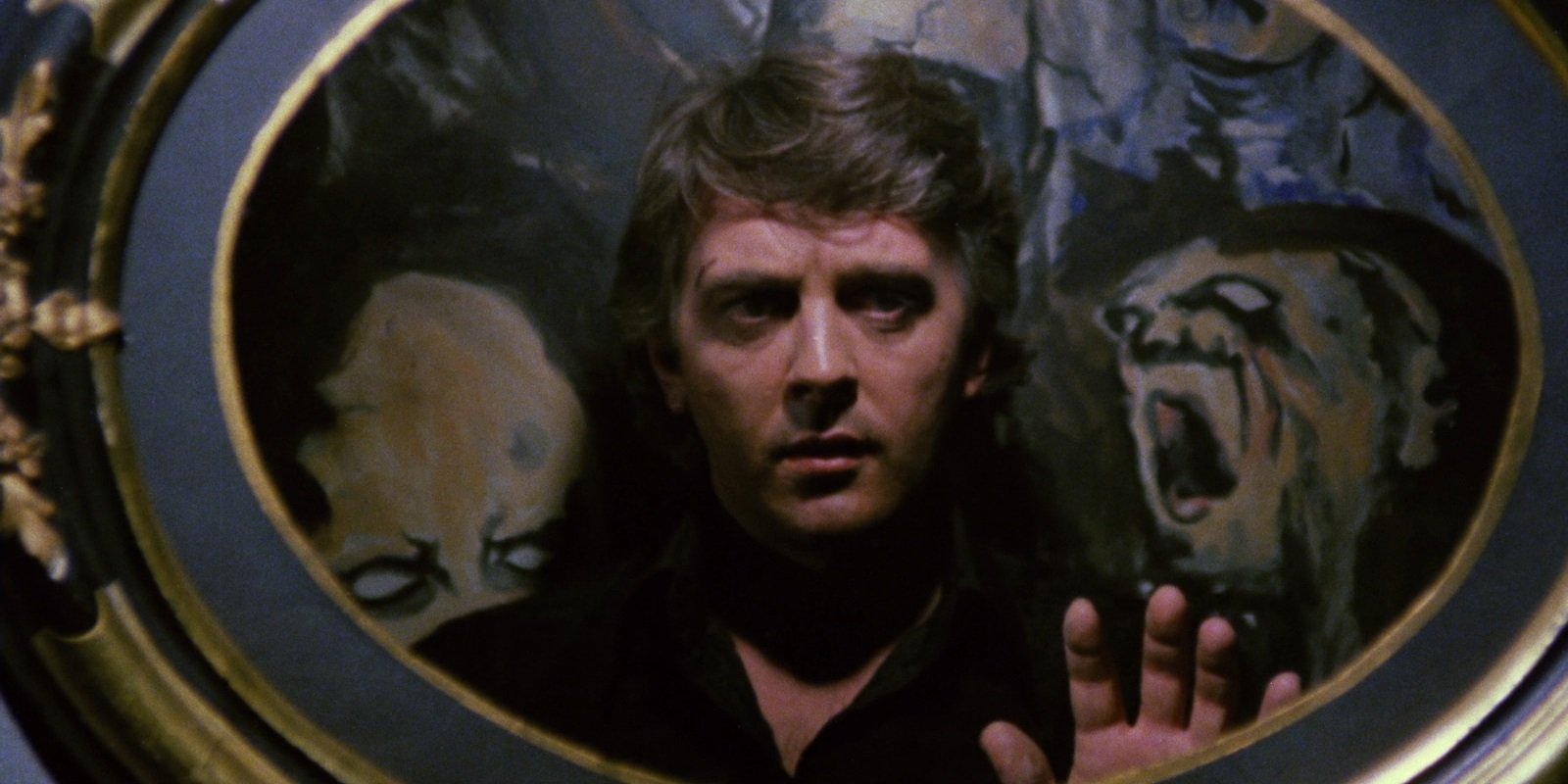 Deep Red (Profundo Rosso, Italy, 1975), Dario Argento’s fifth film and his fourth giallo (his non-horror interim film Le Cinque giornate remains unreleased in the U.S.), stars David Hemmings as an American jazz pianist and music teacher in Italy. He witnesses a bloody murder in an apartment window and rushes up from the street to find the victim (French actress Macha Méril, of Godard’s Une femme mariée) dead, the killer gone and a clue of sorts in the back of his mind: there’s something missing from the scene of the crime, he’s sure, but just what that elusive detail is remains a foggy memory.

That sliver of indistinct detail haunting the mind of a witness to murder is right out of Argento’s debut The Bird With the Crystal Plumage (reviewed on Stream On Demand here) and, as in his earlier films, the ostensible mystery is a modern psychodrama thriller (rooted in the childhood murder of the pre-credits sequence) framed by a detective story. Hemmings turns amateur sleuth driven (for no reason but to move the story along) to investigate on his own, though he gets a little help from a kooky Italian journalist (Daria Nicolodi, Argento’s wife and co-writer on the subsequent Suspiria) who drives him around in a rickety car that provides a smattering of gags. Meanwhile the murders continue with a sadistic edge this time and Argento tops it off with two accidental deaths built out of chains of cause and effect (and a modicum of suspension of disbelief) that surely gave ideas to the creators of the Final Destination films. Not simply killed, these folks are punished as if it’s personal, not a matter of sadism so much as an act of retribution. And again, Argento isn’t asking us to take satisfaction or pleasure in the killings, merely to admire his work.

There’s not a lot of narrative logic—the whole thing begins with a conference of telepaths and psychics and moves into the realm of folklore and local legends—but the mood and atmosphere show more attention than ever, from the nighttime street scenes of monolithic buildings and looming statues over streets bereft of crowds to an abandoned house haunted by blood red colors of past horrors. This house may not be literally haunted, but it manages to threaten just the same. His camera and his eye for unsettling imagery is more sure than ever and his construction of murder set pieces from isolated fragments of extreme close-ups even more effective, communicating the helplessness of victims under attack by an unidentified killer seen only as gloves, hat, and anonymous coat wrapped tight. The score, by Giorgio Gaslini and Goblin, is synthesizer-driven prog rock that, kitschiness aside, sets a mood of gothic flamboyance with a modern sensibility while driving the film forward.

Also adding to the atmosphere is the unique Italian production reality of MOS: shooting without recording live sound and building the soundtrack completely in the recording studio, from looping voices to layering foley effects. By Deep Red, Argento has become quite gifted at orchestrating his soundtracks like music, balancing a sense of “realism” in sonic atmosphere with an audio expressionism that isolates and shapes audio elements the way his camerawork and color schemes transform the visuals. It’s hardly revolutionary, mind you, and nothing American directors don’t do, but the same Italian sound studio style that made the spaghetti westerns such a sonically spare world gives Argento the ability to create audio worlds that are just a bit off from American soundtracks, yet familiar enough not to revel in its artificiality. The effect is a stark, subjective audio atmosphere where a few key sound effects dominate. As sculpted by Argento, the soundscape is as distinctive as his visuals.

There are two versions available on Blu-ray and DVD. The extended Italian Deep Red: The Director’s Cut runs over two hours (2:07, in fact) and is full of unnecessary exposition (plot was never Argento’s strong suit). Deep Red: Export Theatrical Cut is twenty-minutes shorter than the Italian director’s cut but more satisfying: less padding, fewer diversions (including less of Nicolodi’s fumbling comic relief, which is made more awkward in the English dubbing) and more forward momentum. Both have been released individually by Blue Underground on DVD. They’ve both been newly remastered from 4K scans of the original negatives of each version for a two-disc special edition from Arrow, which presents both films with choice of Italian and English language soundtracks (some sections of the Director’s Cut resort to Italian soundtrack with subtitles).

New to Arrow’s edition is a brief introduction by composer Claudio Simonetti (under 30 seconds), commentary by Thomas Rostock and the visual essay “Profundo Giallo” by Michael Mackenzie, a fine production that explores Argento’s themes and imagery and runs about 33 minutes. There are also four archival supplements carried over from previous disc releases: the interview featurettes “Rosso Recollections” (12:26) with Dario Argento, “The Lady in Red” (18:47) with actress Daria Nicolodi, and “Music to Murder For!” (14:07) with composer Claudio Simonetti, and “Profondo Rosso: From Celluloid to Shop” (14:30), a guided tour through the Profondo Rosso shop in Rome conducted by filmmaker Luigi Cozzi. These are all on Disc One with The Director’s Cut along with a trailer for the Italian release. The second disc includes the Export Theatrical Cut and accompanying trailer. There are also a mini-poster, lobby card reproductions, and limited edition booklet, plus reversible artwork.