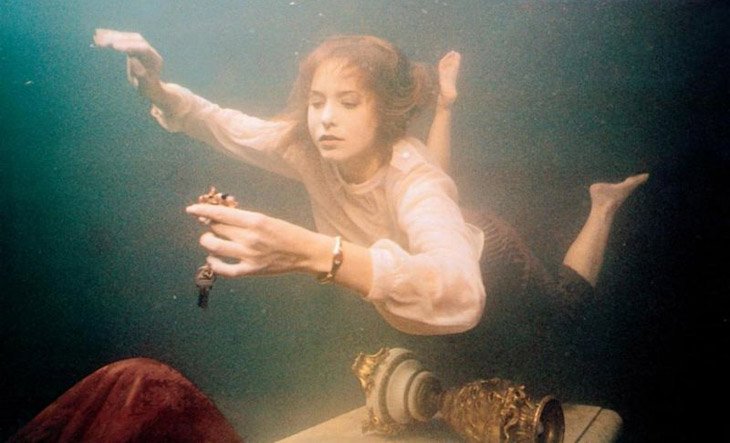 Inferno (Italy, 1980), the second film in Dario Argento’s “Three Mothers” trilogy, is ostensibly a sequel to Suspiria, though it has no characters or storylines in common with Dario Argento’s giallo classic. What it shares is style and sensibility and dreamy, unreal imagery.

Irene Miracle appears to be our heroine, a New York girl captivated by an ancient text that inspires her to search for one of the mythical Mater Tenebrarum (the “mother of shadows” and the cruelest of them all) in her own apartment building (a truly magnificent old construct incongruously dropped into Argento’s stylized recreation of New York City). Leigh McCloskey is her brother, a music student in Rome who returns home to find her missing in a world touched by malevolent magic, which transforms everyday locations into hostile environments of spikes, splinters, knife edges and broken glass, all conjured to pierce flesh, draw blood and take lives.

Inferno is a mystery with the logic of a dream, a visual symphony of color, camerawork and characters following impulse over logic, as if driven by some primal instinct, or drawn by the power of inexplicable supernatural forces. Why else would a seemingly rational girl take a midnight swim through an underwater ballroom revealed through a crack in a creepy cellar? This horror has nothing to do with reason and everything to do with emotion and movement and color.

Argento, who directs from his own original story and screenplay, populates the film with enigmatic suspects, including a whole apartment building of eccentrics and recluses, among them Alida Valli, who appeared in Suspiria but takes on a completely unrelated role here, and Argento regular (and ex-partner) Daria Nicolodi. Keyboard virtuoso and synthesizer rock pioneer Keith Emerson (of Emerson, Lake and Palmer) contributes a vivid score, which ping-pongs between ominous orchestral arrangements and pounding synthesizer solos. And Argento sculpts the unreality of the world with his distinctive lighting: sets and locations bathed in various pools of reds, blues, greens and purples, none of it “motivated” yet all of it creating a world where the supernatural and the inexplicable rule.

, iTunes, GooglePlay and/or other services. Availability may vary by service.
Inferno [Blu-ray]

Remastered by Blue Underground DVD and Blu-ray special edition releases. This is one of Argento’s most visually robust and vivid film, with pools of saturated color that seem to glow from within, and this disc delivers the intensity of the color palette in the crisp, sharp images that cast a spell over the viewer. Along with an eight-minute interview with Dario Argento and Lamberto Bava carried over from the previous disc are two new interviews with the stars: “Art and Alchemy with Leigh McCloskey” and “Reflections of Rose with Irene Miracle,” about 15 minutes apiece and presented in HD on Blu-ray.