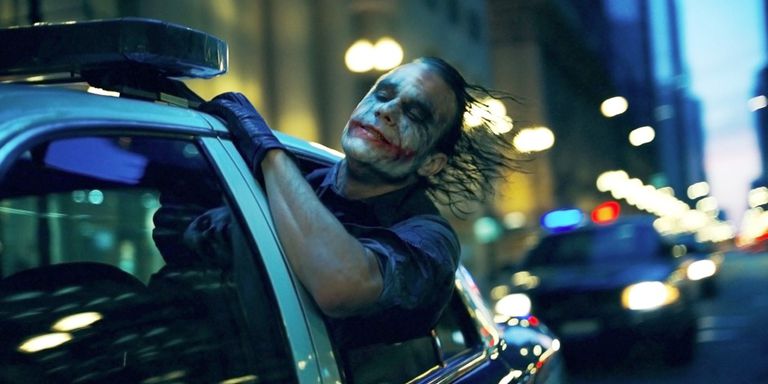 Superhero films became increasingly sophisticated and decidedly darker as they become (for better or worse) a full-fledged genre in the 2000s. With Batman Begins, writer/director Christopher Nolan (drawing inspiration from the revisionist Batman comic books by Frank Miller and Jeph Loeb) rebooted the Batman mythos for the big screen, bringing the often lighthearted hero back to the shadows, both figuratively and literally. Now, with the origin story out of the way and the obsessive hero established, Nolan delivers a pulp epic with mythic overtones for the darkest of comic book heroes with The Dark Knight (2008), a pulp tragedy with costumed players and elevated stakes and terrible sacrifices.

In a Gotham City that is part violent gangster thriller of the thirties and forties and part modern metropolis with a rotten foundation under its magnificent cityscape, The Batman (Christian Bale) has cast an aura of fear across the underworld with his vigilante war on crime. He doesn’t trust many people in the corruption-riddled halls of justice, but he takes a chance on the man called Gotham’s White Knight: crusading new District Attorney Harvey Dent (Aaron Eckhart, who brings a hint of grinning arrogance to Dent’s passion).

Shambling into the battle comes The Joker (the late Heath Ledger). With his stringy hair, greasy make-up over the smile carved into his cheeks, and garish, street-battered suit, Ledger gives us a volatile psychotic far removed from Jack Nicholson’s showboating exhibitionist in Tim Burton’s Batman. He works over his sardonic dialogue in a rumbling wise-guy whine and off-balance patter, his tongue darting in and out like a lizard, his slumping posture so at ease in the chaos of his capers it’s disturbing. He won a posthumous Academy Award and a BAFTA for his performance.

Nolan delivers the expected set pieces for a big screen superhero spectacle, from a sharp bank heist executed (in every sense of the word) with impersonal efficiency by a masked gang to a high-speed ambush in an underground tunnel to a nearly incomprehensible rescue operation where the good guys are working at cross purposes. But The Dark Knight is also a tighter, smarter, more focused film than Batman Begins and Nolan has become a more effective storyteller.

The details and grace notes – the cocky, tossed-off swagger of Bale’s Bruce Wayne at a fundraiser, followed by Wayne discreetly dumping his glass of champagne like a prop no longer necessary, or The Joker’s gangly stumble like a distracted kid trying to get a broken toy to work while explosions erupt around him – fill the outsized tale with defining moments that both ground the characters and elevate the conflicts. And just when the film seems to wrap itself up in a neatly played little bundle, Nolan upends expectations and escalates the stakes and the sacrifices.

It set the standard for superhero noir and set the stage for The Dark Knight Rises (2012), the climactic film in Nolan’s trilogy.

, iTunes, GooglePlay and/or other services. Availability may vary by service.
The Dark Knight [Blu-ray]

On Blu-ray and DVD in various editions from Warner Bros. Home Entertainment. The single-disc edition features both full screen and widescreen editions but no supplements. The “Two-Disc Special Edition” includes “Batman Uncovered: Creation of a Scene,” a collection of over an hour of featurettes on the making of key scenes (like blowing up the hospital – for real! – and a real life stunt jump from a skyscraper more thrilling than the finished scene) and versions of the six scenes shot in IMAX format presented in their original aspect ratio. Also include six episodes of the fictional new show “Gotham Tonight” with Anthony Michael Hall, galleries of art and stills and a digital copy of the film. The Blu-ray edition presents the IMAX version of the film (the IMAX scenes fill the entire widescreen TV frame) and offer optional “Focus Points” access to the “Batman Uncovered” featurettes while watching the film. It also includes the exclusive Hi-Def documentaries “Batman Tech” and “Batman Unmasked” (each run about 45 minutes but are pretty rudimentary) and more galleries of concept art.